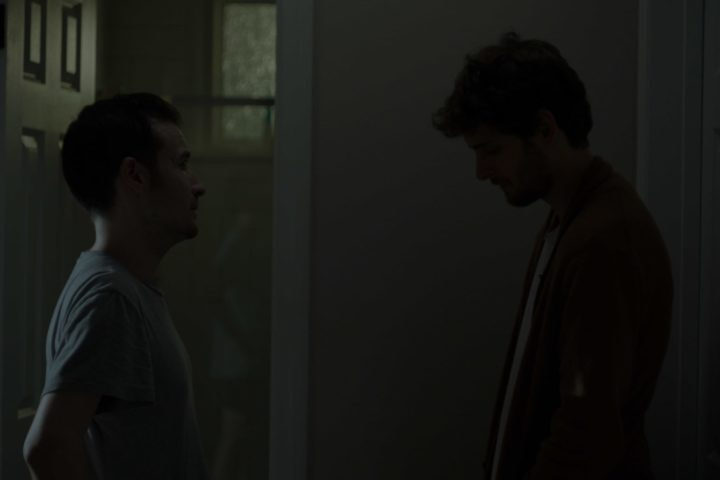 Vince and Jack are roommates and best friends who have never had anything come between them … until The Event.

One night Vince wakes Jack up because Vince is having an existential crisis. He can’t eat, he can’t sleep, and he needs Jack to answer perhaps the most important of life’s questions right that very moment:  “Why haven’t you watched my short film yet?” Frank Mosley and Hugo De Sousa co-directed the comedy short The Event, written by De Sousa and making its world premiere at Slamdance 2022. Though De Souza and Mosely each have experience directing short films, The Event is their first collaboration.

De Sousa, a 32-year-old who has lived in Los Angeles most of his life but originally hails from Portugal, had been a fan of Mosely’s work since he saw the latter’s short film, Parthenon, which played at Slamdance 2016 and had wanted to work with Mosley ever since. Meanwhile, Mosley, a 38-year-old, Texas-to-LA transplant, had seen De Sousa act in a film called Everything in The End, which was written and directed by a mutual friend, Mylissa Fitzsimmons. Mosley was quite taken with the performance and wanted to work with De Sousa as an actor, but it wasn’t until a little over a year ago that the two men actually met when Fitzsimmons asked them both to take part in a table read for a script over Zoom.

“After the zoom meeting, I reached out to him and we started talking,” De Sousa says. The two hit it off quickly, swapping links and watching each other’s work. De Sousa started pitching Mosely a new idea every week until finally, he hit upon the concept of two roommates divided by the issue of why one won’t make time to watch the other’s short film. “I just couldn’t stop laughing,” Mosley says. “It was like, ‘That’s it!’ It was magic.” The concept behind The Event is a universal one for any fledgling filmmaker:  You pour hours upon hours of blood, sweat and tears put into a film and you think you just might have something special, but talking anyone into sitting down and viewing the finished product can be more difficult than making the movie itself.

“It’s a theme,” De Sousa says. “It’s impossible to convince strangers to watch your stuff, but what’s funny to me it’s that it’s also impossible to convince people that love you, that really want to support you, to watch your stuff because they can watch anything.” De Souza believes that particularly in the streaming age, when the average person’s access to on-demand content of every conceivable type is readily available, the struggle a filmmaker faces in trying to get friends and family to watch their movie is more difficult than ever. “They can watch literally any film ever created,” De Sousa says, “so even though they want to support you and they really love you, somehow it’s hard to find the time. I think both Frank and I have been on both sides of that argument.”

The trick behind making The Event’s comedy work was to play it straight,  “treating this ridiculous subject like it’s life or death,” Mosely says. De Sousa’s hilariously earnest performance and flawless sense of timing, turning every line of the clever dialogue into comedy gold. Mosely, as the exasperated friend, gets his biggest laughs from what he doesn’t say, making each defensive and befuddled facial expression speak volumes.

The Event may be the first film that Mosely and De Sousa made together, but it won’t be the last. “We just wrapped a new short two weekends ago,” Mosley confirms, until De Sousa jumps in to correct him, insisting that it was only one weekend ago, and Jack and Vince’s dynamic is immediately apparent in their real personalities. They sincerely are each other’s biggest fans, and Mosley promises that the new film, which he describes as a “hilarious one-man show” starring De Sousa, will be an “Event” all its own.