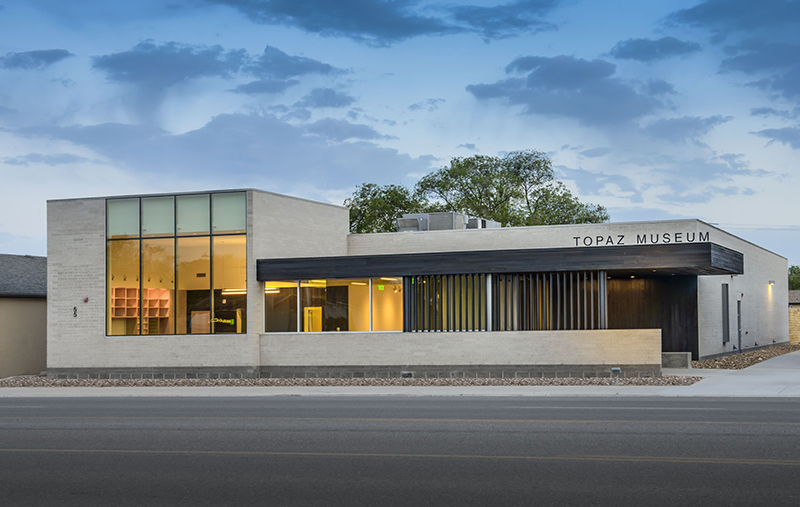 Between 1942 and 1945, an empty, sandstorm-ridden desert expanse came to life, but it did so within barracks, barbed wire and armed guards. This was the Topaz War Relocation Center, located just 16 miles outside of Delta, Utah: 42 blocks of makeshift abodes built post–Pearl Harbor to intern over 11,000 Japanese immigrants and Japanese Americans, largely from the Bay Area. The Topaz Museum enshrines the stories of those interned. Located on Delta’s Main Street, the Topaz Museum is now home and testament to about 120 pieces of art created by internees; countless artifacts and documents; telling films and photographs; and, behind the building, an actual barrack from the Topaz site.

This July 7 and 8, 75 years after Executive Order 9066 forced 120,000 people of Japanese descent into internment camps, the Topaz Museum will host its official grand opening. Featured speakers include Don Tamaki, one of the civil rights attorneys for Fred Korematsu’s Supreme Court case, and Dr. Franklin Odo, former director of the Smithsonian Institution’s Asian Pacific American Program. The grand opening is an exciting, well-deserved celebration of Topaz Museum’s long journey. “I’ve been working on this project since 1982,” says Topaz Museum Board President Jane Beckwith. “It started with my journalism students at Delta High School. I asked them to do a project on Topaz.” The classroom enthusiastically set to work, and the project grew. “After a while, it was clear that nobody was doing a museum about Topaz,” says Beckwith. “I thought it was such a big part of Utah history—of national history—and it evolved from there.” With other volunteer board members, Beckwith raised money to purchase the Topaz site, now a National Historic Landmark; presently, the Topaz Museum owns all but eight acres of the site, preventing any adverse development and building on the land. In May 2014, construction finished on the Topaz Museum building. Designed by Salt Lake’s Sparano + Mooney Architecture, the structure is modern and open, with soft lighting and material details like concrete masonry and black-charred cypress wood. In January 2015, after hiring a curator, Topaz Museum opened with an inaugural exhibition in its 3,700-square-foot gallery space: a collection of art created and donated by Topaz internees.

During that time, the Topaz Museum team worked tirelessly to continue to raise money and collaborate with the Oakland, California–based West Office Exhibition and Design, with whom they’d worked since 1994. “We were writing text, finishing the design and reviewing, reviewing, reviewing,” says Beckwith. “We presented to West Office what artifacts we had, what stories we thought were significant.” The result, Topaz Museum’s second exhibition, is more historical and interpretive than the first, presenting a wide-ranging, chronological exploration of the events before, during and after the unconstitutional internment of Japanese and Japanese Americans. “There are layers within this history,” says Beckwith. “There’s this misconception that everything that happened to Japanese Americans was a total product of Pearl Harbor. There were so many long-standing racist laws before that against Asians—we wanted to tell that story, too.”

The first exhibition space inside Topaz Museum is a screening room with two videos. One features clips of Dave Tatsuno’s film—one of two home movies accepted into the Library of Congress—which comprises firsthand looks into life within the camp, from relentless Utah desert sandstorms to bittersweet Christmas mornings. Down the hallway is the larger exhibition space, which presents the timeline of Topaz, starting with a large group portrait of the Mochida family, who bore tags around their necks “like their luggage.” Nearby is a text panel about Takao Ozawa, who was denied eligibility for American citizenship by the Supreme Court because he wasn’t considered white. There’s also a Dr. Seuss cartoon with racist depictions of Japanese people as spies, and a photograph of a woman in Hollywood who points at a large banner: “JAPS KEEP MOVING; THIS IS A WHITE MAN’S NEIGHBORHOOD.” Ahead in the gallery are glimpses into camp life: a re-creation of an oppressive Topaz living space, collections of internees’ belongings, art—including Miné Okubo’s expressive, drawn chronicles and compositions—created within confinement.

The interactive, multimedia exhibition makes for powerful remembrance. “We wanted for [visitors] to feel like they knew more about the people, the personalities, that were in Topaz,” says Beckwith. “These are still very vibrant stories—we know that this is not a dead issue.” Visitors can flip through the thick pages of a Topaz literary journal and high school yearbook. They can read about how the internees founded a successful co-op, but they can also listen or watch, flinchingly, to interviews with Topaz internees. Still, there are the glimmers of hope and resilience, like the story of artist Chiura Obata, who opened an art school within Topaz.

Topaz Museum ties together its rich stories and solemn subject matter with a reflective, educational approach, serving not only as an impactful tribute but also a necessary and timeless call to action. The museum’s mission is about preservation and historical interpretation. It’s also about the education and outreach required to “prevent a recurrence of a similar denial of American civil rights.” Toward the end of the on-view exhibition, the Topaz Museum poses one particularly affecting, forward-looking question for viewers: “Could an injustice like Topaz happen again in our country?”

For tickets and more information about the July 7 and 8 Topaz Museum Grand Opening, visit topazmuseum.org and  eventbrite.com.