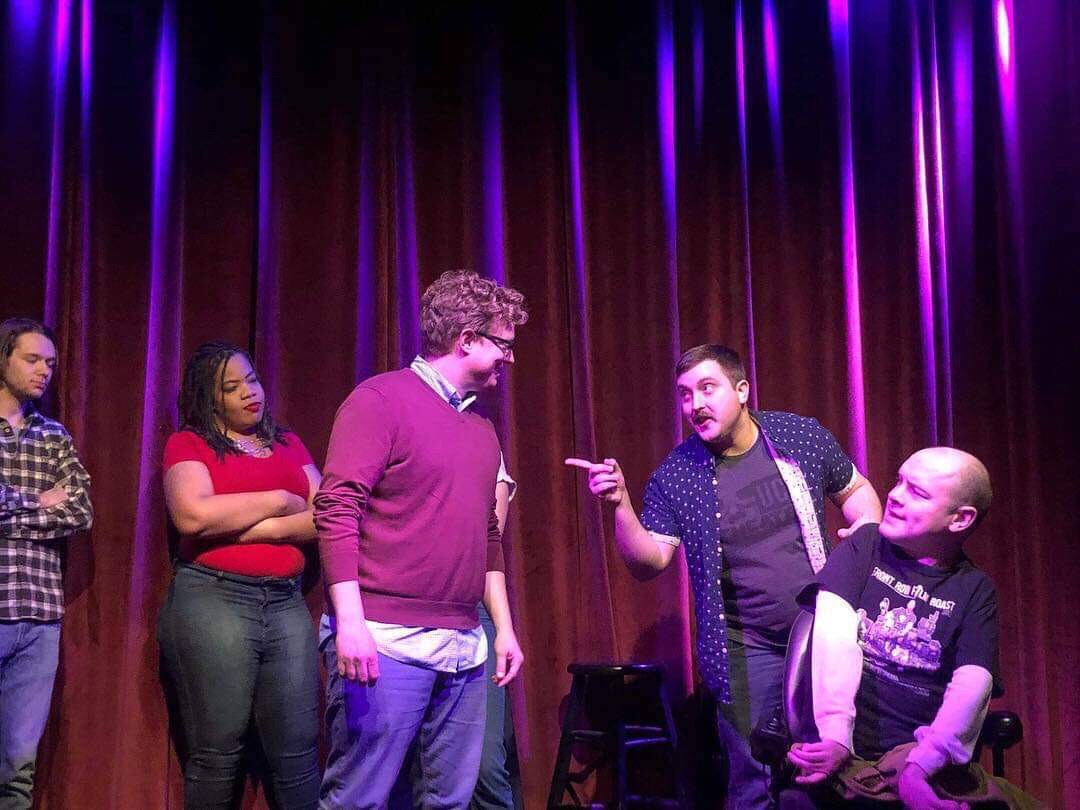 Crowdsourced Comedy is a unique, audience-generated experience from some of Utah’s most seasoned and talented improvisational comedians. No two shows will ever, or can ever, be the same. This isn’t your mother’s improv either—with this troupe no topic is taboo. Crowdsourced Comedy puts on regular showcases, charity events, improv classes and can even been seen at corporate events or birthday parties. This is wit and humor as fast as you can yell a suggestion. The audience is always part of the show. The four troupe members of Crowdsourced Comedy are Andrew Sproge, Jessica Sproge, Craig Sorensen and Trevor Kelley.

The troupe got their start nearly a decade ago when a group of improv comics and friends got together in Utah County and decided to do a show. “We used to do improv together in Provo,” says Sorensen. “We kind of trained together. We went across the country [and] did a lot of workshops together. We did shows and eventually we got to the point where we were wanted to do this on our own and our way … When you do shows in Utah County it’s very family oriented. So we’re like—’Let’s go to Salt Lake and say the ‘F’ word!’”

They branched out into “Improv for Adults” as Andrew Sproge calls it. With the move from Utah County to Salt Lake City three years ago, the group found more opportunities to do shows in alternative venues—like bars and comedy clubs—places where they can attract the kind of audience members they love. “We want to talk about the issues and things going on in our world today from an adult’s perspective,” Andrew Sproge says. What sets Crowdsourced Comedy apart from traditional improv shows is that they aren’t just getting a one word suggestion from the audience. They really try to get to know the audience, their pasts, their passions and their stories. This is what they will base their scenes on and why they are “Crowdsourced”. “The best improv scenes are when the audience is involved—heavily involved—that was the genesis of Crowdsourced.” Sorensen says, “We want to pull them up, we want to get their stories, we want them to feel like they are [a] part of the show. Maybe they aren’t the star performers, but without them it would just be us trying to do some other type of comedy.”

In addition to regular shows, the Crowdsourced Troupe teaches Improv 101 and 201 classes at Sugar Space Studios in Salt Lake City. “As people progress we add them to our performers group to join us on stage,” Andrew Sproge says. The next 101 class starts May 14th  for the cost of $125. “People can pay as they go,” says Andrew. “We try to make it affordable because most people who are trying to get into acting or comedy are broke like we are.” The class runs for five weeks, and includes a student graduation show. The 201 class is on Tuesday nights once a comic gets down the basics. Anyone is welcome to come try out the 101 class. Andrew states that they have everyone from comics, to salesmen, to realtors and even psychologists. “The class can be for performers as well as people who just want to get outside of their comfort zone,” he says.

The main Crowdsourced Comedy Troupe consists of anywhere between 15 and 20 main players. The current roster includes a great list of regularly performing comedians, including Jasmine Lewis, Brian Higgins, Jeff Sproge, Hollie Jay, Maddie Bell, Amerah Ames, Adam Conrad, Arash Tadjiki, Dallas Briggs, Wallace Fetzer and Ivan Bigney. The troupe acts like one big family. As Andrew puts it, “The best improv shows are the ones where it is so clear that everybody is friends and they’re really having a great time and it’s so comfortable.”

Crowdsourced Comedy takes pride in having a diverse cast of players. “I have always felt that we really pride diversity,” says Jessica Sproge. “Improv is very white, straight and male-based. I feel like we want diverse people … We love people with different backgrounds—the same background is so boring,” she says. They make a concentrated effort to make sure that all groups of people are represented through the Troupe. Andrew Sproge adds that anybody can be an improviser. “We want people from all walks of life, because that makes the improv all-walks-of-life-improv.”

On May 7 they will be putting on a benefit show for Planned Parenthood benefit show featuring an all-women cast. “With the PP show we are only doing a woman cast because we want to highlight the women in the comedy world,” says Jessica Sproge. This show will be at 7:30 P.M. at Wiseguys Downtown Salt Lake. It’s a $5 donation with proceeds going to Planned Parenthood of Utah, who will also be in attendance with some cool swag.

You can see the next Crowdsource Improv showcase Tuesday, April 23rd, at 7:30 P.M. at Wiseguys at The Gateway, where they will be getting tons of suggestions and stories from the audience. The cost is just $5 at the door. “It will be tons of fun, and we desperately need people there to give us these suggestions because you guys are going to fuel every single scene that we do,” says Andrew Sproge.