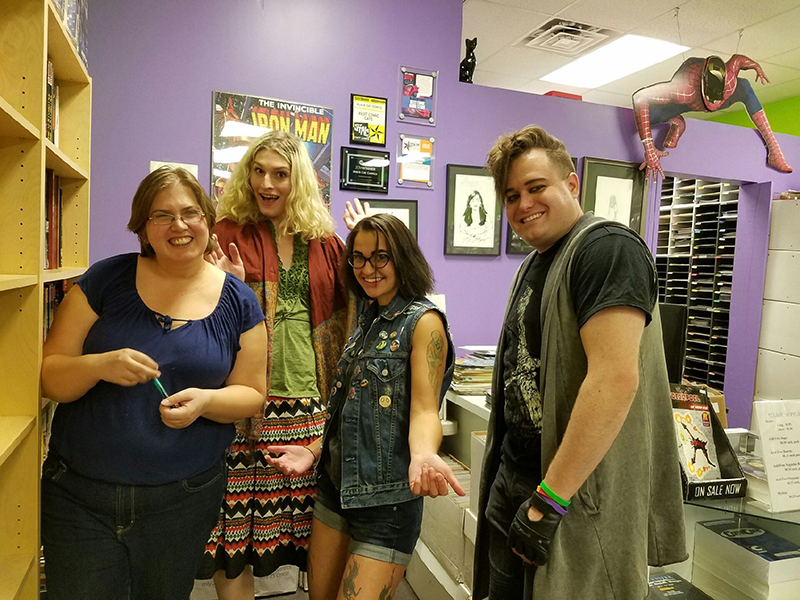 On Sept. 10, Black Cat Comics and the 1 to 5 Club (a suborganization within the Pride Center that offers a safe space for bisexual, pansexual, omnisexual, sexually fluid and asexual topics) teamed up to host an impromptu comic book panel. It was all smiles and support in the packed store. Hosting were employee Taylor Hoffman (my girlfriend, so freely assume any compliments paid her are sweet nothings), and 1 to 5 members Michael Timothy, Stephanie Novak and Cassandra Webb. The subject in greater detail: the representation of minority sexual and gender identities in the floppies.

Like any religion worth its pillar of salt, everyone has their personal revelation that drew them into the world of comics. For Timothy, it was the X-Men—after all, “x” is the symbol de rigeur for variable alternatives. Novak started young but blossomed only recently: first with grocery store Betty & Veronica digests and more fully with The Adventures of Superhero Girl. Webb has followed Novak’s lead into more diverse and complex independent fare such as, surprisingly, Jem and the Holograms. Hoffman’s was born again when Superman saved a suicidal girl’s life in All-Star Superman. A common thread unites their passions and focuses. All four found within comics a purchase for explaining their own abnormalities, shunned by some as freakish but celebrated as gifts in “four”-color panels.

Comics weren’t always a refuge for the Others among us, as Timothy explains. In 1954, psychiatrist Fredric Wertham published the suburban housewife thriller Seduction of the Innocent, in which he alleged that comics were corrupting children toward deviance. Most famously, he condemned the homonormative relationship Bruce Wayne and Alfred Pennyworth shared in raising Dick Grayson. His argument was that between the implicit suggestion the nuclear family was unnecessary and the sheer shock quotient of contemporary horror comics, these salacious rags would have America’s children gleefully following their beloved Batman into a life of sin and debauchery. I must say, looking at my own life, he wasn’t strictly wrong, but times change and the debate has, too. As the book gained serious consideration, what was eventually argued within the very halls of Congress as Homo v No Homo has since become Homo v Fuck Yes Homo. In other words, what Wertham feared is now celebrated among outcasts that weren’t “turned queer” by the Dark Knight but saw, in all his fetish-suit glory, one of their own. Despite the self-loathing decades of self-policing, comic books have since become rallying cries for the disenfranchised.

Like any academic worth his pillar of pepper, Timothy asked the rest of his panel, “So what?” as in, “Why is representation important?” The answers weren’t surprising. Novak cited Nichelle Nichols’ landmark portrayal of Uhura in Star Trek, which famously inspired black women such as Whoopi Goldberg to pursue their dreams without fear. Webb, a trans woman, emphasized the tangible-effect acceptance of icons like Caitlyn Jenner and Laverne Cox have on how the average person treats her. Hoffman’s answer was masterful salesmanship, though doubt not her sincerity; comics are for everyone, and more to the point, there’s a comic for everyone.

Of course, comic books are stereotyped as being for vanilla (white, cis, hetero, male, etc.) nerds for a reason, and Timothy further wanted to know how sometimes tactless creators portrayed a subgroup negatively. For his 2 cents, he offered the flamboyance of Batman villains the Joker and the Riddler and the implicit negative association with queerness. Webb, in turn, celebrated the union of two other Batman villains, Harley Quinn and Poison Ivy. Novak stressed the importance of actual depth in the characters, such as bisexual Ian in Patsy Walker aka Hellcat! who somehow successfully avoids having random threesomes each issue. There was some debate as to whether Iceman’s recent conversion in the pages of X-Men (but who can tell which title these days without basic Googling?) to homosexuality was a positive or negative example. Is his being forced out of the closet and the ignored potential for bisexuality, pansexuality, etc. a cartoonish caricature by straight writer Brian Michael Bendis, or does his sheer recognition excuse such clumsy handling? I’ll leave further judgment to God and any reader that’ll play to that throne.

The evening covered a range of further questions from the panel and the audience, and Hoffman had a specific and tailored suggestion for every interest. If your interest’s piqued and their testimony has convinced you there may be something in these funny books you’ve been looking for, Black Cat Comics (blackcat-comics.com) would be happy to have you and your questions. The 1 to 5 Club (utahpridecenter.org/event/1-to-5-club/all/) shares that sentiment, and there’s no implicit request for patronage either—just donations. Cynicism aside, rest assured that if this panel proved one thing conclusively, it’s that both communities accept superheroes of every stripe with open arms.