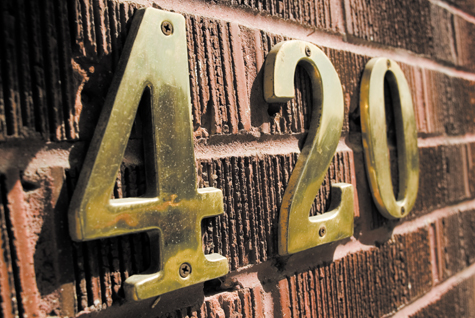 4:20. 4/20. 420. They can mean a time, a date, or a stoner mating call on any social networking site.  When someone uses this term, you can bet on one thing: they’ll totally scrape the shit out of your pipe given the opportunity.  Where did this 4:20 term come from?  Some claim kids getting out of school got high at that time. Old farmer’s almanacs say it’s the best day of the year to plant hemp. Others will try and persuade you between bong hits that it’s the cop code for weed activities.

To find out just what 420 means I sat down with Robert Nelson, DJ of KRCL’s Smile Jamaica, a reggae program that’s been airing from 4 to 7 pm every Saturday for over 20 years.  During his shows you can always catch a tasty Cannabis Service Announcement (CSA) at 4:20, and this year his 4/20 show will be airing on the nearest Saturday, 4/18.  Robert confirmed my research: it’s not a cop code, nor is 420 the number of chemical compounds found in TetraHydroCannabinol, or THC, the fun stuff in marijuana that makes you feel good. According to Mr. Nelson, 4:20 dates back to the ‘70s. Kids would get out of school, get home, get their sack, meet up with friends and smoke out, always happening to finish at 4:20.  This would give the young stoners-in-training enough time to get back home and douse their eyes with Visine and fill their pockets with dryer sheets before the parents came home from work.

It sounds like a perfect little story, but after searching Wikipedia and discovering that the 4:20 entry was created by someone from the Bay Area, I’m gonna call bullshit. You see, anyone from San Jose, Mountain View, or San Mateo will tell you they’re from San Francisco, and then try to convince you the cradle of civilization, Mesopotamia, the fucking Garden of Eden started right there in the Bay.  It’s the biggest flaw in this whole story.  If some hippy kids from Bakersfield, Riverside or San Bernadino would have made the Wiki entry I might have believed it, if I didn’t already know the term 4:20 was a fucking sham.

You see, the first time I’d ever heard of an integer used as code for cheeba I was 19.  I was going on a long backpacking trip through the Bear Tooth Mountains, and a friend of mine who had first wet his palette on the sweet Sativa in the ‘60s was organizing the trip. All of us going on the trip were given a list of must-have supplies for the trip, one of which was 4:12.  I knew what everything on the list was but that, so I had to ask, and he patiently explained to me that 4:12 was ,well, 4:12. You know, pot, bud, chronic, smoke, ganja, herb, grass, B.C Buddah, chocolate Thai, trees, sticky icky, hydro, the shit, dank, kinde, nuggz, green, Jerry’s Pubes, you know, the black damp!  But why?

“Well Cinnamon, in the sixties it would take us ten minutes to walk, bike, or drive home from work here [in Salt Lake].  Then it would, or at least it should only take you about 2 minutes to twist up a joint.  My friends and I all got off work at 4, so it just made sense, 4:12.”

A few years after I learned the ways of 4:12 I started seeing a ton of VW Buses with 4:20 stickers on them and hippies pan-handling with signs that said “4:19 Got a Minute?”.  It confused me– was 4:20 the same as 4:12?  I shrugged it off, thinking that since the ‘60s people moved further from their workplaces and commute time must have gone up, hence the new time to get high.  But by my calculations, it seems the time should just keep getting higher and higher. If it went up 8 minutes in 30 years, then we should be looking at the high time changing to 4:26 in the next few years. But given urban sprawl, extended work days, the lack of decent mass transit in the valley and traffic jams, maybe 5:15 would be the norm for the next decade.

I investigated further into the number, and apparently the term 4:20, although created after 4:12, had caught on  with the public much easier.  Try saying them aloud – 4:20 rolls off the tongue as easy as a Zig-Zag, and has a bit more authority and a hint of eloquence compared to 4:12 (well, only if you say them while high).  The really big push for 4:20 turns out to be the singer/songwriter and Grateful Dead guitarist Bob Weir, also known as “The Gentle Handler.”

Bob saw the marketing potential of 4:20 for the counterculture.  Entrepreneurs at Dead shows were making a killing off the numerical term, and Bob was hungry for a piece of the pie.  A CEO from the GAP happened to be a big Dead fan, and had toked backstage with Bob, so after few phone calls and within days, sweatshops in China were pumping out these elevated digits on all sorts of gear.  The key to Bob’s idea was to hire Heads to do the selling in the lot, claim they’d screen printed the shit themselves and, of course, keep GAP tags off all of the clothing.  It was a scam, set up to prey on folks that could tell the difference between live recordings of “Space” but wouldn’t know good music if it popped out of their steamroller and bit them on their bong hole.

I didn’t want to open this can of ammonia soaked compressed Mexicali, but I think it’s about time the truth finally came out.  4/20 is coming up this month and there are plenty of parties going on, like the Aztec Highway-sponsored 4/20 party at The Huka Bar in Murray. You could educate yourself on drug laws at the City Library (210 E. 400 S.) by checking out the screening of American Drug Wars, The Last White Hope at 7 PM.  Maybe you just want to throw your own four-twenty party at home, but the only day you should hold it is on 4/20.  Don’t Utah-fuck the holiday to a weekend, like Provo does to New Years Eve if it lands on Sunday.  The way I see it, if you puff then it’s pretty stupid to just go all out and smoke on that day. Shit kids, you’re already smoking every day right? Take 4/20 off and give your lungs a break. Maybe give meth a try for a change.