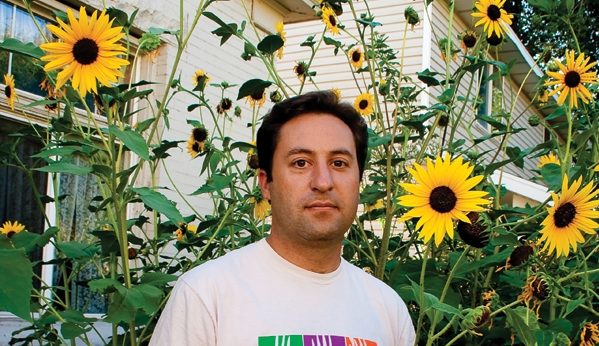 A Sunday at the Market

Ah, it’s another beautiful Sunday afternoon at the market. The cool fall breeze is blowing through the gardens. Kids and adults are sack-racing. One of the vendors is taking a break for a moment to huck a few lines in the skatepark. Fresh produce is available all around, along with all sorts of unique and handmade crafts. The lady over there is offering a free coconut hand scrub, and the group meditation is going to start in 20.

Wait—which market are we at again?

Welcome to the People’s Market. Every Sunday morning and into the afternoon, vendors and farmers from all around the Salt Lake Valley and beyond gather at the Peace Gardens on 1000 West and 900 South to sell their produce and wares. All of this hoopla was started four years ago by Kyle LaMalfa selling produce on a lone card table just a few blocks down the street from his home. “A couple people came to that, really not too many,” says LaMalfa. As it went on, attendance began to increase. Some people expressed interest in selling their own goods. Others offered services for the market, such as painting signs and advertising it in newsletters. “Before you knew it, there were people that started wanting to give more and more. It just sorta took off on its own two feet.”

As the People’s Market grew over the years, it found its current home at the Peace Gardens. “It was the best place on the west side that had the right shade, and it was close to the parkway,” says LaMalfa, who also mentioned the other amenities the park has to offer, such as the skatepark and the gardens themselves. The location was also a great place to serve as a central meeting place for the neighborhood. “We wanted to build a community and create something special for the neighborhoods that, for a large part, have a bad reputation,” says LaMalfa.

“Before you knew it, there were people that started wanting to give more and more. It just sorta took off on its own two feet.”

Grown from that single table of produce four years ago, the People’s Market now sports dozens of tables selling an impressively wide array of goods. Any sort of produce, from green onions to tomatoes and squash, can be found from both farmers and home-gardeners alike. Alongside those edible goodies, one can find anything from handmade soaps and scrubs to children’s toys and metalwork. There are very few restrictions as to what can be sold at the market. “You don’t need a business license, but things you sell must have been created by you,” says LaMalfa. No one is allowed to sell things that are imported, and there are no yardsale-type items either. “You’ve gotta have your creativity embodied in that thing that you’re selling on your table, whether you grew it, baked it, painted it, sculpted it, whatever.”

Among the many booths you find at the People’s Market, one of the most notable ones is LaMalfa’s very own produce table. At his home, LaMalfa has managed to grow an absolutely breathtaking garden. Nearly any produce one could imagine can be found in this garden, ranging from tomatoes and squash to hops, herbs and even nearly a dozen beehives. Every Sunday before the market starts, LaMalfa harvests a load and sells them at his table. “My booth is sorta like One World Café: Take what you need, pay what you can. I did it last year and made enough money to keep that system going,” says LaMalfa.

In addition to the booths and tables at the People’s Market, you can expect to see all kinds of unique events taking place there every Sunday. “There’s live music all day, and sometimes we have a meditation,” says LaMalfa. He also mentioned the contests they often hold, such as the paper airplane contest and sackraces, which always gain the attention of the youngins. Another great opportunity the People’s Market offers for the 17-and-younger crowd is the chance to be a vendor for only $1 a day. LaMalfa says this idea is to foster young entrepreneurs who might not get that chance elsewhere.

“The other thing that we like to do is party,” says LaMalfa. Four parties are held every year at the People’s Market. “ We have a seed exchange party in January, a season kickoff party in June and an end-of-season party in October.” This year, they’ve added a new party called “The Crop Swap,” which will happen on Sep. 12 and 13. Contributing to the “Eat Local Challenge,” where one attempts to eat only locally grown foods for one week, LaMalfa said that the premise of the party is to bring your homegrown veggies and goods to the market and swap them with other attendees.

“We wanted to build a community and create something special for the neighborhoods that, for a large part, have a bad reputation.”

The People’s Market happens every Sunday from 10 a.m. to 3 p.m. at the Peace Gardens, located at 1000 West 900 South, from June 14 to Oct. 24. Some events coming up are the Harvest Swap Party on Sep. 12 and Job Fair Day on Sep. 27. If you want a more relaxed atmosphere than the Downtown Farmer’s Market, or just want to check out the scenery on Salt Lake’s west side, come check out what the People’s Market has to offer. Anyone is encouraged to set up their own booth. More information can be found at slcpeoplesmarket.org.