00:00 / 16:39
Spotify Stitcher
RSS Feed
Share
Link
Embed
After over a decade of practicing yoga while pursuing various careers and ambitions, it dawned on Sybil Buck that sharing her love of the practice (and love of life) was truly what she wanted to do. She decided to put in the hours and training to become a certified yoga instructor. “[When I tried it,] I felt at home in my skin in a way that I had never previously felt, or at least not since I was a kid—it was fun,” says Buck.

A Woman of the World: An Interview with Sibyl Buck 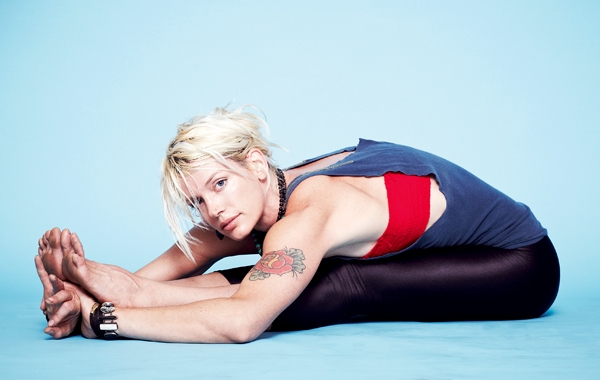 Sybil Buck has worn many hats in her life. As a teen, she was an amateur skater and musician; as an adult, she has worked as a model, actress, musician and as a dedicated yoga instructor.

After over a decade of practicing yoga while pursuing various careers and ambitions, it dawned on her that sharing her love of the practice (and love of life) was truly what she wanted to do. She decided to put in the hours and training to become a certified yoga instructor. “[When I tried it,] I felt at home in my skin in a way that I had never previously felt, or at least not since I was a kid—it was fun,” says Buck. “When you’re a kid, you’re not lazy about playing because it’s so fun, it motivates you to get up and run around … You are fueled by the love you have for the playing. That’s how I felt about yoga. I could never force myself to go to the gym, but yoga was just so inspiring … I wanted to go do it.”

Noticing all sorts of positive changes in her body and life sealed the deal. “I knew it was a medicine as well as an exercise. When I stopped touring … I started doing yoga every day just to keep my head together, and I realized how great it was,” she says. After years practicing with several well known and admired teachers, such as David Life and Sharon Gannon in NYC, as well as Annie Carpenter, Jasmine Lieb, Vinnie Marino and Lisa Walford in California, she completed the 200 hours required to be certified and made it
her profession.

As luck would have it, one of our own local superstars is buddies with her. Lindsay Heath, multi-talented musician and artist extraordinaire, collaborated with Buck on some musical endeavors. With local yoga aficionado (and Centered City Yoga owner) D’ana Baptiste, they have conspired to set up a yoga workshop for us Salty City dwellers to gain some of the wisdom and world-view from Buck, firsthand. The workshop promises to be both physically and spiritually engaging, with a conscious focus on anatomically correct posing and the opportunity to subconsciously glean from the experience that Buck has had while meditating. “I’m really interested in [teaching] the kind of yoga that makes people feel good and get well. I have a lot of life experience to bring in, and this particular workshop is about integrating your yoga practice into your life.”

As a teenager, the then-skater and musician, Sybil Buck, decided that, to be able to survive and thrive in a metropolis destination, which was her goal at the time, modeling would be her means to an end. Through hard work and ambition, she managed to earn more than a living from strutting her stuff on catwalks throughout Europe and beyond. That wasn’t all Buck was looking for. Once she had made the money she set out to make, she turned her attention back to her love of music. “I always really loved music. I started playing bass in high school and I loved it … I went off to be a model, and I really missed playing so badly. I knew that [music] was what I wanted to do next.” She turned a childhood hobby into a reasonably successful career as a bassist for several projects, some with other well known musicians. A brief stint as an MTV VJ and a quick dive into the world of film acting with a role in the major motion picture, The Fifth Element, kept her busy and in the limelight for a couple of years, and certainly lent her the credibility needed if she ever wanted to pursue it further. During these sometimes-chaotic and stressful times, she found herself returning to yoga again and again to maintain and sometimes restore sanity and balance into her life.

With all of her life’s work in mind, Buck’s goal as a yogi is to exemplify how to incorporate yoga into our increasingly busy and chaotic lives. As far as lifestyle choices go, she is not one to push her own perspective or ideals down her students’ throats, and instead encourages clients to consciously choose their own lifestyle. It’s not productive to abruptly alter behaviors, she says. Rather, she encourages consciousness in
all choices.

With future dreams and goals, including the possibilities of creating community-style yoga retreats, Buck continues to live life to the fullest, a shining example of how to get the most of your experience on Planet Earth. Still, she says her proudest achievement is her daughter, just one of the many indicators of how she manages to maintain a healthy and balanced perspective.