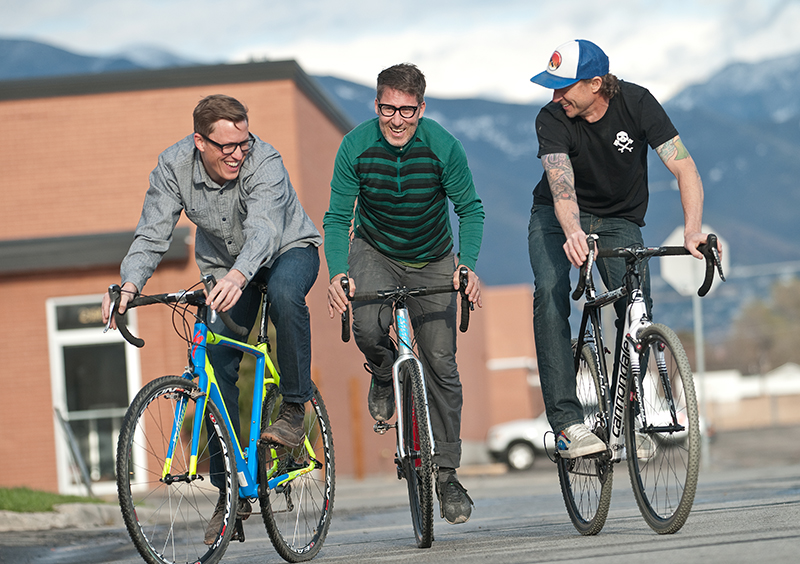 Cyclocross: All the Dirty Deets from Los Playboys Internacionales

If road racing had sex with mountain biking, their love child would be cyclocross. OK, now stop thinking about bikes doing it—that’s weird. Cyclocross is a hybrid type of biking that involves racing on a one to two-mile-long course over pavement, grass, dirt and various obstacles. Races are typically an hour long, and it’s all about how many laps you can pack in. Sound grueling? Yeah, it is. And what gives cyclocross its edge is that the season starts in early autumn and pushes into winter. So slap some wind, rain, snow and even hail on top of it all, and these riders aren’t fussed in the least. According to local cyclocross team Los Playboys Internacionales, that’s what makes the sport great.

“Being rainy and muddy is just a given,” says Playboy Jeff Juip. The other two Playboys, Tony Church and Nikos Sawyer, nod in agreement. “Early races can almost feel silly because it’s sunny and everyone’s in shorts, and it’s just like a road race or a mountain bike race,” says Sawyer. “The cross racers definitely start to get pumped as the weather gets worse. The racing becomes more dangerous and just more competitive.” Sawyer then goes on to explain that as the course changes, so does the race, giving good bike handlers a chance to move into the lead—whereas up until this point, perhaps only the strong riders would’ve been ahead. Church chimes in to say, “I’ll check the weather all week before a race and get excited when it says 80-percent chance of rain.” Where other sports live in fear of inclement weather, cyclocross basks in it—the muddier, the better.

When I asked the guys if they bring water bottles or use Camelbaks, they sort of laughed at me. “There’s no time to drink,” says Church. “If there is any flat part or downhill section, it’s usually so bumpy that if you’re not pedaling, you’re trying not to crash.” And it’s not just the weather and the gnarly course that the riders have to watch out for—it’s the spectators, too. “Unlike a road race where, once the peloton goes by and you might not see them for the rest of the day, with cyclocross, people are coming around every eight minutes,” says Church. “People will try to distract you when you’re racing by handing out dollar bills, bacon, donuts, beer … There’s also a lot of cruel heckling, too. Heckling is a big part of cyclocross.” From the tone of his voice, however, I can tell that it’s a loved—not loathed—aspect of the sport. What’s unique about cyclocross, according to Sawyer, is that “… all the aggression is on the course,” he says. “It’s a friendly sport—no attitude. You can show up for your first race and feel like you’ve got friends.”

Originating in Europe in the early 1900s, cyclocross evolved from road racing as a way to keep riders in shape once their racing season was over. When asked how the sport found its way to Utah, Sawyer joked, “I think it came here on a Mormon handcart.” It might not be a handcart, but cyclocross racers are skilled in hauling, hoisting and carrying their bikes over various obstacles. Although you’re welcome to race any bike you like, most cross racers invest in a cyclocross-specific bike. “It’s skinnier than a mountain bike but fatter than a road bike,” says Church. Juip goes on to describe a bike with a higher bottom bracket and knobbier tires.

If you’re lucky enough to be on the Los Playboys Internacionales team, you’ll get to wear matching lycra jerseys. The team is sponsored by a slew of local vendors, including We Like Small, Red Rock Brewery, Wasatch/Squatters Brewing, The Green Ant, Signed & Numbered, Blue Plate Diner, SLUG Magazine, Excel Sports, Cane Creek and Sawyer & Church Woodworks. Los Playboys are composed of 12 to 14 racers, both men and women, all of whom are subject to a strict hazing policy. When asked about said hazing policy, Church says, jokingly, “It involves a lot of bourbon.” Juip laughs at this and tells me recruitment for the team is organic: “We just kind of run into people who are interested,” he says. While there are several racing teams throughout Salt Lake City, Los Playboys Internacionales is one of the only teams that specifically focuses on cyclocross.

The team name came from Church, who saw it a long time ago on the back of a T-shirt. He says, “The back of the shirt said ‘Los Playboys Internacionales,’ and it was just a cool-sounding name. I thought it was funny, since I’m not really international or a playboy.” According to Sawyer, the race announcers love the name, too—probably because it rolls off the tongue like butter.

If you feel like cheering for Los Playboys Internacionales, you can find the team’s racing schedules by checking out race2wheels.com or ptowncross.athlete360.com. You can also find them on Facebook. If you’re feeling spicy and want to give cyclocross a try, Juip suggests contacting your local bike shop or signing up for a cyclocross clinic. Just remember that it’s a dirty sport—but somebody’s got to do it.