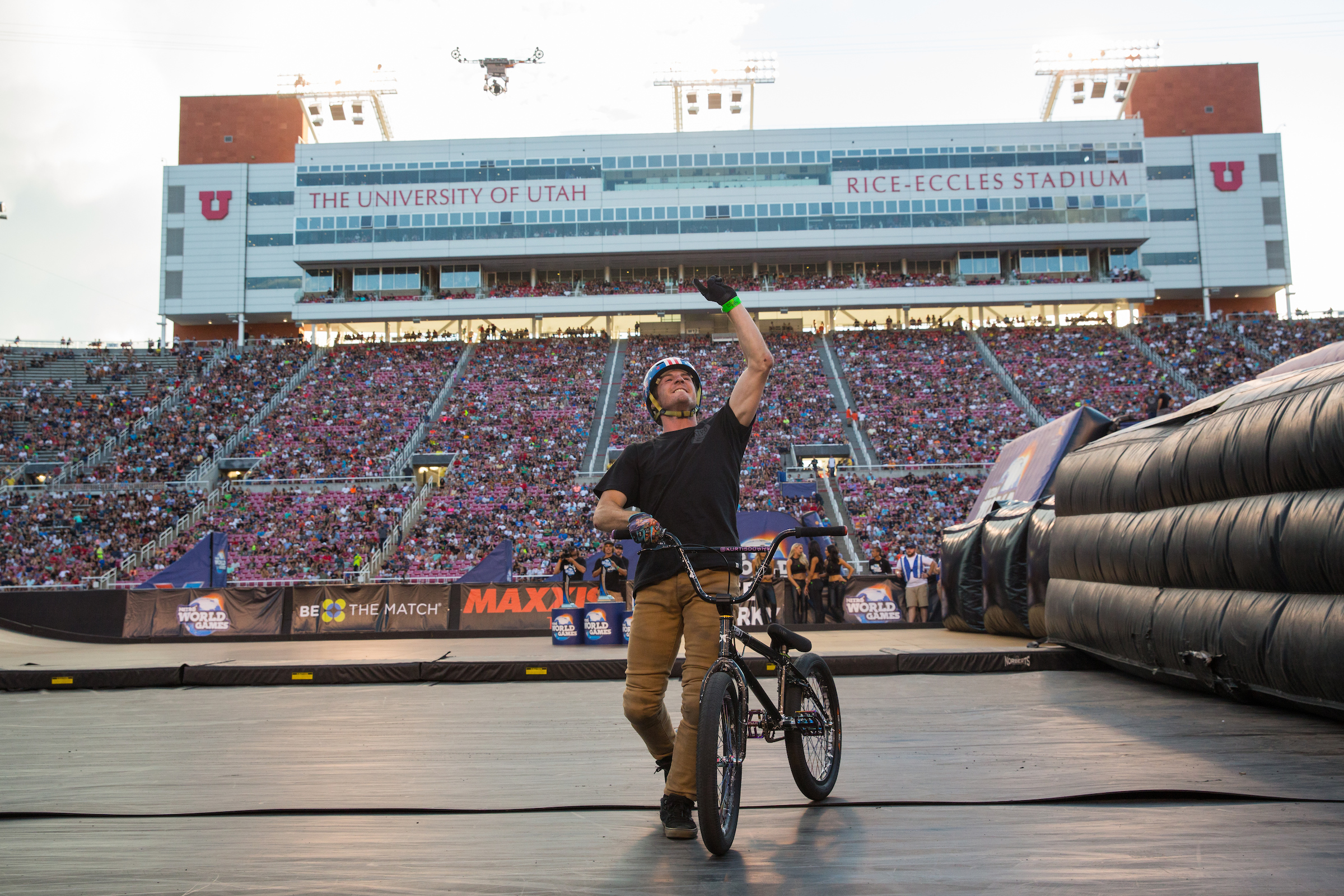 What is there to say that hasn’t already been said about someone as talented and inspiring as Travis Pastrana? As if the 11 X-Games gold medals in several different sports aren’t enough, Pastrana has also created his own legacy with another household name: Nitro Circus. From their start on television to the live performance now, Pastrana and Nitro are still pushing the action sports community every single day. Pastrana and his fellow henchmen of daredevils, made up with the likes of Gregg Godfrey, Jeremy Rawle, Jeff Tremaine and a collective of the best big-air athletes in the world have been touring with Nitro Circus for roughly six years now, hitting stops all over the world. Travis’ newest and now most involved event is called the Nitro Circus World Games, which had its debut right here in SLC at the Rice-Eccles Stadium this past summer. An event that Pastrana refers to as the “Big Air Olympics,” Nitro Circus comprised some of the world’s best athletes launching themselves into the air to perform mind-boggling tricks. SLUG had a chance to get on the horn with Pastrana while he made a stop in the beautiful City of Salt and discuss the present and future of what is to come from him and the circus he calls life.

SLUG: What brings you to Salt Lake City on this trip?
Travis Pastrana: The main thing was to finalize all the details and everything for Nitro Circus World Games, coming back here to Rice-Eccles Stadium next summer. We are pretty much all set, so I am super excited to bring the event back here!

SLUG: That’s awesome! Let’s backtrack to Nitro Circus 2016. What were some thoughts going through your head that day?
Pastrana: Well, ever since Josh Sheehan did a triple backflip on an FMX bike in my backyard and then later a double backflip in competition that year, we knew we had to do something with big-air athletes competing and pushing the limits in their very own event. It all came together pretty quickly, and not to mention, some of these ramps were the biggest ramps these athletes had ever hit. All in all, at the end of the day, there had been 40 tricks that had never been done before, and not one single broken bone in a matter of three hours—so yeah, it was a big day for us!

SLUG: Josh Sheehan is an athlete who is pushing the limits, as well as Jed Mildon, who threw a quadruple backflip on a BMX bike. Who are some other athletes that come to mind when you think of guys who are pushing the limits of their sport?
Pastrana: R Willy (Ryan Williams) has to be at the top of that list. His background is in scootering, but he is now stepping up to BMX riding, with tricks like 720 and 1080 front flips, which have never been done by anyone else. The guys that come from snowboarding are also pushing and progressing their sports as much as possible.

SLUG: Has there ever been any talk of a winter-sport Nitro event?
Pastrana: For me personally, the passion has always been fueled by the summer and warm-weather sports. We have kicked around the idea of doing something for the winter months, but in my opinion, those outlets are already out there. Things like the Winter Olympics and Winter X-Games are still prevalent and still pushing the sport but nothing on that scale really exists for summer sports, and definitely not for big-air competitions. That’s where I think Nitro World Games comes in and fills that void.

SLUG: You’re a family man now, Travis, with two kids, and your wife, Lyndsey “Lyn-Z” Adams Hawkins, is also a professional athlete. How has that influenced you through all of your different career moves throughout the years?
Pastrana: People always ask me how can I travel around the world with my kids and wife, and honestly, I can’t imagine travelling the world without my wife and kids. Nitro Circus is made up of the most passionate people in the world—and some of the best people in the world—[so] having my family around just makes sense. If my daughter wakes me up at 5 a.m., I can grab her and then go down to a hotel lobby, where there will be all of my friends and the extended part of what I consider my family. Lyn-Z is always there for me and pushing me harder. SLUG: How has it been, working with the Godfreys and seeing the Godfrey Clan excel in all of these Nitro Circus events?
Pastrana: Those guys are the coolest and some of the most talented guys to see doing the things they do. I watched Gavin Godfrey become the first person in the world to do a triple backflip on a mountain bike, and then five minutes later, his cousin Ethan Roberts did it, too. The first and second triple backflips were done the same day by two cousins who built the jump and landed the jump together, so that was really cool to see. It was also amazing to see Gavin qualify and get second in the Nitro Circus World Games in BMX [as] someone who mostly flies around on contraptions and mountain bikes. It just goes to show how talented these guys are.

SLUG: What is the big picture for you and for the future of Nitro Circus World Games?
Pastrana: I want to provide the biggest event for the disciplines of big air sports. I think that when there is a need for something, then that is where I excel. There are a lot of really smart people working towards the future of Nitro and the future of where we can take these sports. I myself have been really interested in the safety of these sports and the ramp-building processes to help make these tricks possible. My backyard has become a bit of a training facility, and we really use everything we can to help the world’s best athletes accomplish the best tricks as safely as humanly possible. It is not safe to go 60 to 70 feet in the air, flipping a motorcycle, but there are better ways to do that then others. My focus right now is this next Nitro Circus World Games right here at the Rice-Eccles Stadium!

SLUG: Travis you’ve been an inspiration to so many people, pro and non-pro athletes alike. What are some mottos or words that you live by?
Pastrana: I feel like I may over-state this, but I also feel like I can’t overstate this enough: If you really love something and you really care about and have passion for something, you will find a way to make a living out of it. It may not be the rich and famous living that you dream of, but if you have enough passion … just go out and do it. You will find a way to make that your life and to keep that passion alive in your life!

When you speak to him, Pastrana’s energy and pure desire shine immediately. His creativity and limitless attitude toward not only his own sport, but also the action sports world in general, is something that is not easy to come by. When it comes to passion and the height to which one can take their dreams, studying from Travis Pastrana’s past can put a whole new spin on one’s outlook.

The Nitro Circus World Games will return to Salt Lake City’s Rice-Eccles Stadium this summer on June 24, 2017. Tickets are now on sale. Stay up to date with all things Nitro World Games and purchase tickets at nitroworldgames.com.