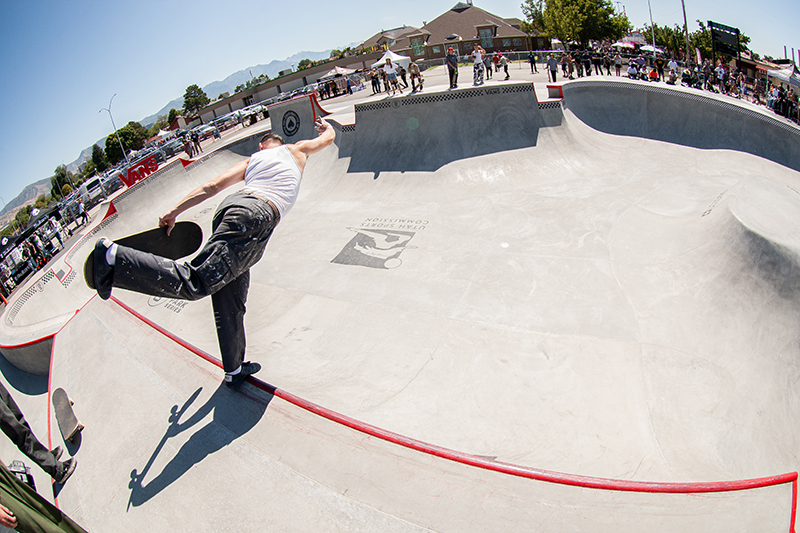 Milosport x Vans: You Can Skate the SL.AM Competition

Have you ever kneeled at the edge of your bed and prayed to the skate gods to build a big transition skatepark in Salt Lake City? Well, folks, the eagle has landed. That’s right, Milosport and Vans have teamed up to build the skatepark of your dreams on the Utah State Fairgrounds and will be hosting the Salt Lake Amateur Competition. Milosport General Manager Jack Stevens dishes on all the details of the upcoming SL.AM competition and how it came to be.

Salt Lake has always had an amazing skateboarding community. That’s why Milosport jumped on curating the idea of the SL.AM competition when they heard that the Vans Park Series park was going to be permanent. Stevens says, “It opened up an opportunity and a venue to showcase the local talent that is in Salt Lake.” After Milo reached out to their local contact at Vans and knew they were all about it, they got to work. Vans has been a huge part of retail at Milosport and for a long time. Vans is always do a great job of giving back to various skateboarding communities around the globe and having longtime ties with Milosport. Stevens says, “It made sense that they were the headline sponsor.”

“[The Vans skate park] opened up an opportunity and a venue to showcase the local talent that is in Salt Lake.”

SL.AM is welcome to anybody and everybody. Even if you don’t live in Utah, Come on over and show us what you got. If you live in a different country, buy that plane ticket and come skate your heart out! But I digress. This competition is open all ages, men and women, and one open class. “If you can skate big bowl, come on out,” Stevens says. It’s going to be popping off during the Utah State Fair. Sept. 13 is qualifying day and Sept. 14 is the finals. If you want to compete in this competition, registration takes place Sept. 13 at 10 a.m. Did I mention that this competition is free? That’s right: If you think you’ve got what it takes to play with the big dogs, make sure you’re there to register in time because the competition starts at noon both days. Although the park is still being constructed, Stevens says, “The park is no joke. It is going to be big transition built for the Vans pros and the Park Series World Championships.”

Despite this competition being free, the prizes for the winners are all-time. Other rad skate competitions that take place in Salt Lake do get you swagged out by local companies/skate shops or you’re given a smaller cash prize. This larger-scale comp is giving skaters the opportunity to make some real-deal skrilla. The prizes that are being awarded to folks who take on the podium are: 1st Place is given a whopping $1,000, 2nd Place is given $500 and 3rd Place is awarded $250. For you all-stars aiming to get that best trick award, the winner will be given a Traeger grill and a cash prize of $100—Now don’t go spending all that on some fancy record player. Cash prizes and awards aside, this competition is being held not only to give our local skateboarding scene the opportunity to prove itself; it’s being held so that friends from all over can come out to skate with their homies, jam to good tunes and enjoy the core values of why skateboarding is so important to us. One of these values is to simply just have fun.

“The park is no joke. It is going to be big transition built for the Vans pros and the Park Series World Championships.”

The teams at Milosport and Vans have been working their buns off making all of our wildest dreams come true and are the ones to whom we need to tip our hats. The SL.AM competition wouldn’t be possible if it weren’t for them grinding day in and day out. Let’s not forget the love and support that they received from the Fairgrounds in letting them build this pro park here in our city. This is what makes Salt Lake so special. Although Salt Lake has a “smaller skateboarding scene,” so to speak, this competition is going to set the bar for our communities next great endeavor into skateboarding. Stevens says it right that the community “deserves an opportunity to prove itself.” There are no official sponsors just yet, but “since it is an amateur contest, the brands always pay attention to the competitors and keep the winners in mind for future sponsorship opportunities,” Stevens says.

Well, here’s your chance Salt Lake—if you can skate big bowl and big transition, get on down to the Fairgrounds Sept. 13 to register and be prepared to lay it down for all us spectators. To all the folks in the stands: Be sure to bring the whole family, put on your favorite pair of shoes (don’t forget to grab a corndog or some snacks while passing the fair vendors) and get ready to watch what might be considered the greatest skateboarding event of the year.

Jed Fuller: A Will and A Way
Milosport: Interview with Benjamin Pellegrino