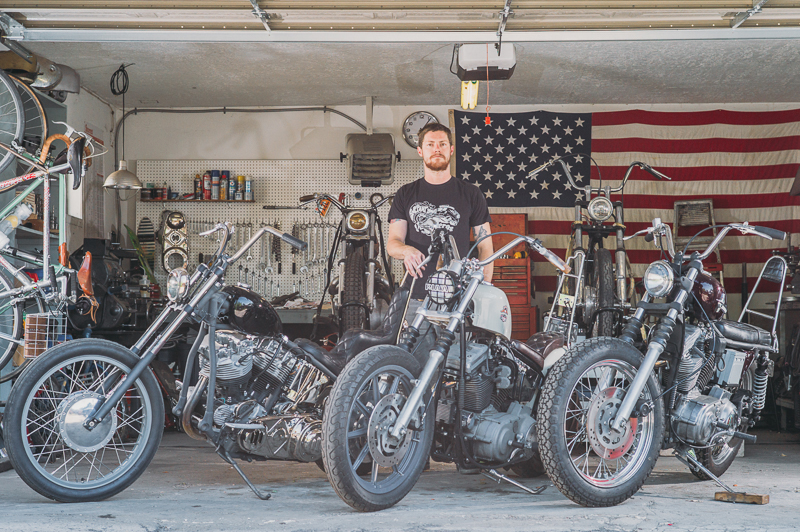 The fastest route between two points is a straight line, but don’t bother telling that to local custom motorcycle builder Greg Hebard of Regatta Garage. After speaking to him for only a few minutes, I got the sense that Hebard isn’t interested in doing anything the easiest way possible—especially creating his one-off, two-wheeled rolling sculptures. He approaches building motorcycles with the intent of creating something truly unique. “You can buy a Sportster, and you can build it and it’ll be custom, but someone else can build it exactly the same,” says Hebard. “I’m trying to go away from that. I tried to make my own hardware on the bike because I wanted to do it, so from the foundation, it’s completely different.”

Regatta Garage, along with local builders Pangea Speed, Salt City Builds, Bang Moto and others, will be displaying custom bike builds at the upcoming Craft Lake City DIY Festival on Sunday, Aug. 14, as a special preview in conjunction with the motorcycle and art show Salty Bike Revival (SBR). Their first year of SBR was a huge success, which lead to this year’s DIY Fest special preview, where some of the bikes that will be shown at SBR will be shown alongside all of the other great local artisans and artists who will display their wares at the DIY Fest. Regatta Garage will be showing a couple of customized Harley-Davidson motorcycles.

Hebard builds hot rods and has a degree in fine art and a background in photography. He has an interest in CAD design and loves a variety of handmade wares, including jewelry or furniture, like those made by Project Sunday. With this in mind, showing custom motorcycles at a makers festival seems obvious, though it is far from common. When asked about what he thinks about showing a bike alongside the things people traditionally associate with the DIY Fest such as jewelry, drawings or blown glass, Hebard says, “I think it’s awesome. I like the idea of looking at a bike as art. A lot of the best bike builders I can think of are artists first and bike builders second. There are blown-glass pieces on my bike. If I could have that thing in an art gallery, I’d be pumped.”

Looking at Hebard’s builds, one can see the amount of attention to detail he puts into every bike. Because he takes on only a few projects a year, he puts an immense amount of time into every build. He recently showed his work at Born-Free Motorcycle Show. “My girlfriend, Ady [Meyer]—she doesn’t really like the couple months before Born-Free, because every night, I’m in the garage until 3 a.m.,” says Hebard.

Utah has many talented bike builders, and the number has increased each year. Hebard acknowledges this and is glad to see it. “When I’m driving around town, I constantly see awesome custom bikes now,” says Hebard. “A couple years ago, most people were riding stock Harleys. Now, I feel like I see really cool choppers all the time, and it’s cool because I don’t know who they are. We live in such a small city—to not know who it is, I think that’s pretty awesome.”

Hebard takes customizing seriously, not content with bolt-on parts that can be bought off the shelf or from an online catalog. For one of his latest builds’ foot pegs, he designed them first in CAD, 3D-printed them and then had them cast in aluminum, resulting in a completely one-off look. In his garage are bags of beer cans that he is saving to melt down in order to create parts for a future build.

In addition to creating complete builds, he also manufactures individual parts that are sold on lowbrowcustoms.com. “I have my own handlebar bender, so I can do these really tight bend radiuses like they did in the ’60s,” says Hebard. “I’ve built a lot of bars for kids around town, and it’s always cool because I feel like most people can tell when they’re my handlebars.” Anyone interested in commissioning a build or parts can contact Hebard through his website, regattagarage.com. His bikes will be on display at the upcoming DIY Festival this August and Salty Bike Revival, which happens Sept. 9–10.