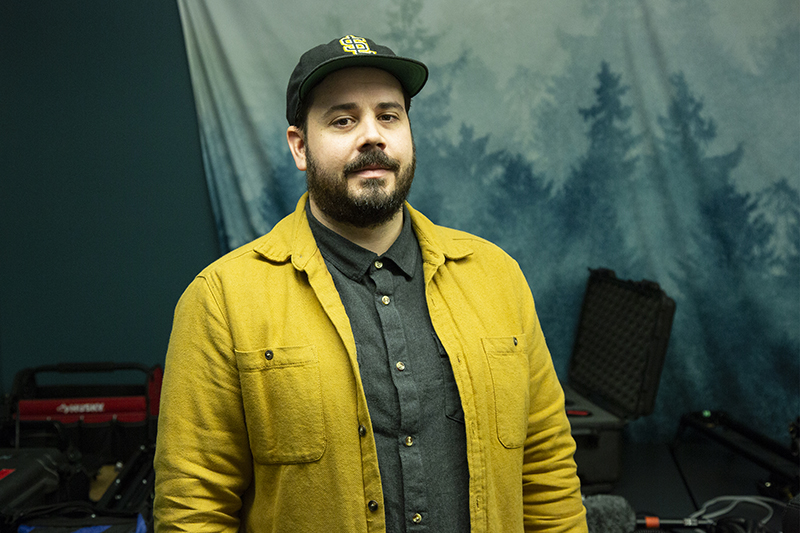 The night before Thanksgiving, while the streets of downtown Salt Lake City were empty, the Utah Film Center’s Artist Foundry was buzzing with energy—members of the Artist Foundry were still working on their films, some using the state-of-the-art editing bays while others discussed ideas at sleek, industrial-chic couches and tables. There’s a communal sense of work that goes into a film, whether it’s a short or feature, and the Artist Foundry is an eclectic mix of all the people who can help make that happen, from actors and writers to video editors and cinematographers. It’s evident that Dallin Cerva, founder and manager of the Artist Foundry, has a sense of direction for the work he’s doing—fostering a community of talented Utah filmmakers and creating a space where their artistry can be realized.

Dallin, along with wife Jacquelyn Cerva, started the Avrec Art House in 2015 with the intent to create a shared space for filmmakers that would provide relatively low-cost, high-quality resources to improve upon their craft and give them an opportunity to network with other people in the field. Dallin’s motivation to start Avrec Art House stemmed from his choice to stay in Salt Lake City and try to build up the local filmmaking community, rather than move to a larger city. “The idea was to attract local talent and build a community of filmmakers who are like-minded and wanted to create unique projects,” says Dallin. “Filmmaking is an expensive art form, so this provides a low-cost resource for people who are attempting to do something out of the norm.” Many members and residents of Artist Foundry end up collaborating on films based on their needs or specific skills. “People can come in, meet other people and crew up—I see that a lot,” says Dallin. “A lot of my members end up getting work from each other. That helps build the little mini-industry that we have.”

AUtah Film Center recently acquired Avrec Art House, which then rebranded as the Artist Foundry in 2018. “We have had a good relationship with the Utah Film Center ever since we began,” says Dallin. For the Utah Film Center, there was a need to expand their artist support program, while Dallin, who funded a lot of Avrec Art House with his own funds, welcomed the acquisition. “It was a really good opportunity for us to continue with the momentum we already built and continue providing a resource for the people who had already found a home here,” he says. For the future, Dallin wants to build on the success of the workshops he offers, as well as work more with the Utah Film Center to showcase Artist Foundry member films to a wider audience.

Local film production group Nighttimer Productions were some of the first to take advantage of what Artist Foundry has to offer. For Nighttimers Rylee Syme and Zach Johnson, Artist Foundry was a way to hone in on their filmmaking hobby that they had been working on since high school.” Although, they were both initially attracted to the workshops and opportunities to learn more about their craft. “One of my first experiences [at Artist Foundry] was the writer’s workshop,” says Johnson. “I [previously] paid for screenwriting classes at SLCC and didn’t feel like I got anything out of them. I felt like, ‘Wow this workshop is incredible—I’m learning so much. People are actually talking about the things I want to talk about.’” Members of Artist Foundry have special access to workshops that involve current industry workers rather than from a perspective of being far removed from it. For Syme, being able to dive into the community of people who were already actively making films was part of what sold Nighttimer Productions on their membership to the Artist Foundry. “The reason we started out as a group was that we wanted to learn how to make movies,” she says. “Having something where people who are [making films] right now is something way more tailored to making films in the moment.”

Nighttimer Productions have a cache of quirky, dreamlike short films on their website and YouTube channel, as well as two music videos for local pop-rock band Ugly Boys. For Syme, taking the leap from the group getting involved with Artist Foundry to actively putting their knowledge to use is something they may not have been able to without the resources provided. “As a whole, I think what [Artist Foundry] has done has made us better filmmakers and efficient filmmakers. For us, the goal has always been to be filmmakers,” says Syme. “We have day jobs, and we do this at night, hence the name. Yeah it’s a hobby, but hopefully, one day, it’s not a hobby.” Despite having to work around day jobs, Nighttimer Productions have had one of their most productive years yet, having seen five short films to completion in 2018 through Artist Foundry. This raises the bar for Nighttimer Productions in 2019. “I’m really proud of this year. This is the point where we can do bigger, more challenging projects,” says Syme.  “We’re getting our groove on, we understand what our strengths are, how to operate, and how we want to run our sets.”

The opportunity to learn and evolve as filmmakers appealed equally to Alexander Woods and Shawn Francis Saunders of Kimble Production Company. Woods and Saunders finished their short film, Say the Sins, through Artist Foundry, a screenplay they cowrote together based on a play that Saunders created for the Sackerson Theater Company. The film opens with the daunting images of a young priest moving through an empty, grandiose cathedral on his way to his first confession, which doesn’t quite go as planned. Woods was inspired by the interactive nature of Saunders’ play, which required members of the audience to be in the priest’s position and hear another person’s strange confession. For Woods and Saunders, who originally met both as actors studying at UVU, coming to Artist Foundry has helped solidify their ideas in Say the Sins, as well as opened them up to other aspects of the industry. “[Dallin] pointed me to a really good cinematographer and a gaffer, and just connected me to people who could do technical things that I had no clue how to do. I didn’t go to school for filmmaking, so that was really helpful,” says Woods. “Now I do a lot of freelance video editing, and I try to do everything I can to be working in the film world. I can act, but I like talking to actors and creating a scene more. [Making] Say the Sins really clicked for me; I feel most energized and most comfortable writing and directing.”

For Saunders and Woods, Say the Sins was a good jumping-off point for where they wanted to take their films. Say the Sins had a run at a few festivals. In one such festival, Say the Sins played to an audience of one, a person who later bought them pizza (success!). However, at the Footcandle Film Festival in Hickory, North Carolina, Say the Sins had a much broader reception, as Woods says that the screening gave his film exposure to a whole new audience. “It was a full theater, and everyone responded really well to it,” he says. “They were wanting me to submit again.” Currently, Saunders and Woods are waiting to hear back from festivals on their newest film, The Wreath, which Saunders says will be a departure from Say the Sins. Saunders says, “We wrote and directed [The Wreath] together, and it’s a very visual, surreal story, as opposed to a dialogue-driven story, which Say the Sins was. I like to say it’s about a guy who really wants a candy bar,” Saunders says.

Despite their separate projects, Nighttimer Productions have worked together with Saunders and Woods through Artist Foundry, something that Dallin credits to the networking that often happens between his members—“hands down, the most valuable resource we offer is the community,” he says. With The Wreath having debuted at the end of 2018, Nighttimer Productions are also finishing up a short film called Senses. “Senses is an LGBTQ story about someone dealing with intimacy issues and talking about it with body horror that I wrote and directed,” says Johnson, who cast Woods to act in the leading role of the film. Connecting talented individuals who can help others’ projects is something Dallin personally invests a lot of his time at Artist Foundry doing, as well as giving advice and direction to members who are working on their films. For the Nighttimer Productions, as well as Saunders and Woods, having the expertise of Dallin and other people working in the Utah film community is an invaluable resource. Woods says, “Ever since [Johnson] and the Nighttimers invited me to audition and I got the part, I got to know these guys a lot better. We want to work with them more in the future. It’s been kind of cool to see this place kind of melt together.”