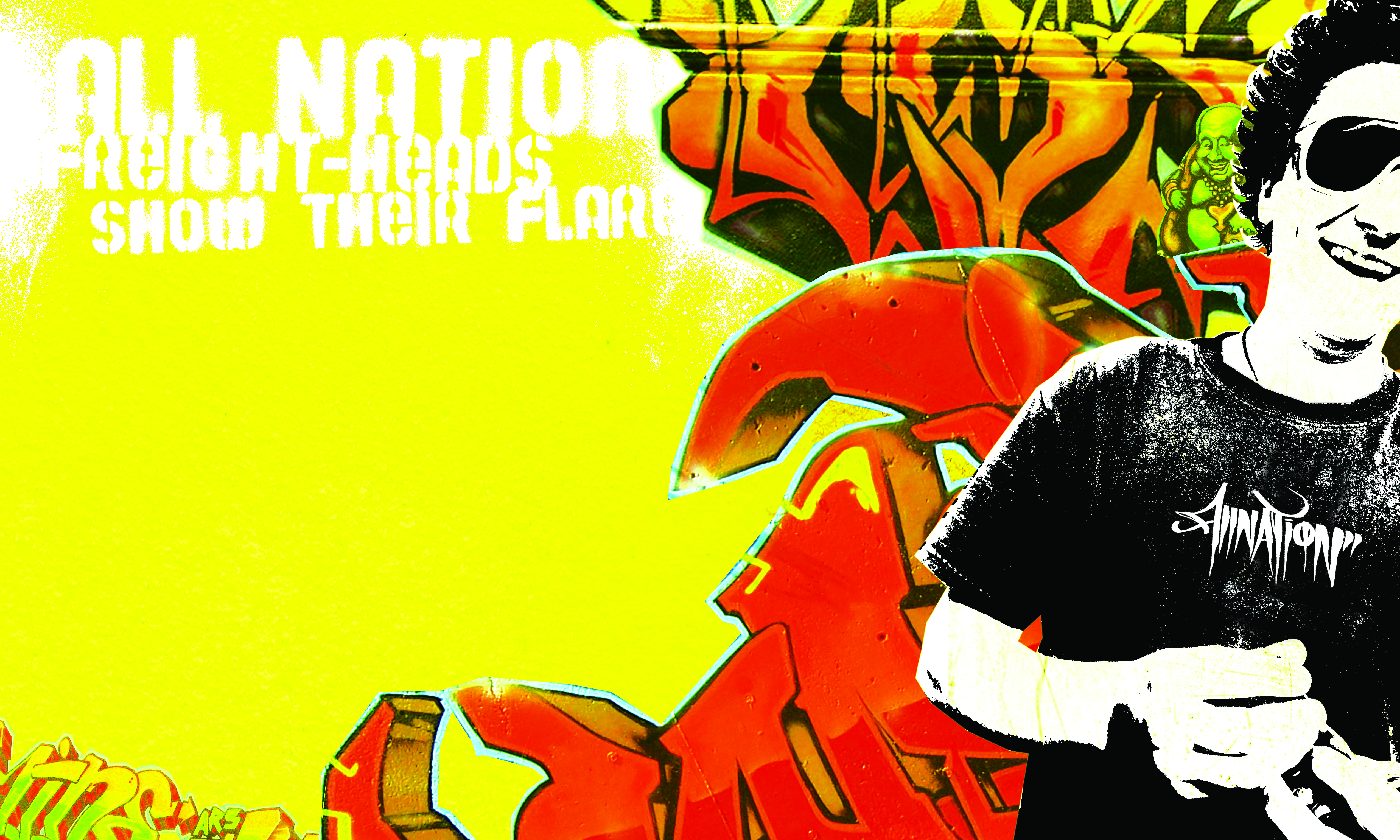 All Nation Freight-Heads Show Their Flare

Post-graf, street art, urban art—call it what you like, but Graffiti, in its raw essence, is about leaving your mark. It’s personal evidence of ones existence left to taunt (or humor) the public while sending a big ‘Fuck You’ to the powers that deem this work vandalism.

“I think artwork ought to challenge people. If you’re not challenging somebody with what you’re doing then your not doing your job.” Joe Evans owner of Nobrow Coffee & Tea said of the graffiti show that will be displayed at his coffee shop gallery this month.

All Nation published its first issue in 2004 shortly after the publisher picked up a graffiti magazine at a Tower Records in England. He’d been documenting freight graffiti for years, and finally realized that he could turn his hobby into a business. He secured a personal loan and everything was running smoothly until his distributor, Desert Moon Periodicals went bankrupt. Today he is still owed over $18,000 dollars in unpaid subscription sales. “That took all of the money that All Nations had. All I had left was enough to pay back the loan or make another magazine,” he says. He paid back the loan, and took out a new loan to create the third issue. “By the time issue three came around I had no money. I would have had about 10,000 dollars profit from the first two issues, and instead I had to start from ground zero.”

Today the magazine has published five issues, the sixth being due out in late April 2007. He distributes 10,000 issues around the globe including places as far away as Europe and South America. The magazine’s overhead is covered through subscription and ad sales.

Since the early 80s graf zines like Clout, Life Sucks Die, Mass Appeal, Day in the Lyfe, Bigtime, Scribble, were created to document graffiti art. Many of these zines focus primarly on wall coverage, but Salt Lake City based, All Nation takes a slightly different path with its exclusive coverage of American freight train graffiti; haling itself as the only magazine dedicated to this niche.

“I come from a freight environment,” the publisher says when asked why the majority of All Nation is dedicated to trains. “In San Francisco the walls get bombed, but in Salt Lake…we are in the Golden Spike empire” he finishes. The publisher is referring to the symbolic golden spikes that joined the Union Pacific and Central Pacific railroads in 1869. This made Utah a freight train hub, with trains rolling through the Wasatch Front every hour and presenting local graffiti artists with many canvases to fill.

Another trait unique to All Nations is their conscious effort to avoid associations with hip-hop culture. “Almost every graffiti writer that I’ve met has a background in skateboarding, punk rock or hardcore. I’m trying to pay more attention to that than other graf mags have in the past” the publisher continues, “I’m starting to explore deals with skateboard companies. I’m trying to get ads from skate, snow and music rather then just the hip-hop world.”

The manner in which All Nation deals with music coverage is just as distinct. Instead of CD reviews or band interviews, All Nation takes a subtle approach and prints playlists of what artists were listening to while working on a piece. Ninety percent of the content is strictly photographic images of painted freight trains mixed with a few walls and bombing scrawls. And you’ll never find a fashion article within the pages of All Nation. “My success comes from keeping the core content [actual graffiti] and an unbiased view,” the publisher says. “To get into some magazines you have to be a certain somebody from a certain crowd.” Magazines like All Nation are important to many graffiti writers because as their art appears and disappears (sometimes within a matter of hours) the photos in the mags are the only evidence that it ever existed.

Although the publisher of All Nation is more interested in illegal street graffiti than gallery graffiti, he will curate an art show titled, American Rockstars, at Nobrow Coffee & Tea on Friday March 16 as part of Salt Lake’s Gallery Stroll. The show will feature a combination of tangible works of art, non-graffiti pieces and more authentic street graffiti pieces. The concept of an on-site production was tossed around, but it is unlikely that it will happen due to the danger of a graffiti artist’s face being associated with their work.

“I’ve been really interested in the idea of legitimizing graffiti as art, which could almost destroy what graffiti is. It’s become somewhat mainstream anyway, but a lot of people still don’t get any of the exposure.” Joe Evans owner of Nobrow Coffee & Tea said.

American Rockstars opens Fri. March 16, 6-9p.m. at Nobrow Coffee & Tea located on 315 East 300 South and will hang until Wed. April 19. The exhibition spotlights graf writers from all over the world including Fatso from Canada, King 157 from NYC and Lost from San Francisco. Local artists like Erupts, Vine, Spade and Stem and many others will also be represented.