The Leonardo’s newest exhibit, Animal Inside Out, is a menagerie of creatures preserved through the art of plastination, where the fat and water in a body is replaced by plastic. The result is startlingly, beautiful and eerie.

Animal Inside Out: A Body Worlds Exhibit 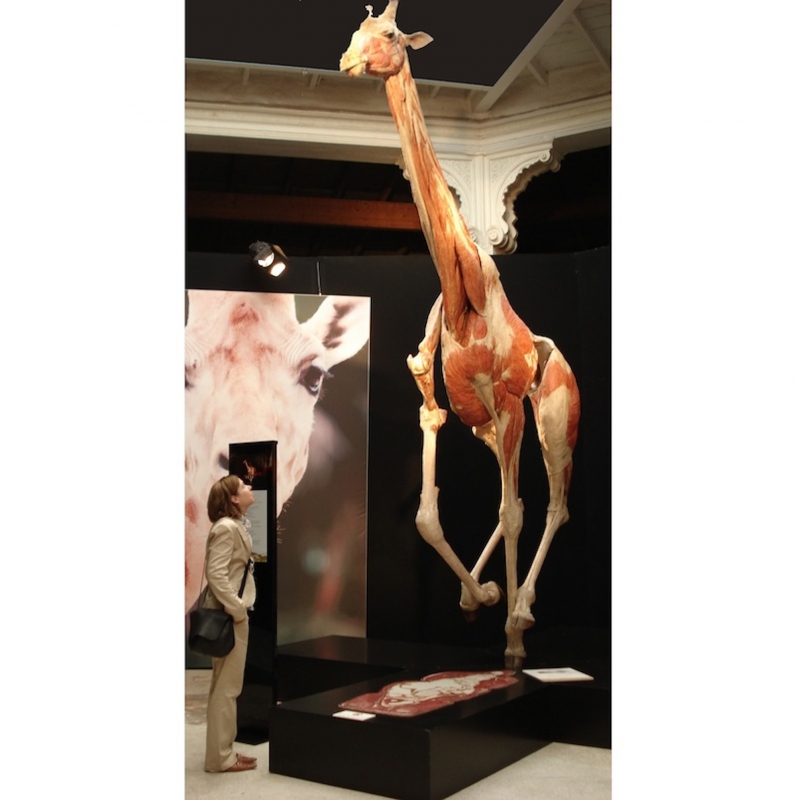 Plastinate of a Giraffe. © ANIMAL INSIDE OUT, a Body Worlds Production, www.animalinsideout.com

The Leonardo’s newest exhibit, Animal Inside Out, is a menagerie of creatures preserved through the art of plastination, where the fat and water in a body is replaced by plastic. The result is startlingly, beautiful and eerie.

I have to admit, I was taken aback while I wandered through the exhibit. To say it was macabre is an understatement. It’s more like stepping inside a Nine Inch Nails video. This is taxidermy on steroids. Some animals were preserved with half their skin or fur, making them appear almost demonic. Others scared me because of their size. You think you know how humongous a giraffe is until you stand under one. Those things are huge, ranging from 14-19 feet.

Seeing animals this close up, and in various stages of, um, undress was far more scientifically valuable than gawking at depressed animals in zoos and aquariums. While I was trying to appreciate a horse’s head sliced in thirds, a family of cute little kids were cheerfully posing for pictures with the plasticized animals. They were totally unfazed that the animals were dead and kinda creepy. Kids these days! Hopefully, they left the museum with a deeper connection and understanding of animals. They certainly won’t see anything like this in a text book.

Whether you’re enthralled or creeped out, Animal Inside Out will certainly leave an impression. It’s another breathtaking exhibit by Dr. Gunther von Hagens, the German anatomist who invented the process of plastination. If you’ll remember a few years back, The Leonardo presented Salt Lake City with the groundbreaking exhibit, Dr. Gunther von Hagens’ Body Worlds, {http://www.bodyworlds.com/en.html} featuring preserved human bodies and body parts. It was a perfect nod to their namesake, Leonardo da Vinci. A sculptor, painter and scientist, Da Vinci was enthralled with anatomy. He once said, “The human foot is a masterpiece of engineering and a work of art.” Imagine what he would think of the squids and octopi on display!

Each animal comes to life in a bright spotlight against a black background. Muscles, ligaments, tendons and nervous systems are exposed. An average of two years were spent painstakingly preserving each animal. (The giraffe took three.) Over 100 specimens are included in the exhibit. The animals are graceful, frozen mid-movement. The artistic skill of the scientists is remarkable—They’ve captured the personality of each animal. The dog, composed of only blood vessels, is ready to play fetch. The squid swims, and the docile lamb nearly broke my heart. It’s artwork worthy of Da Vinci himself.

It’s important to note that none of the animals were harmed; all died of natural causes. The specimens were donated through cooperation with zoos and university veterinary programs.

“The authenticity of all Body Worlds exhibits gives them the unparalleled ability to both teach and inspire the deepest respect for all living creatures,” said The Leonardo’s Executive Director Alexandra Hess.

Animal Inside Out will leave you with a better understanding of the similarities between humans and animals. We are all made of nerves and muscles covered in skin. We eat, mate, reproduce and die. “It is critical that we increase our understanding of animals in the wild,” said Dr. von Hagens, “not only for their preservation, but also our own.”

Everyone from pigeons to fish to goats were included in this display. With over 100 specimens, it’s easy to get overwhelmed, but take your time—it’s unlikely you’ll ever see anything like this again.

Throughout the summer, The Leonardo is partnering with local animal welfare groups, Hawkwatch and others to sponsor pet adoptions, films, hands-on workshops and other family events. Visit The Leonardo for a memorable date night or bring the whole family. There’s a lot to do here, including grabbing a delectable bite to eat and glass of wine at The Salt Bistro and shopping around in their fun gift shop. The museum has become a must-see destination in downtown Salt Lake City, offering both science and culture. It’s easy to lose yourself here for a day.

Animal Inside Out will be followed by Body Worlds & The Cycle of Life in the Fall of 2014, the first time a museum has hosted back to back exhibits! “No museum has ever had the chance to bring two back to back Body Worlds exhibitions to a single market. We’re thrilled to be able to offer the people of Utah and the region this first of a kind opportunity,” says Hess.

Combo tickets are available for both exhibitions at a discounted rate. Don’t miss out.

Tickets for this exhibit are $19 for adults and $15 for children, and can be purchased online here.