SLUG Mag Soundwaves
Episode #395 – Cotes
00:00 / 18:06
Spotify Stitcher
RSS Feed
Share
Link
Embed
Let’s face it: Salt Lake City’s local food scene commonly gets ignored. Among the clutter of chains and fast food joints, it’s easy to forget the marvelous local food available here in the valley. For a few years now, Becky and Josh Rosenthal, the creators behind SLC Foodie and Vintage Mixer, have been working hard to make sure we never forget that fact again. Their local food events, SLC Mixers, are bringing people and food together like never before. 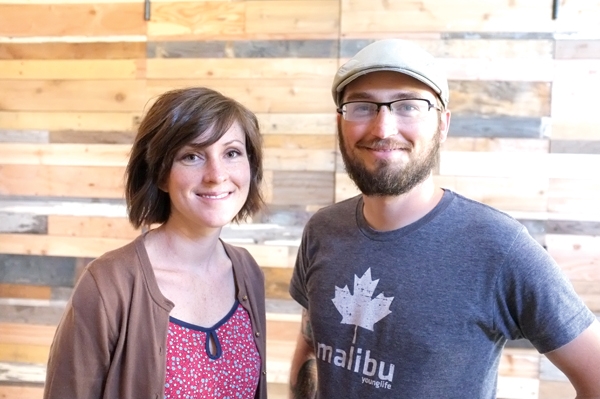 Let’s face it: Salt Lake City’s local food scene commonly gets ignored. Among the clutter of chains and fast food joints, it’s easy to forget the marvelous local food available here in the valley. For a few years now, Becky and Josh Rosenthal, the creators behind SLC Foodie (theSLCfoodie.com) and Vintage Mixer (thevintagemixer.com), have been working hard to make sure we never forget that fact again. Their local food events, SLC Mixers, are bringing people and food together like never before.

The Rosenthals started simple with Vintage Mixer, which features seasonal recipes, utilizing ingredients one can find at a local farmers market and explaining how to cook them. “Right now, there’s lots of things with fall ingredients … you can get at the Farmers Market: butternut squash, pumpkin desserts, acorn squash, soups and stews, and all the fall recipes everyone enjoys and looks forward to,” says Becky. As the local food scene has grown, so has the need for a voice to advocate it, and SLC Foodie emerged, branching out of Vintage Mixer. SLC Foodie maintains its focus on local restaurants, local food sources and the local people behind the scenes. “It could be anyone from our friend Evan [Lewandowski], who’s a winemaker [with Ruth Lewandowski Wines] that’s just starting to make wine in Utah, to a restaurant like Finca, that’s pretty new, and highlighting some of their dishes. It’s not necessarily a food critic site, ’cause I’m not necessarily a critic—it’s more that I want to be an advocate for the city, an advocate for local products and local people through the food scene,” says Becky.

Toward the end of last year, Becky and Josh decided to boost their direct involvement in SLC’s food scene by hosting an event, and SLC Mixers were born. “We did a wine thing with Evan, and we were just kicking the idea around. Into the spring of this year, we were doing them sporadically, but they were all selling out, and we thought, ‘Maybe we actually have something here.’ So, we went into the fall with a huge calendar … just to see if people would come out for them,” Josh says.

Each event is hosted at a different local restaurant, or a local business that deals with food, and each has its own theme. This creates a unique atmosphere for each Mixer. “Our heart and desire for the events is not only to help be an advocate for the local food, but also to gather people and bring the new online community offline, and have them actually sit across from each other at the table and get to know each other and have a conversation,” says Becky. “I feel like the dinner table is this common denominator, a great equalizer, and we can connect to all kinds of people from different backgrounds.”

Another goal behind the Mixers is to bridge the gap between the cook and the consumer. “A really important part of our events is storytelling, because we’re providing an outlet for the person behind the food to tell their story. And some of these stories are really beautiful,” says Becky. One recent SLC Mixer at Caputo’s allowed the owners to tell the story of their shop through food. Another featured Indian food from The Tiffin Bus paired with beers from Epic Brewing Company. Jim Santangelo of the Wine Academy of Utah led a class in selecting red wines to pair with salmon farmed from local seafood wholesaler Fog River, whose owners were also present at another recent Mixer. “We really put a heavy emphasis on relationships. I think one of the cool things about Utah is that … Salt Lake is in a position where, if you want to know the people who are making your beer or making your food, they’re also excited to ,” says Josh.
All of the Mixers for November feature a Thanksgiving theme. The first, on Nov. 3, focuses on Thanksgiving desserts with Hilary Cavanaugh from Rue de Lis. On Nov. 10, the Mixer will revolve around High West, Creminelli, La Barba, Uinta Brewing and Beehive Cheese. The next event, on Nov. 11, will look into Thanksgiving sides with Victoria Topham from Piñon. The last November Mixer, on Nov. 17, will go over Thanksgiving entertaining and cocktails. There are also two SLC Mixers in December. The first will be on Dec. 1, and will feature Christmas cookies with Maria Lichty from Two Peas & Their Pod. The last, called “Taste of Burgundy,” will take place Dec. 9 and include Jim Santangelo, who will teach atendees about wine on behalf of the Wine Academy of Utah.

Pricing for each Mixer ranges from $25 to $45. For tickets or specific information about each mixer, go to slcmixers.bigcartel.com or email [email protected] Whether you’re interested in making the perfect cocktail, putting together a fabulous Thanksgiving dessert or mixing up a batch of Christmas cookies, Becky and Josh have prepared just the right event for you. Josh says, “By and large, it’s all about [shops that are] locally owned by someone who lives in the community trying to do something special for people who live in Salt Lake.”