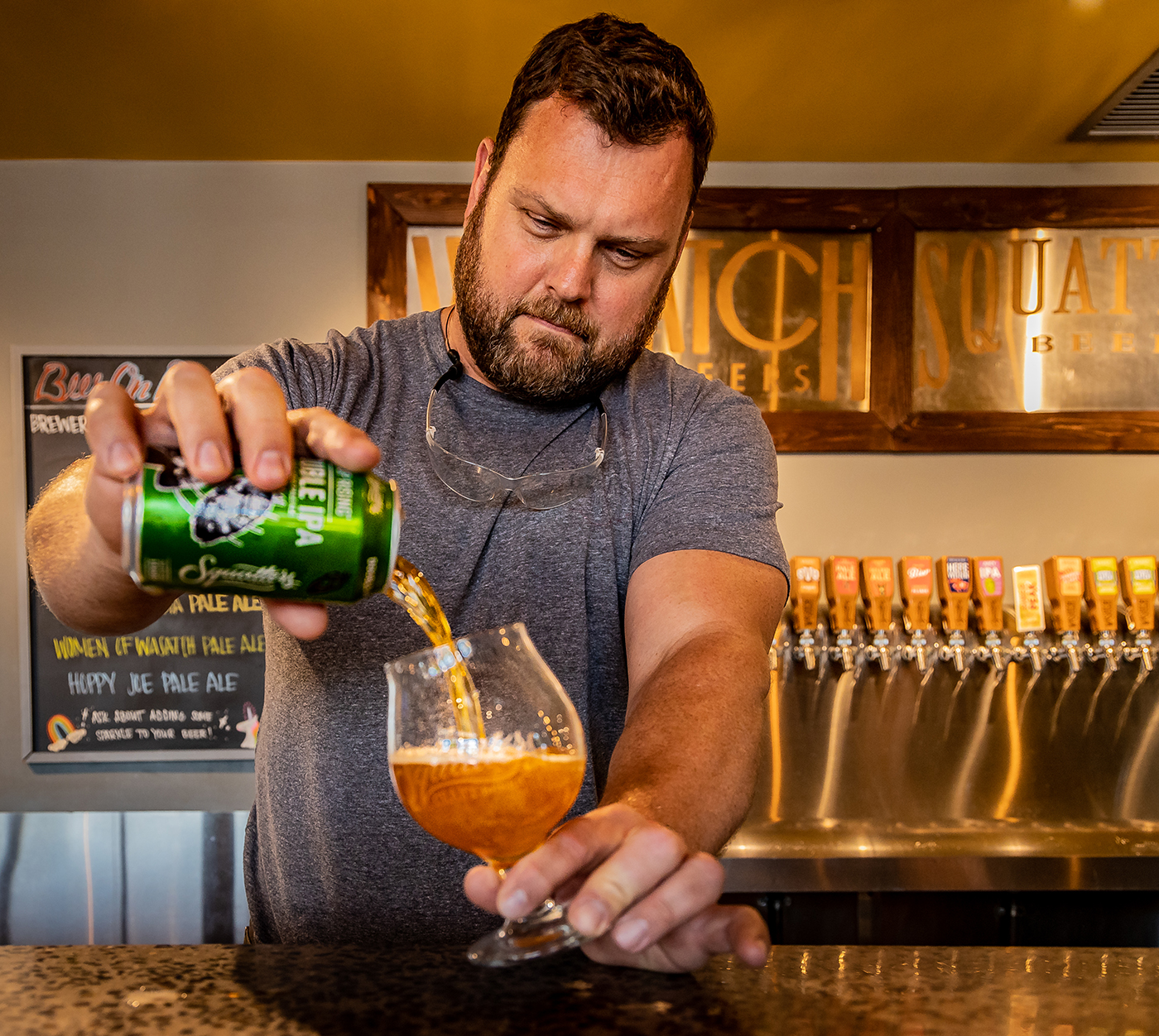 Inspired by the Song Exploder podcast, which digs into the history and making of a single song, we follow suit with a dissection of iconic local beer, Squatters Craft Beers’ Hop Rising. Hop Rising is a 9%-ABV double IPA which Utah Brewers Cooperative Operations Director Adam Curfew has been around for since its beginning, when he was Squatters’ Head Cellarman. Amid its balance as bold but drinkable, Curfew gives us a taste of why Hop Rising is a local legacy craft brew.

SLUG: At the time of Hop Rising’s inception, where was the world of craft beer, and what were Utah’s and Squatters’ place in that?

Squatters: Craft beer was growing rapidly. However, there were not that many packaging breweries in Utah. I don’t know the number for sure, but I don’t remember there being more than 10. We were one of the largest breweries in the state, and I think we were around [the] 50th largest craft brewer[y] in the country.

SLUG: Per your memory, what informed craft beer lovers’ appetite for hops, hops and more hops in their beer in 2009?

Squatters: At that time, people were really into pale ales and IPAs. We were making quite a bit of Squatters IPA and Full Suspension Pale Ale. We used to call Full Suspension “Full Compensation” because we drank so much of it that it was basically part of our paycheck. We had started hearing about double IPAs coming out of California, such as Pliny the Elder. It almost seemed like a novelty at first. Like, “Wait, how much alcohol and how many hops? That’s just crazy,”—until you tried it and they tasted great.

SLUG: When, how and why did you and Squatters decide to brew, distribute and continually produce Hop Rising?

Squatters: We decided to make Hop Rising after a few people around the brewery had been out of state and started to taste some of the great examples of the style—Pliny the Elder from Russian River, Myrcenary from Odell and Hop Slam from Bells. I remember being a big advocate for us brewing one for Utah (begging to brew one is more like it). The key was when Squatters co-founder Peter Cole had a few and loved the style. Once he was on board, it was a go … There were four people who worked on that recipe: Dan Burick, who was Brewmaster at the time; Jon Lee, who was Head Brewer; Dave Mckean, who is the Head of Quality Control; and myself.

SLUG: Hop Rising being a bona fide hop bomb, what hops went into it and why? What were you trying to bring out with its taste per its Double IPA style?

Squatters: Bravo was and is one of the main hops; we used CTZ and Cascade. We really loved the grape flavor we got and still get from Bravo. We like the piney flavor from CTZ and the citrus from Cascade. We wanted a big hop presence but for it to feel rounded and smooth.

SLUG: What challenges might there have been in pioneering this beer, and how did you overcome them?

Squatters: The main challenge we had was actually brewing a 9% beer. As alcohol goes up, it makes for a rough environment for yeast to live and work in. We were also getting some off flavors from stressing the yeast caused by the alcohol level. We actually ended up having to find a whole new yeast strain that could handle making such a strong beer. It took a lot of experimentation, and a lot of beer was thrown away in the process of getting it right.

SLUG: When you got Hop Rising where you wanted it, what about it (aroma, taste, etc.) did you like most?

SLUG: How much of yourself—as a brewer and a person—do you feel Hop Rising reflected when you made it? How about now?

Squatters: Quite a lot. I have always been interested in trying new styles and hopefully making a great example of that style. I also love to make balanced beers. To me, the best beers are the ones that when you finish one, you immediately want another one. This has been my goal since I started homebrewing in 1994. As far as how the beer represents me as a person, I feel like Hop Rising has nothing to prove—it’s not trying to have some huge IBU number and prove that it’s the hoppiest beer on planet earth. It just wants to be a delicious beer with the right balance. I try to live like that as well—happy with who I am and with nothing to prove. I strive to live a balanced life.

SLUG: The likeness of Jason Stock is an iconic element of the Hop Rising label. Why was he chosen to model for it?

Squatters: Because he’s so damn sexy … Our fantastic former Marketing Director Amy Coady came up with the Jason-with-a-pitchfork idea … Jason is a great brewer and human in general. He has taste in metal and heavy music but is one of the nicest people you will meet. I think Hop Rising is very similar. It is a big beer with a ton of flavor, but it isn’t beating you over the head with it.

SLUG: People in the local beer and music communities seem to make a tacit connection between Hop Rising’s imperial, boozy 9% ABV and Stock’s tastes in metal and heavy music. How might you feel like those two elements interlink and complement each other?

Squatters: Jason is a great brewer and human in general. He has taste in metal and heavy music but is one of the nicest people you will meet. I think Hop Rising is very similar. It is a big beer with a ton of flavor, but it isn’t beating you over the head with it. It’s the chunky power chord of beer. We, as a brewery, have always had a lot of local musicians as employees. At one point, about half of our employees were in bands.

SLUG: Hop Rising has grown as a brand in and of itself with Squatters’ Tropical Hop Rising iteration. Why was making a mango- and citrus-driven version of this beer an exciting element of this double IPA’s growth, and what was the context in the craft beer movement?

Squatters: Tropical Hop Rising was born out of us wanting to take a beer we love and see what we could do with a very similar formula but different hops … This beer actually contains no fruit. All of the fruit flavors are derived from the hops. We started messing with test recipes in late 2017, and by the spring of 2018 had arrived on a recipe we were happy with. It’s really in the hops you choose and the way in which you use them. The type of yeast you use can really help coax the tropical flavors out of the hops as well.

SLUG: How and why might Tropical Hop Rising be a gateway beer for people to become hop heads?

Squatters: I would say Hop Rising and Tropical Hop Rising can both qualify as gateway hop head beers because of the drinkability of them. I’ve talked with many people who have told me “I don’t usually like hoppy beers, but I love this.” Once you taste them, it opens people up to the beauty of hops.

SLUG: Squatters has been able to produce a Texas-exclusive version of Hop Rising, the Texas Twist. How did it get to Texas?

Squatters: Texas was one of the first states outside of Utah to sell Hop Rising. They have been very kind to us. Since we are part of the CANarchy Craft Brewery Collective, we have a sister brewery, Oskar Blues, who has a brewery in Austin, Texas. So we got a wild hair to try and thank Texas for buying so much of our beer, [and] we figured we would make Texas Twist Hop Rising brewed in Austin based on a recipe we designed but with the Oskar Blues house yeast strain. The beer turned out great. I wish we could get more of it up here, but they sell out too quickly.

SLUG: An element of Hop Rising that speaks to its longevity is its special editions that have benefitted the fight against cancer: the Pink Hop Rising can (2017) and Brewing Funds the Cure (Hop Rising, 2020). Why is this beer the masthead for these kinds of benefits?

Squatters: We decided to involve Hop Rising because it is such a popular beer and we ship it to 13 different states, so it allowed us to spread the word in the most effective way. Many of us at the brewery have had our lives affected negatively by cancer, so we felt very strongly about contributing to awareness and helping monetarily as well. By doing this with Hop Rising, we are able to produce 194,000 cans of Pink Hop Rising cans every October for Breast Cancer Awareness Month.

SLUG: Why has Hop Rising been a staple beer, both locally and in its growth into new markets?

Squatters: Consistency has been key. We try to make sure you get the best, freshest Hop Rising you can. I have mentioned its drinkability as well. That is a big one for me.

SLUG: Past its beginnings in a 12-ounce bottle, whether it’s in bottles or cans, what’s the full breadth of forms and sizes Hop Rising is available in?

Squatters: We decided that bottles had too much of an environmental impact, so we discontinued bottles in 2020. So now you can get it in a 12-ounce can in six-packs or 12-packs, and you can get a fresh-filled, 32-ounce crowler if you come down to The West Side Tavern, which is the pub at our production brewery at 1763 S. 300 West.

SLUG: What do you like most about the beer now?

Squatters: It is my favorite beer to have after a hard day at work. I love that it is flavorful yet crisp and thirst-quenching. I also like that so many people like it and it makes them happy. That allows me to have a job to come home from. So thanks to all the Hop Rising drinkers out there. Cheers.