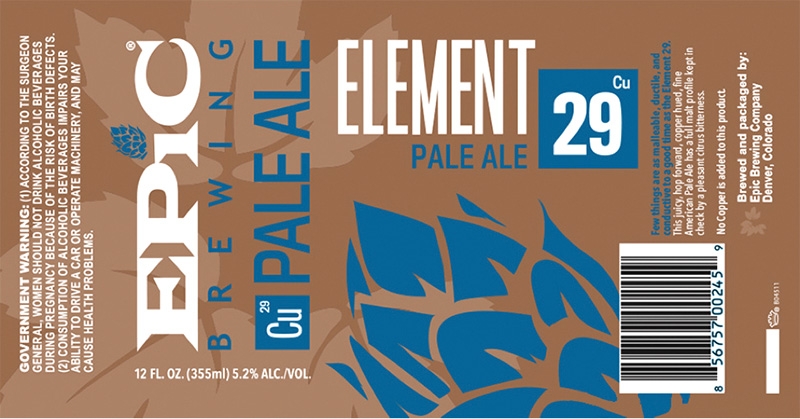 The holidays are coming, and there’s going to be a lot of liquid cheer coming your way, which is likely going to be big and spicy like the season it represents. It’s truly one of best times of the year for beer. However, we’re only human. Our palates were not designed by Viking gods that have been gifted with the constitutions of Thor. We mere mortals can only last for so long on big, spicy booze bombs—our tongues and psyches need the occasional respite between double gingerbread espresso stouts and Danish honey-fig barley wines. That’s why, for this month’s beer reviews, I have opted to open your eyes to some beers that can fill the gap between übercheer and palate overload. The following beers are full of flavor and buzz, but will keep you in check when you’re on the edge of a burnout. It goes without saying that a good deal of respect and responsibility should be shown toward celebrating when your celebrations get flooded with so many high-alcohol beers. Please be safe!

Element 29
American Pale Ale Beer
Brewery/Brand:
Epic Brewing Company
ABV: 5.2%
Serving Style: 12 oz. can
This pale ale pours a golden-copper color. The head is foamy and sturdy, and sticks around to the bottom of the glass. The tastes starts malty sweet with a bit of caramel and cookie-dough flavors. Ripe peach notes come next and work well with the malts. Hops take over toward the end, bringing big floral, tangerine and grapefruit-zest flavors. The finish is moderately dry with a bit of lingering bitterness on the back of the tongue.
Overall: The amarillo hops used in this beer make it appealing, adding great fruity notes while the relatively low ABV makes it highly drinkable.
Apple-A-Day Apple Ale Beer
Brewery/Brand:
Wasatch Brewery
ABV: 5.0%
Serving Style: 12 oz. can
This ale pours a brilliantly clear-golden color. The head is large and foamy at first, but quickly fades to sudsy cap. Before I could stick my nose down into the glass, I got the first whiffs of apples. As I got in closer, I started to get a big blast of Jolly Rancher–type, green-apple aromas. There is a slight hint of Vienna malt beneath as well. The taste starts with toasty malts. Apple cider comes next, which is much more subdued than the nose led me to believe. The are some slight lemony flavors in the end. It has a soda-pop type finish.
Overall: If you’re wanting a cider, get a cider—this may not satisfy a big apple craving. This is a beer with apple flavors, and no, this is not gluten free.
Bonanza Dry Hopped Golden Ale Beer
Brewery/Brand:
Payette Brewing Company
ABV: 4.0%
Serving Style: 12 oz. can
This one pours a light-bronze hue with a fair amount of sudsy foam on top. The nose has some muted floral notes and a smack of citrus-zest aromas. There is some dry, malty sweetness as well. The taste starts sweet with caramel and a crepe-like bready-ness. Biscuit notes come next, adding a bit of dryness. A hint of rose hips and grapefruit peel come in next, providing a nice balance in the end. The finish is crisp and clean with a bit of berry sweetness.
Overall: The low ABV and its refreshing qualities make this a perfect ale when the big alcohol bombs may not be an option.
Cheers!
Photos: