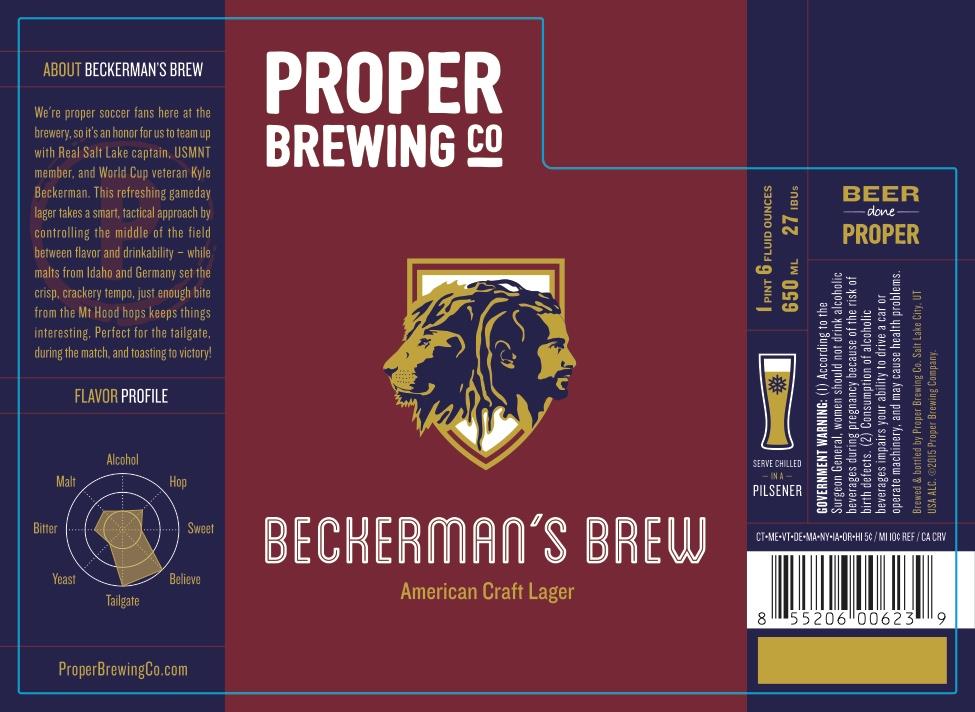 Beer of the Month: Beckerman’s Brew

It’s no surprise that beer and sports go hand in hand. If you’re watching a sporting event—whether it’s live or on television—the odds are good that you have a beer nearby. The big breweries are keenly aware of this enduring phenomenon and poured well over a billion dollars into sports-driven advertising in 2015. Big beer often locks up arena and stadium contracts as well, making sure that when you need a beer, you have one of “their” beers first and foremost. This can make it hard for the little mom-and-pop-shop breweries to break into this lucrative area of beer and sports (outside of their normal operations) because of this. But it can be done with a little savvy and a bit of help from a devoted fanbase. Basically, you need to keep the team and the leagues off of the imagery and packaging. Well, what else is left, you may ask? The athletes. Unless he or she is already locked up in a contract, they’re good to go. Epic Brewing did it a few years ago with Rimando’s Wit, featuring Real Salt Lake’s Nick Rimando. Uinta Brewing inked a deal with RSL at the beginning of the Major League Soccer season to become the “Official Craft Beer of RSL.” Now Proper Brewing has entered the fray with a beer co-created by Real Salt Lake star Kyle Beckerman. This new beer reflects the attributes one would expect from an athletic soccer all-star: It’s light, crisp and perfect for watching or post-match hydration.

Description: This sampling of Beckerman’s Brew comes from the draft handles at Proper Brewing Company’s Brewhouse Pub. It pours a mostly crystal-clear, pale-straw color with a single finger of dense, white head. The head retention is strong, but eventually reduces down to a nice lingering cap of foam, with a moderate amount of streaming carbonation retaining the cap. As the beer recedes from the sides of the glass, ribbons of spotty, soapy lacing clings across the glass, creating web-like lattices. The nose starts with a bit of lemon, dry crackers and biscuit. Light pepper and herbal/grassy hops round out the aroma—pleasant but somewhat subtle for what should be quite aromatic foam. The taste starts similarly to the aroma. Lemonpeel, wheat cracker and biscuit come right out, signaling that this is a toasty pilsner. Next, a bit of honey-like sweetness comes in with some light, peppery hops stabbing at the tongue. Herbal notes along with earthy grasses come after, rounding out the flavor chain. The finish is lightly dry, fueled on by the herbal/spicy bitterness from the hops and the lack of cloying malts. The mouthfeel is on the light side for the style. It’s clean with minimal yeast notes, medium prickly carbonation and zero warming alcohol.

Overview: This beer is tailor-made for the cusp of summer. Overall, this is a very good American pale lager. It touts an all-around tasty combination of robust cereals and toast, combined with the twangy/earthy hop flavors that create a nice balance that is smooth, crisp, clean and refreshing. This is great for sporting, mowing the lawn or working on your TV tan while gaming. Look for Beckerman’s Brew at Proper Brewing Co., better beer bars with a Proper tap handle and Harmons Grocery Stores.