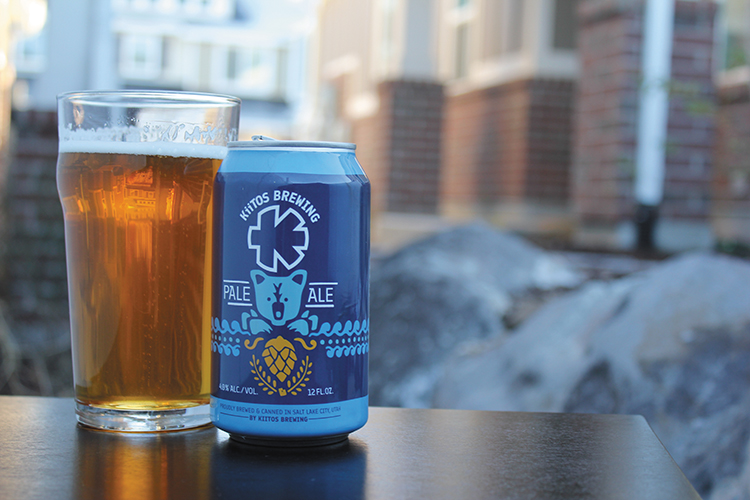 Beer of the Month: Pale Ale

By Chris and Sylvia Hollands
January 4, 2018

A bellowed special announcement welcoming a new brewery in the Beehive State, we’ll admit, gets us extremely excited, every time. Utah may not have the wall-to-wall suds factories like our neighbors all around us, but we do have traditional and quality breweries in abundance. Needless to say, we cannot help but say “thanks,” or in Finnish, “kiitos.” Opening their tavern this past month, Kiitos Brewing is one of Utah’s shiny new breweries. Operating a specialized brewhouse, they use equipment designed to reduce water and grain usage and lowering the impact on was ate overall. Kiitos‘ first beers off the canning lines were familiar styles to most beer fans, including a blonde, amber and pale ale. These make up a solid foundation for most breweries creating their core selection of beer. You may have already started to notice three of their staple beers popping up in local convenience and grocery stores—and they successfully continue to move one foot in front of the other. They recently released the first of their high-point beers, an IPA and a massive Double IPA.

Let’s take a look at one of the beers from this brewery that you should be able to find pretty easily, the Kiitos Pale Ale.

We enjoyed Kiitos Pale Ale from a nonic pint glass, which did a good job allowing the beer to breathe as well as show off all of its key characteristics. At first pour, this pale ale is noticeably not like any you may run into in the valley. Pouring a vibrantly clear-golden color, it showcases the tiny bubbles cascading with a swiftly fading, white head. An initial whiff of sweet malt and musky hops brings us back to our first experiences with craft beer—like when hoppy beers filled just as many drinkers with wonder as with bitter beer face. Now the times have changed, and most pale ales are quite tame. The primary taste of this new beer greets you with so many different flavors; it’s quite refreshing. If we hadn’t already laid our eyes on it, we may have mistaken this beer for a more hop-forward IPA. Distinguishing itself from its peers, Kiitos Pale Ale has an above-average mouthfeel with a pleasantly mellow tongue sting. Enjoyably, that sting quickly fades to a piney citrus aftertaste.

Kiitos has done something special. They have created beer that challenges an entry-level beer connoisseur while entertaining the more experienced throughout the consumption of this wonderful brew. They continue the recent trend by new breweries in our state by committing to delivering quality beer from the first day they opened up to the market. It’s because of this dedication many of the new establishments have become instant favorites in the community. They continue to build a strong following who’s willing to pack the taprooms and lines around the block for the latest special release. On 608 W. 700 S., Kiitos Brewing is located in the most craft beer–dense area in the entire state for another great option to pick up a well-crafted beverage while enjoying the company of friends. When you visit their brand-new tap room, make sure to snag a taste of this fresh pale ale because we know you will not be disappointed. As a matter of fact, we hope you will say, “kiitos!”