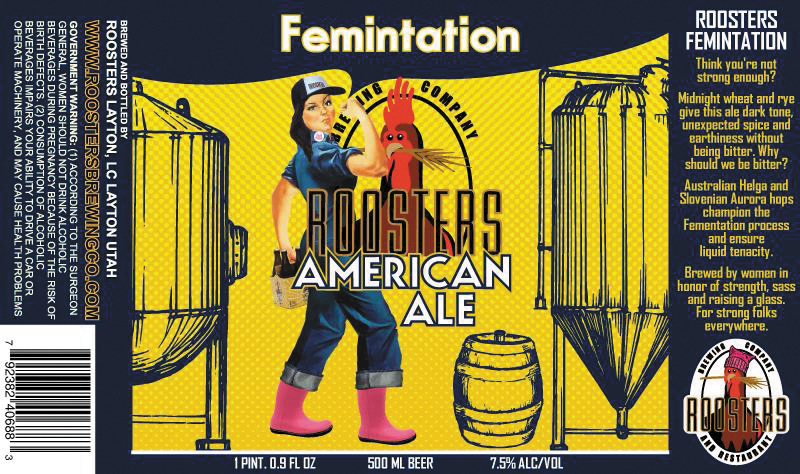 Back in May of 2010, I was approached by the keen minds at SLUG Magazine to be a contributing writer in their visionary Beer Issue. At that time, no other publication in our market had the foresight to dedicate an entire issue to Utah’s burgeoning craft beer scene. Now, most print and online publications have followed suit. In January 2013, I was given the honor of writing the monthly beer profiles, which in my opinion, is the best gig at SLUG. Sadly, this will be my last beer profile for SLUG. It has been my honor to work alongside such a talented group of forward-thinking, young journalists and artists. They have definitely made me better at what I do, and I can’t wait to see what they create in the future. Cheers to you all! Now, let’s talk beer.

Last March, on International Women’s Day, Roosters Brewing Company committed to brewing a special beer to celebrate women in the craft beer industry. Roosters’ own Jacquie King Wright was the obvious choice to create this beer. Wright runs Roosters’ Ogden brewhouse and is one of only three women brewing beer in the state of Utah. Wright chose an American Strong Ale as her inspiration, fortifying it with all of the traits that make our “sisters in suds” such an important part of Utah’s beer culture.

Description: From one of Roosters’ unique-looking 500-milliliter bottles, this beer pours a somewhat viscous, pitch-black color with a solid two fingers of dense, brassy foam that manages to retain its position on top of its liquid-obsidian base, which is due to the good amount of streaming carbonation retaining the head. After a minute or so, the head reduces down to a thin cap that rests until the bottom of the glass. Soapy trails of foam lacing clings down the shaker glass. The nose has cocoa and dark chocolate with notes of coffee and roasted malt. At the back end of the aroma, light pine and floral grasses tickle the nostrils. It’s a complex smell reminiscent of chicory coffee. The taste begins with an appropriate dose of dark pumpernickel bread, cocoa and coffee. Hints of molasses and coffee-soaked biscotti come next with a trace of light vanilla and earthy, roasted barley. The end has an aggressive amount of pine and spicy, herbal hops that complement the malt sweetness from the beginning of the sip. The finish ends up being fairly dry and lingering as the hops and roasty character duke it out for supremacy.

Overview: The balance here is quite nice. The robust flavors and complexity of dark/roasted malt flavors work well together. The carbonation gives the body a pleasantly smooth and somewhat slick, creamy feel. The alcohol is well hidden with minimal warming effects on the back of the throat. Overall, this is a very good American Style Stout. It does lack most of the malt-forward attributes that an American Strong Ale normally possesses, so if you’re looking for a malty beer, this may disappoint. But if hoppy and robust are a must in your wheelhouse, this complex dark beer will fit in well in your cellar.