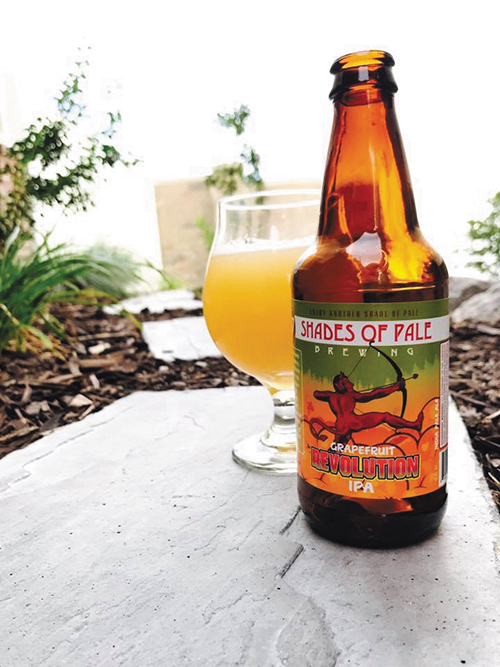 Beer of the Month: Grapefruit Revolution

We love Mike “Mikey” Riedel and we are unashamed to admit it to everyone. We first met Mikey a few years ago and are proud to call the Godfather of Utah Beer our friend. There is no one who doesn’t currently own or brew for a local brewery who advocates more in the advancement of craft beer in our state like he continues to do. In a place where local dogma attempts to dictate our drinking habits, we worship at the altar of the mastermind behind Utah Beer Blog. Because of this adoration, we decided to piggyback on his hard work and showcase a beer that recently won “best session beer in Utah”. According to his website poll, the winner is Shades of Pale Brewery‘s Grapefruit Revolution. The Utah craft beer scene is an up-and-coming powerhouse and although it may seem slow in comparison to our neighboring states, we appear to be on the cusp of an explosion. The results of Utah Beer Blog‘s recent poll indicates two critical points: Utah’s beer game is improving each year, and we are not nearly as far behind as we (or anyone else for that matter) think we are. And, Shades of Pale hit the right note with Grapefruit Revolution by accurately describing and executing exactly what the consumer wants and will experience when they drink their beer. Hundreds of voters voiced their opinion, confirming that Shades created Utah’s best session IPA.

Description: A brief history of Grapefruit Revolution shows that the beer is an evolution of sorts. Starting as a traditional Belgian-style white IPA, Head Brew Master Trent Fargher tinkered with the yeast strain, ultimately leading to the version that’s now available. When this beer is poured, the murky clouds remind you of the wonderful white IPA lineage of its past existence. Pouring an inversion-sunshine color, it’s true to our homefront. With a generous, white bubbly head settling smoothly, it leaves an ombre-like visual in the wide-mouth tulip glass. The smell coming from this wheat IPA is exactly what should be expected. Citrus and heavy grapefruit never diminish throughout the entire consumption. The first sip, surrounded by a fresh flavor cloud of pure grapefruit (as the name suggests), is amazing because it contains no added fruit. That’s right, folks, zero fake flavors here — proving that the flavorful power of hops and yeast combination is perfectly blended. This hazy brew has a thicker-than-average mouth feel which seems to set it apart from many of its primary competitors in the same category.  Simply put, Grapefruit Revolution is like a small guy fighting in a bigger weight class and kicking some ass.

Overview: Shades of Pale is one of the breweries who is willing to take risks, with many of them paying off. As a result, we are lucky to get to try new, innovative styles of beer. Grapefruit Revolution is one of these calculated risks, starting out as one thing and becoming something even more special. Utah is known for lower alcohol content beer, however, if you can put a product on the shelf that can stick within the strict state guidelines and pose as a big boy, we are never going to complain. The truth is, in the end, we respect the opinion of Mikey and his followers. Since they have decreed this to be the best session beer in Utah, after careful consideration, they just may be completely right.