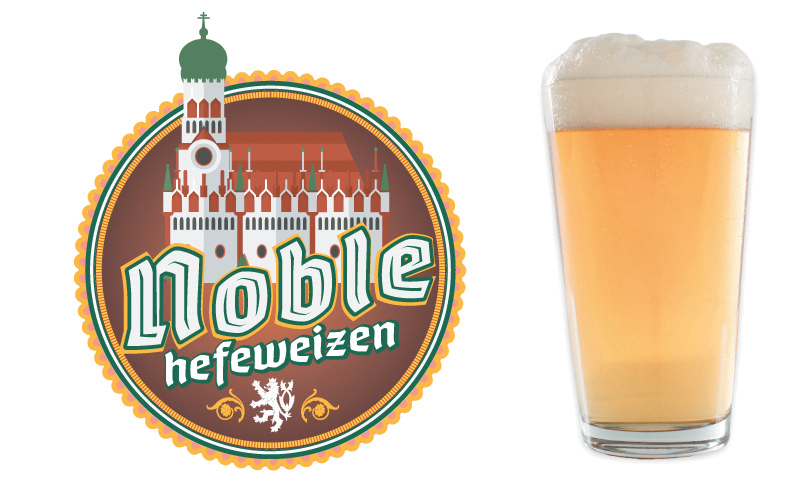 Beer of the Month: Noble Hefeweizen

Ah, Germany. The country’s very name is almost synonymous with beer. Some of the best beers in the world were born here, and every region tends to specialize in a particular style. Germany’s Bavarian region is best known for their Weissbiers. There, they’ve spent centuries perfecting this style of beer, making it as common as bread in their daily diets.

Midvale’s Bohemian Brewery takes old-world beer styles like these seriously. They’ve made it their mission to focus on these century-old European styles that may get lost in all of the new hybrid beers flooding the market. Bohemian’s Noble Hefeweizen is one such beer. It’s a bit of a rarity at Bohemian’s lager house, as it is an ale (it’s warm fermented versus cold fermented), which provides assertive flavors with a light body.

Description: The Noble Hefeweizen looks pretty much like a textbook hefeweizen: cloudy and almost murky. Using the flashlight on my phone, I can barely get the light to glow through at the narrowest point of my tall weissbier glass. The light that shines through is a quite light orange/apricot color, with a thick dollop of meringue-like foam perched on the top. The foam eventually begins to shrink after a few minutes, leaving a single finger of thin coating on top as I drink my way down to the bottom of the glass. At the bottom, I see a bit of yeasty sediment.

Once I get my nose on top of the foam, yeast punches back at me, full of doughy, bread-like qualities. The yeast drives more than just bread-like qualities, though—on further exploration, I start to pick up some banana-like esters that are round and sweet. Finally, buried in the back of the aroma is a pleasant, lemony twang that wraps it all up in a nicely balanced bow.

The taste takes its cues from the nose but with a cleaner and less fruity quality. Subtle, unripened banana pops out onto the tongue—it’s far less sweet than some banana-bread-driven German wheat beers. The next flavor to envelop the tongue is a bit of white cake that has had sex with unsalted Ritz Crackers. At times, the intermingling flavors border on spiciness. Hops are practically undetectable—they’re there but are masterfully hidden to provide balance over flavor. As in the nose, the end has a nicely subtle, lemony tartness. As this beer matures in the keg, I’ve found that these lemony notes become more pronounced, which, in my opinion, only adds to the balance and enjoyment of this ale.

The way this beer feels in the mouth is slightly unusual. It’s slick with a ghostly, dairy creaminess. This gives it an extremely smooth and easy-to-drink quality. You can thank the yeast once again for that, I suspect.

Overview: This is one of those great beers that will fit into any climate at any time. Its low alcohol and medium body combined with its banana/lemon fruitiness makes it a triple threat among its German-inspired beer brethren. This beer is available year-round but is only on draft at Bohemian’s Brewhouse and select bars and restaurants around the Wasatch Front and Back. If you can, experiment with fresher and older kegs to identify which level of tartness works best for your palate.