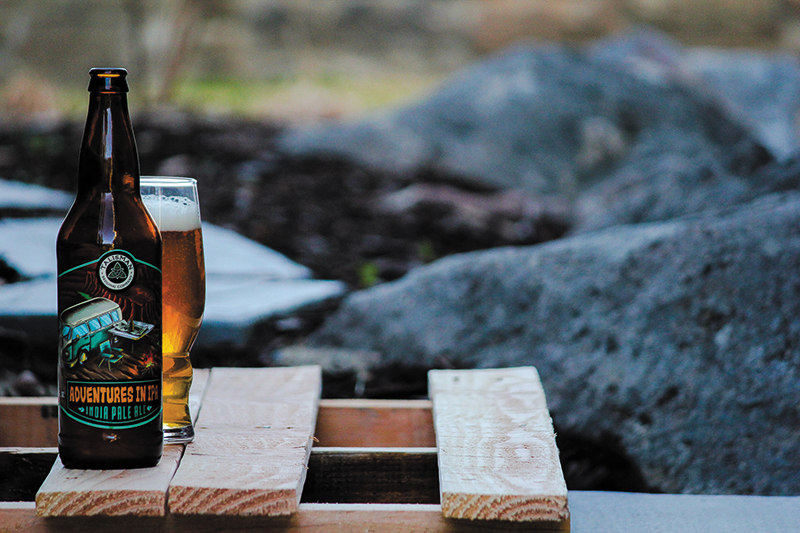 Beer of the Month: Adventures in IPA India Pale Ale

Exciting things are happening up north in the good old city of Ogden. For adventurers, the sky’s the limit, and for beer lovers, the local offerings are definitely noteworthy. Several established craft brewers have obliged the town, and a recent surge of up-and-coming brewhouses is underway. Utah’s most northern production brewery, Talisman Brewing Company, is one of the rooted makers steadily producing quality craft beer. Surrounded by myriad outdoor-adventure destinations, Talisman heeds the natural call to provide crisp, refreshing beverages, perfectly paired to aid in your adventure. Recently, they released a new series of brews called Adventures in IPA. The lineup includes selections showcasing different hops while varying the style with each version. This type of variation release is not a new concept to the Utah craft scene, but the name of their label is fitting in a clever way. These brewers plan to enter the IPA arena with excitement in their eyes. For this rotating label, the first out-of-the-gate brew is Adventures in IPA India Pale Ale, and it aptly screams adventure.

Batch No. 1 showcases three popular hop varieties: Amarillo, Mosaic and Citra. Cracking the top, a slight hiss signals that we are in for something special. Drinking the inaugural offering of Adventures in IPA from an IPA glass just seemed to make sense. The beer’s bright features pop during the cascading transfer into the curvy, thin glass. This vibrant beverage is burnt orange, like a sunset in a wildfire sky. A fluffy, white meringue head forms atop, swaying like a hula dancer throughout consumption. The foam is sticky, causing substantial lacing to cling to the glass. The aroma corroborates the clear impact these hops have on the beer character. Scents of tropical fruits and tangerine cut through the air. The nasal suggestion is merely the opening band at this hop fest. The first sip is overloaded with tastes of fresh citrus zest and sweet malts. It finishes clean with a targeted, slight bitterness—a seemingly lost characteristic of the IPA (in the world of hazy). This flavor elicits reminiscing about adventures with IPAs we’ve had in the past.

The IPA is still the reigning champion in the craft beer world. Its popularity has far passed the latest trend phase, cementing itself in the craft beer community. Dusty Williams, Head Brewmaster and Owner of Talisman Brewing Company, is excited about the future possibilities of the rotating IPA label, Adventures in IPA. The series will highlight varieties of the India Pale Ale such as black, Belgian-style and red. “It gives us the ability to have some fun with it and keep it ever-changing,” says Williams. As far as batch No. 1 goes, Williams will use consumer feedback to determine if he should revisit the recipe in the future. If the rest of the series is executed as well as batch No. 1, we cannot wait to start the next adventure.

Talisman is a local favorite that is quickly becoming a do-not-miss for out-of-towners. When we visited, they were just placing the finishing touches on their tavern, which opened on April 13—a beautiful place to grab a pint with some friends. For now, ante up by posting your Adventures in IPA voyages on social media to the hashtag #AdventuresinIPA, and you may win some cool Talisman Brewing Company swag.