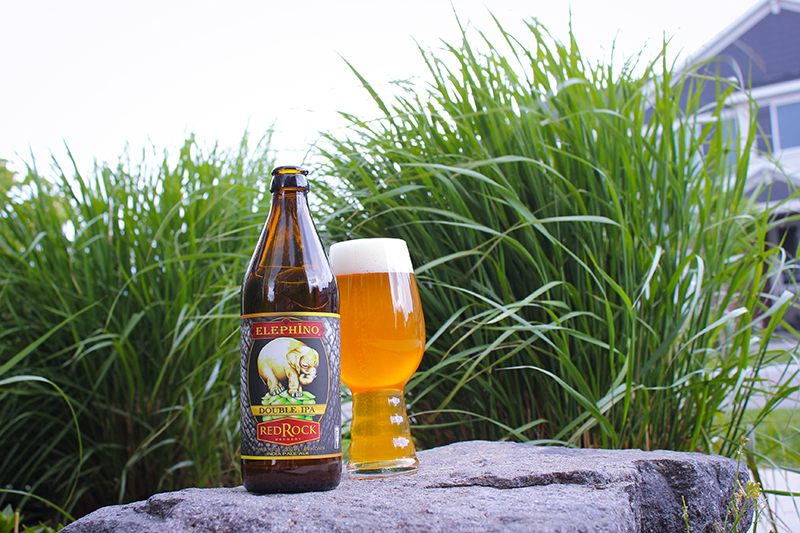 Beer of the Month: Elephīno

For this month’s showcase, we sought guidance from the Utah craft beer community. We asked how the homegrown beer scene stacks up when it comes to naming its babies—or, in other words, beer. In the Facebook comments, we saw definite pockets of breweries attempting to be creative. But as a whole, our local craft group needs to step up the name game. With beer on the brain, we waded through classics like Big Bad Baptist, Polygamy Porter and the Outer Darknesses of the world. Then we landed on Red Rock Brewing Co.’s Elephīno Double IPA. RR must have been asked once or more how to voice “Elephīno” because, according to the bottle, it is pronounced “el-uh-fine-oh.” A Utah Craft Beer Community member commented, “Hell if I know,” and that gets you pretty close, too.

We get it. Naming people, pets, cars or even plants can be quite daunting at times. We named three children, taking the biggest risk with our youngest, Brixton. We’ll bet that the waitstaff at Red Rock’s restaurants get questioned about Elephīno. “How do you pronounce it?” “What does it mean?” We get questions like, “Where did it come from?” “Is he named after the clothing line?” “Is he named after a Clash song?” As for us, we are just rock n’ roll fans. And although being named after a Clash song seems cool, his name comes from a concert venue in the United Kingdom, O2 Brixton Academy. To each their own, huh?

We took no time in uncapping the oversized bottle and pouring it into a proper IPA glass. Elephīno showcases a clear-orange color that looks like roasted toffee or reduced caramel. A frisky layer of rocky, inconsistently sized frothy bubbles tops the glass. The foam quickly dissipates into a white halo sticking to the rim. Hints of aromas like sweet, bready malts and fruits resonate as the glass is raised. The mouthfeel on this double IPA is sturdy with bite. Bittering hops add a sharp, crispness to the backbone, aiding the transition from the grapefruit notes and citrus zest, which is balanced with the malty sweetness. Elephīno seems to be a good bridge between the new citrusy beers and the big West Coast IPAs of the past. It carries a slight piney aftertaste following each sip. It’s good—we knew it would be.

Red Rock Brewing Co. recently went through a transitional period. Now, everyone is looking forward. Red Rock’s Elephīno is near and dear to our hearts because it was a big Utah beer we fell for during our craft conception. We are not saying Elephīno is the “best name” in Utah beer, but we almost think of it as one of our “beer kids.” Ultimately, it’s a about having a beer, sparking conversation and enjoying each other’s company, and that’s cool. Now, if we can get together and sip on an Elephīno while cranking Mastodon, Motörhead, Frank Carter and the Rattlesnakes or Faith No More live at O2 Brixton Academy, then we have a party!