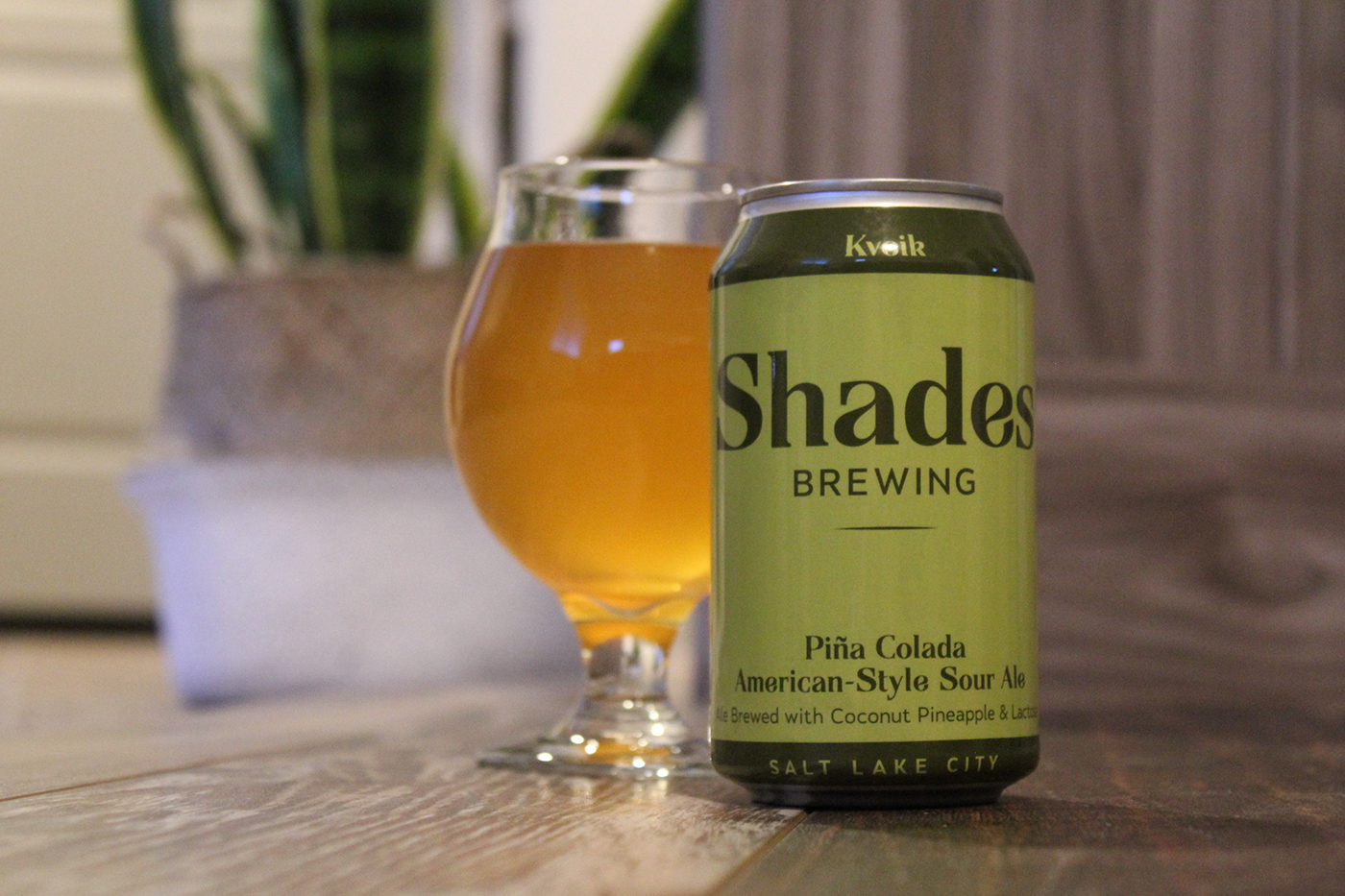 Beer of the Month: Piña Colada

By Chris and Sylvia Hollands
February 6, 2020

Utah’s own Shades Brewing systematically continues to make excellent moves, all while improving themselves and their products. Previously located in Park City, this small brewery simply outgrew their original location. In 2014, the old Hi-Grade Meat building near Pat’s BBQ in Salt Lake City became the new home base. Initially, this place seemed a little ambitious due to the size of the property. But the Shades team, led by owner Trent Fargher and Brewmaster Marcio Buffolo, filled it in nicely with a welcoming taproom and loads of shiny brewing equipment.

These innovative folks rebranded several of the classics and introduced key additions such as the popular Grapefruit Revolution and Slick City Citrus IPAs. However, the biggest move that Shades may have made is introducing its Kveik line of beer to the world. Focusing on creative fruited sours and out-of-the-ordinary brews, the lineup has been a hit. These small batches typically sell out with a furious quickness usually seen during special hazy releases these days. Shades recently underwent another rebranding, which included canning beer. This includes two Kveik variations, the piña colada–inspired, American-style sour ale, as well as the Kveik 1 Golden Sour Ale. We love Piña Colada anything—this was sure to be a treat.

Piña Colada comes in a can wrapped with a pineapple-yellow label, helping the drinker to identify the beer quickly. This color is strategic and seemingly perfect for what you are about to experience. Excitedly, we crack the top and pour the 12 ounces of tropical pleasure into a tulip. A rapid, bubbling, white foam leaves nothing more than a ring of microbubbles after quickly fading into the liquid. Because of the Kveik yeast, this sour smells quite clean. Aromas of ripened banana, coconut and a hint of tartness flare above the glass. This variation pours a hazy-yellow color with hints of orange in the right lighting. It has a gentle mouthfeel, keeping it refreshing and easy to drink. If you are not familiar with sour beers, the first taste may be a bit of a shocker with its mellow tang. But, for the experienced drinker, Piña Colada hits the tartness levels at the right notes. The intense coconut flavor lingers well after the liquid is consumed. All in all, the delightful fruits rise to the occasion.

Shades Brewing is carving out their own place in the Utah craft beer world. However, they are doing it in a different way than most others would suspect. By playing to their strengths as well as delivering consistently interesting beer, their popularity continues to grow. The people here understood they have a hit on their hands, and rightly so. Two versions of the Kveik lineup, two years in a row, have won a Great American Beer Festival gold medal: Kveik 1 Golden Sour Ale in American Sour and Kveik Thai Tom Kha in the Herb and Spice categories. Using Kveik yeast as the central, common feature of each of these beers gives them enough consistency while allowing for any number of ingredient combinations Fargher and Buffolo think of.

This brewery has proven themselves to be resourceful and inventive while never stagnating or allowing time to pass them by. Recently, Shades introduced the world to Fit Brewing. It’s an arm of Shades that intends to capitalize on the fact that, though many of us love beer, we understand it’s nice to have low-calorie, lower-alcohol options from time to time. So, just as the Beehive State brought in the higher ABV, Shades filled in a now missing part of the Utah beer world, which is a trend just starting to gain traction nationally.