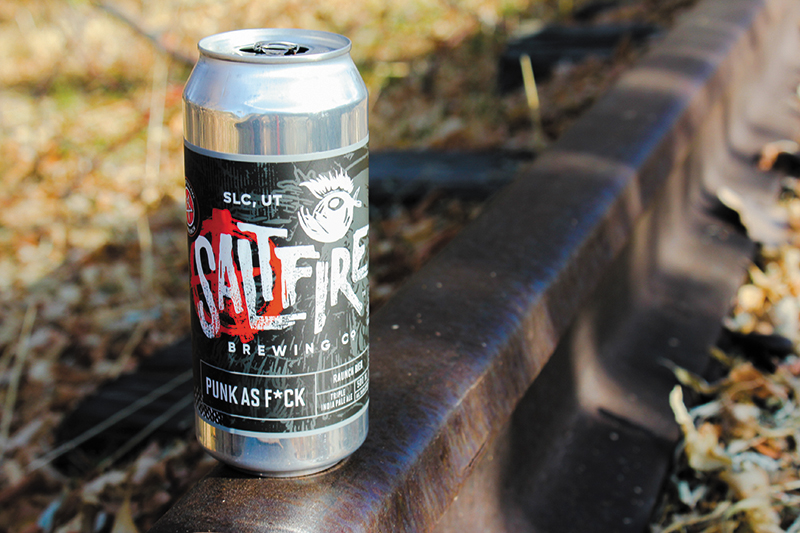 Beer of the Month: Punk as F*ck

By Chris and Sylvia Hollands
December 5, 2019

SaltFire Brewing Co. and Raunch Records schemed together to welcome the darker half of the year while also honoring Raunch’s 10-year anniversary at their current location. ”Beauty is the end.” That was the underground slogan needed to get early access to the pre-release of their goods. Hitting the advance sale, we walked in unknowing of any guidelines. To our surprise, when asked for the pass phrase, we had no idea. Blankly turning around and pulling out our phones, we reviewed the club email. “Ah, yes, there’s a code.” You see, the beauty of the code devised by this Salt Lake “unholy alliance” gave email subscribers the chance to grab Punk as F*ck IPA prior the general release—read the instructions, friends. We headed straight in to collect our treasures.

Raunch Records is a punk and skate shop hustling on and off since 1984. In 2011, the relaunch was a reincarnation. The stomping ground is a cool gathering place to share locals’ love of vinyl records, skateboards and other local outer-ring goodies in Sugar House. The craft beer world is a bit like the punk world. You can start with an idea or a feeling and build on it through hard work and hustle. When SaltFire announced the Raunch Bier, it made total sense. Near the time of the 4-percent-ABV barrier being broken, why not continue to push the limits by offering an 11.5-percent, hoppy beer to fans? Sounds Punk as F*ck to us.

Punk as F*ck comes in a lengthy 16-ounce can. This visual design seems to reflect the DIY spirit of both of the collaborators. It’s equal parts dark and brooding with the anarchy symbol’s deliberate placement. Cracking the top, we poured this tall boy into a mason jar—because why the hell not? The beer pours a smoky reddish-brown, almost concealing the rebellious, high ABV by looking like hibiscus honey or like it’s flower-infused. Hints of sugar and floral hops give off an herbal scent. A rosy, soft, fluffy foam forms and sticks around on top of the beer. Many Triple IPAs seem to blur the lines of barley wines with their powerful sweetness. Punk as F*ck doesn’t. This is a big beer. Don’t be confused by the zip of hops on the tongue. The taste of fresh-foraged pine and bitterness is followed by a soft mouthfeel. Surprisingly in contrast to the sweet smell, it is dry-tasting. But that sugar is an ABV punch to the head if you were not aware of your surroundings. SaltFire did a great job creating a beer that showcases everything a punk beer should be.

We were excited to hear about what SaltFire was brewing. SLUG and Raunch Records have always supported anything and everything in the local scene, including each other. It stems from the ideal of staying loyal to the things that matter most, whether that is family, music and, of course, your core values—regardless of what others think. The craft beer world understands this, as we have seen firsthand. Breweries stick to their guns for the sake of family and core values. They help each other out when there is a need and support each other openly. And there is rarely a disagreement that is not supported with tons of respect. Not to mention, many in the brewery world even have great taste in music. Because that’s when you’re Punk as F*ck. Don’t forget the code!

Beer of the Month: Quintuple Big Bad Baptist
SaltFire Brewing Co.: The Brewery Built From the Bottle Up