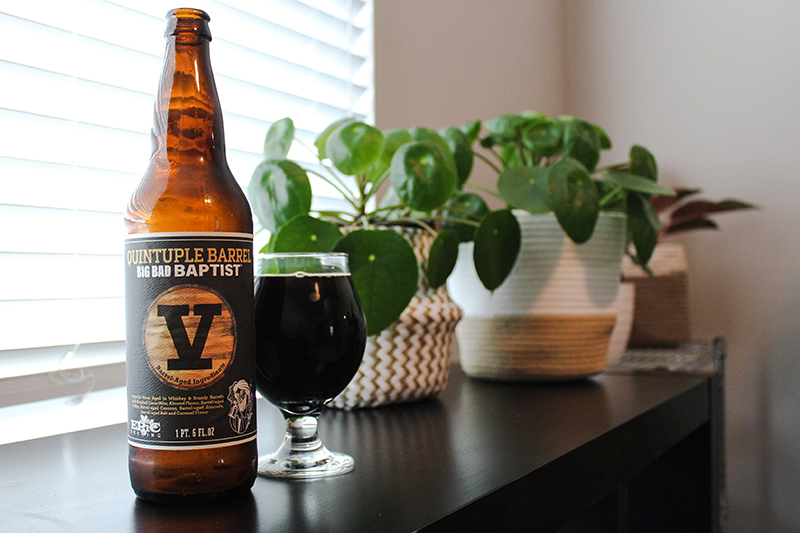 By Chris and Sylvia Hollands
November 7, 2019

We’re thankful, for it’s Big Bad Baptist season! For nearly a decade, Epic Brewing Company has taken care of barrel-aged-stout fans with their exceptional Big Bad Baptist. It is well-regarded in the craft beer community for being not only consistent but also relatively easy to obtain. This beer stacks up against some of the most popular and sought-after “whales” in the beer world. Beers such as Goose Island’s Bourbon County and Oskar Blues Brewery’s Barrel-Aged Ten Fidy are right in line with what you get from the BBB.

In 2016, Epic sent a mini jolt to the senses to many of our beer friends when they announced the Double Barrel Big Bad Baptist. Resisting temptation to blend different barrel-aged BBBs, they took a different approach by using barrel-aged, green coffee beans as the second barrel-aging component. And still, over the next two years, this local brewing establishment continued to add more twists. Epic created a Triple and Quadruple Big Bad Baptist—each with unique barrel-aging components—by aging the adjunct ingredients. This incoming holiday season brings the introduction of Quintuple Big Bad Baptist.

QBBB is an Imperial Stout with five barrel-aged ingredients. It’s not only matured in whiskey and brandy barrels but also with barrel-aged coffee, coconut, almonds and salt to go along with the roasted Cacao Nibs we love so dearly. Allowing the beer to warm before opening seems to help the entire profile shine. Popping the top on one of these guys is like a religious experience—we thought we heard the angels sing. Pouring it into a tulip glass maximizes the whole encounter because it showcases both the aroma and body. This beer is dark with just a hint of a tan halo of head. QBBB has a delicate scent with hints of unsweetened chocolate and black coffee. Guided by a surprisingly smooth and light mouthfeel, distinct flavors of almond, caramel and dark cherrywood shine. The perception changes as you let this beer warm, so don’t be afraid to tiptoe and take your time.

As mentioned, Epic Brewing Company has giving craft beer drinkers what they are looking for in a barrel-aged beer for quite some time. Big Bad Baptist is still a wonderful treat every time we get to have it. Epic understands the trends in the beer world. (They even offer this staple brew in 12-ounce cans from their Denver brewery. We hope to see this soon!) This brewery does a nice job of offering something new and special for each of the last several years, using BBB as the base. Quintuple BBB is just a single portion of the exciting Baptist lineup this year. In addition to this gem, they offer numerous varieties: a Vanilla Brandy Barrel-Aged, Chocolate Rapture, Peanut Butter Cup and, replacing the popular Batista from years past, a Hazelnut Vanilla Latte Stout. As you can see, there is no shortage of fun flavors this year. What will they have in store for us now?

It was exactly five years ago this month when we wrote our first beer review for PorchDrinking.com—our other beer-writing gig—and we chose Big Bad Baptist. So, it seems only fitting to embrace our quintuple year with a quintuple beer based on the one that started it all!