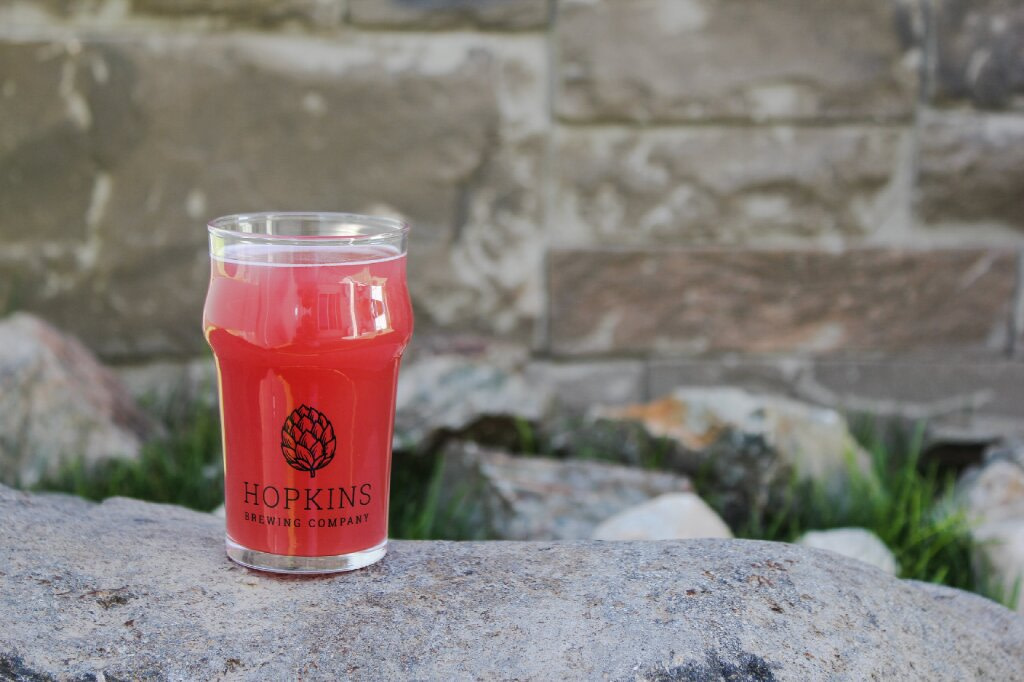 Beer of the Month: Raspberry Gose

By Chris and Sylvia Hollands
September 3, 2020

When Chad Hopkins, Owner and Brewer of Hopkins Brewing Company, opened his brewery, the location was the most fitting of all. “This is a business built on passion,” Hopkins says. “I was born and raised right here in Sugar House, so it’s been amazing … to be here, doing what I’m doing.” Not only did he find a place in an area near and dear to his heart, but the space also already happens to have a history in the craft beer business: This hyper-local brewpub is housed in the former location of Epic Brewing’s Sugar House brewpub.

The community-driven team at Hopkins is dedicated to creating interesting beer using locally sourced and sustainable products. While using such ingredients, many abstract ideas for beers have become a reality. “My team will put in requests for beers, and we try to make them all,” says Hopkins. As a result, one of this brewery’s most popular beers was born, the Raspberry Gose (pronounced GOH-zuh). This one seems like it must have been a tasty challenge to come up with the perfect recipe.

We picked up a couple of 32-ounce crowlers of Raspberry Gose and a cute, Hopkins-branded, nonic-pint beer glass. Cracking open the can, we poured it into our new cup. The beer rushed in, folding over itself in a solid-looking, pale pink/rose color. This formed a white, pink-tinted head of foam, which thinned quickly as it danced on top of the liquid. Hopkins intended to create an approachable sour beer. The first sign of this is in the nose, where we pick up fresh raspberry, then briny sea shore hovering in the background. “The combination of fruit, tartness and salinity creates an amazing sensation on the palate,” Hopkins says. This beer has a mild bite with tart berry flavors. This sour is balanced, which must come from the dried orange peel or fresh-ground coriander. “I was aiming for a perfect balance of raspberry tartness with the salt, and we nailed it on the first recipe and haven’t changed it since,” says Hopkins. It appears they have delivered what they set out to do in the approachability department. (In hindsight, the glass is a good and a bad thing. It’s pretty small, so you have to fill it up often to clear a crowler, but it feels like you are getting quite a few beers.)

We also grabbed a few other offerings from the brewery and have been impressed with the quality of beer. Hopkins Brewing Company is shaping up to be a creative brewery. As a result, you will see that their lineup on tap often rotates with new and unique offerings. However, this sour is likely to be around often—the Raspberry Gose quickly became a fan favorite and is now brewed regularly. Hopkins says, “This is our third time brewing this beer, since it is so popular.”

In a world where fruity seltzers seem to be the next popular thing, it would only make sense that we should have a bunch of super-tasty, fruited-sour gateway beers awaiting the seltzer lovers in the wings. One day, they will want to move to the next level of flavor and experience in beer, or so we think that’s how the story usually gose—er, goes.