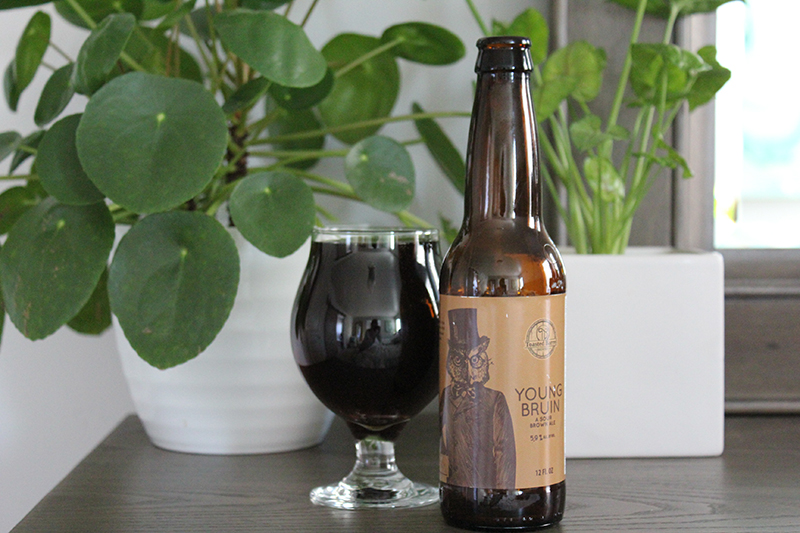 Beer of the Month: Young Bruin

By Chris and Sylvia Hollands
September 5, 2019

When the exciting news broke about a brewery opening in Salt Lake City that was planning to focus heavily on barrel-aging beer, we admit to having mixed opinions early on. We love a good barrel-aged stout or a well-aged sour as much as the next craft beer geek, but was this possibly a little too much too soon for the local beer scene to handle? While barrel-aging beers in Utah is not a new concept (several of our most prized local brews are right smack-dab in this category), it’s a bit of a seasonal or special occasion when some breweries throw something in a toasted barrel. Toasted Barrel Brewery entered the arena with no hesitation. Years from now, there is a good chance that TBB will be thought of as a pioneer in the state of Utah for taking on this ambitious load for our homegrown beer world.

Aging fine suds within the cozy confines of charred oak isn’t the only thing Toasted Barrel does. To keep customers happy and satiated while waiting out the process of finely tuning beers in their barrel-aging program, TBB introduced several brews with a much quicker turnaround time. One of these beers is Young Bruin, a kettle-soured brown ale. It is produced faster with the help of a stainless-steel mash tun and fermenter, instead of aging in wood. Traditional sours can take months or even years to produce, so this method can satisfy brewers and thirsty patrons while waiting for the goods. Young Bruin can be enjoyed year-round in the TBB taproom or by purchasing it from the brewery beer store.

Young Bruin is a bit of a twist on a popular style in the barrel-aging world, the Oud Bruin or Flanders Brown. We snagged a couple bottles, chilled them and popped the tops, pouring the brew into a tulip glass. Young Bruin pours with the color of deep amber and dark-garnet undertones. The carbonation released during decanting swarms across the top swiftly. A quick whiff of the brew signals smells of cherry, raisin and tartness for good measure. Tasting this brown ale pretty much mimics the nose, adding a sharp vinegar bite one would expect from this style. The crazy thing about this beer is there is no fruit in it at all. Young Bruin is a sour beer and may be on the next level if you are just getting into this style.

Toasted Barrel’s co-owners Lynn Litchfield and Sage Dawson also have some new brews in the works. Because Young Bruin is one of their most popular brews, they decided to create an intriguing variation with raspberries and vanilla, called Phineas. In addition, Litchfield says, “We will be releasing a bourbon-barrel-aged quad and also a tequila-barrel-aged lime gose, as well as a golden sour, re-fermented with local table grapes.”

Barrel-aged beers are super popular. Some of these beers elevate to what people consider “whale” status because they are hard to come by due to rarity and, frankly, the hoarding personalities many beer patrons have. The attitude of “buy one to enjoy now and buy six more to cellar” is not so uncommon these days. Toasted Barrel has a good thing going. We look forward to all their future offerings, and as the local community outside of the extreme beer-nerd group catch up, we will look back on TBB’s decision as a milestone in the Utah craft beer world.