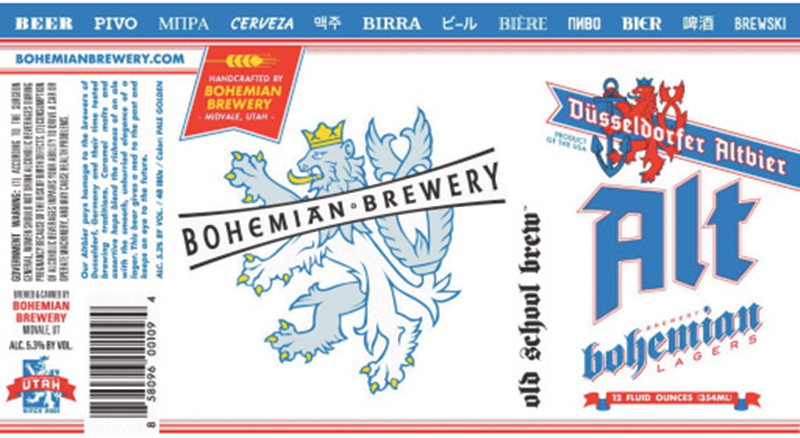 The Bohemian Brewing Company, located in Midvale, Utah, is one of the state’s most unlikely success stories in Utah’s recent beer history. Founded by Czech immigrant Joe Petras in 2001, Bohemian took a big chance on making old-world craft beer styles when the majority of craft beer drinkers were moving toward more hoppy and modern interpretations on English and Belgian styles. Joe’s philosophy was basically to make four beers, but make them well. This simple ideology served Joe well for over a decade. While other defunct breweries had previously occupied their space—making a full range of styles—these “Old School Brews” seemed to thrive where the others couldn’t. Sadly, Joe passed away in 2012, leaving Bohemian’s future in question. The Petras family, along with a dedicated staff, has successfully built upon Joe’s philosophy while keeping true to his intentions. This month’s beers are a tribute to Bohemian’s growth and innovation, as they released two new high-point beers into the market, keeping true to the old-world ways that have kept us coming back for more.

Export Lager
Brewery/Brand: Bohemian Brewing Co.
ABV: 6.0%
Serving Style: 12 oz. can
Description: This lager pours a nice, inviting, semi-clear golden hue with two fingers of thick, soapy white foam that, in turn, coats the glass with lacy foam as you drink it. The nose is full of biscuit and baked bread. There are some mineral notes mixed in with some mild grassy/floral hops that punch up from behind. The taste starts off bready with some toasty and grainy malt, just like the nose. Next comes a bit of saltine-cracker character that’s fairly drying. Hints of lemon and grassy, alfalfa-like hops round out the end. It finishes dry, clean and with mild notes of floral hops.
Overall: This is like your classic German-style lager, just amplified a bit. It’s a little more hearty, but every bit as drinkable as its lighter cousins.
Düsseldorfer Altbier
Brewery/Brand: Bohemian Brewing Co.
ABV: 5.3%
Serving Style: 12 oz. can
Description: This German-style brown ale pours a clear, reddish-brown color with a moderate cap of beige head. The nose has strong toasted-bread aromas with medium caramel sweetness. The hop bitterness is moderate with pine and grass notes rounding it out. The taste starts out with strong malt upfront, alongside toasty crackers as well as char and cocoa. Grassy and herbal hops pop in next with a hint of earthy cherry and biscuit. The end is floral with a slight mineral bite. It finishes somewhat dry and tingly.
Overall: This is an ale that’s aged like a lager. The flavor is complex compared to other brown ale styles, and it’s definitely worth getting your hands on.
Sommer Landbier
Brewery/Brand: Bohemian Brewing Co.
ABV: 4.0%
Serving Style: Draft
Description: This seasonal offering from Boho pours a hazy straw color, as it’s unfiltered to reflect the simplicity of styles with Bavarian origins. The nose is malty sweet with some toasty, raw grain notes. The taste starts with pale wheat bread and a bit of biscuit. Next comes a slight hint of roastiness, which balances nicely with the light barley flavors. The end is full of spicy, Hallertau hops that also add subtle floral notes with hints of lemongrass. The end is dry, spicy and bitter.
Overall: This beer was designed for summer by people who needed something simple and light in alcohol to get them though a day in the field.
Prost!
Photos: