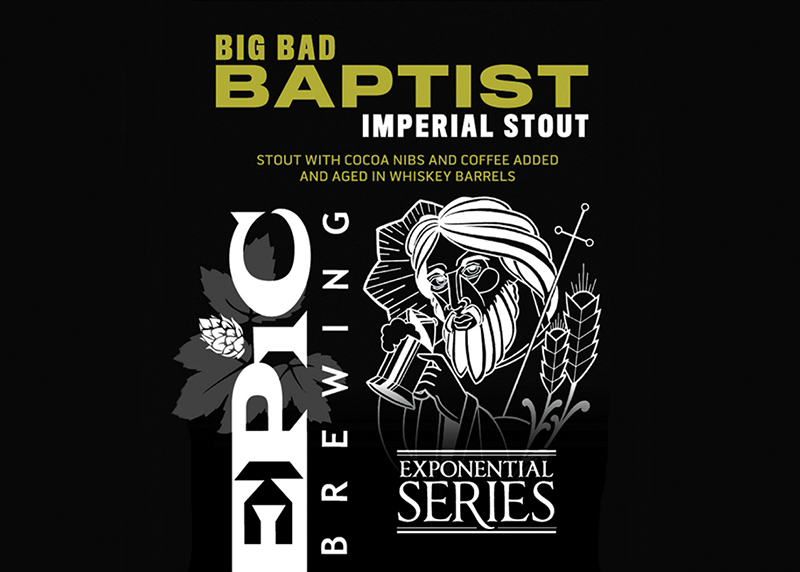 Every state has that special beer that they are known for. Our neighbors in Idaho claim Double Vision Doppelbock from Grand Teton Brewing as their best, while Vermont’s favorite is an IPA called Heady Topper from The Alchemist Brewery. To be fair, these are not unanimous choices—they are compiled from beer-geek databases and averaged out. The local champion that the beer-geek citizens of Utah have chosen as the mostest-bestest in Zion is Epic Brewing Company’s Big Bad Baptist Bourbon Barrel Aged Coffee Imperial Stout. If you think that name’s a mouthful, wait until you try the beer.

Description: This beast of a beer pours a viscous, pitch-black color with about one finger of thick, brass-colored foam on top. One of the signs of well-made beer is its head retention. This head is very slow in dissipating, which, in turn, leaves curtains of tan lace on the sides of the glass. Swirling the brew in the tulip-shaped glass shows a thickness to the brew, with some of the foamy lace clinging to the sides of the glass and slowly descending to the base.

The nose is a massive punch of coffee mixed with char and roasted malts. Before these aromas get too astringent, sweeter caramel and chocolate come to mingle, creating wonderful smells of a more woody nature as well as some boozy bourbon notes. The overall aromas are very rich and dark as they swirl around the brain.

The taste begins with huge roasted malts combined with a big wave of strong coffee more intense than was present in the nose. There is a lighter sweetness as well that plays to the strength of the massive amounts of malts used. This unleashes silky caramel and vanilla notes, which grow stronger and stronger as the taste moves on further to the end. While the sweetness asserts itself, the roasted malt flavors seem to dwindle but are replaced by more and more roasted coffee. As the end of the taste approaches, smooth bourbon and oak come mid-tongue, bringing a bit of alcohol burn and a minor amount of astringency. This sets up the tongue for a very pleasing finish of toffee and cocoa in the end. The Big Bad Baptist finishes semi-dry with a massively rich and boozy—but quite enjoyable—flavor that lingers on the tongue.

Overview: While this beer appears to be thick and crude, the body of the beer is actually in the medium to full range. If it were too thick, it’d taste muddled and overly rich. The big coffee and bourbon flavors of the beer seem natural and appropriate for what the base beer is offering. This made for a wonderful, slightly easy drinking beer (as easy as 12.3 percent can be). In the great realm of interweb bragging rights, Utahns can be proud that they’re represented by a beer that crushes the perceived Utah stereotypes while providing a rarely achieved orgasm for the tongue.