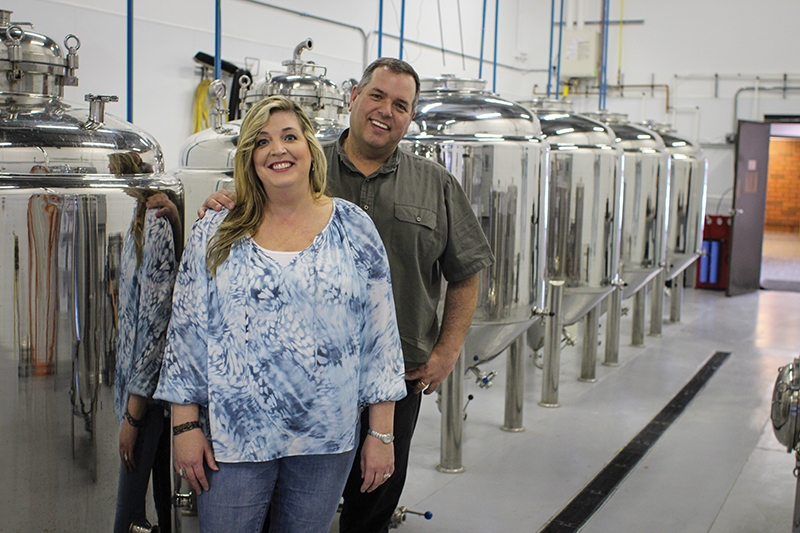 I love being a beer nerd. If you’re one, too, you definitely get that special something about the complexity of this simple beverage that snags unsuspecting people into its web. When the craft beer bug bites, it hits people in many different ways, and some people are more drastically affected than others. That’s basically the way that Utah’s newest brewery, 2 Row Brewing Company, came about. In a short five years, founder Brian Coleman went from a casual beer lover to a “beer baron.” Now we get to reap the benefits of his obsession.

Like many men and women, it starts out with chasing the perfect brew, then creating the perfect brew. “Credit or blame for the monster I’ve become goes to DeDe [Coleman],” Brian says of his wife. “She bought me a Mr. Beer Kit on a whim about five years ago, and it was all over after that.” Mr. Beer Kits are about as basic a homebrewing kit can get and are often the gateway for many home brewers. “I had no idea he’d take to it like he did,” DeDe says. “Within months, he’d outgrown that tiny Mr. Beer kit and moved on to five-gallon buckets.” Brian, as it turns out, had quite the gift for homebrew and the brewing process in general. Over the years, his homebrew setup became more complex until it occupied a good chunk of real estate in the Colemans’ garage. Brian says, “People I know—who I trust and [who] really like good beer—gave me a lot of good feedback on what I was making, and that drove me to get better and better.”
Last year at about this time, Brian was doing what so many homebrewers tend to do: looking at “beer porn” on the Internet. Brian had always held that image of having his own brewery in the back of his mind, but the big dollars of real life tended to keep that dream out of reach. Brian made the fortuitous “mistake” of looking at the “for sale” section in a beer industry website. There he came across a small and affordable yet professional brew system in Georgia. “Brian asked me to ‘Get over here and check this out!’” DeDe says. It was a small three-barrel fermenting system with four six-barrel fermenters. Brian made the call. He says, “I told the guy that we’d be booking the next flight to Georgia and to hold the system. I don’t think he thought I was serious,” Brian chuckles, “but after a little explaining, he began to understand that we were, in fact, coming.”
They met with the seller of the brew system, which was part of a brewpub that was still open for business and still making beer. After a little negotiating, they agreed on a price and finalized the deal. “The guy basically shut down the brewpub the next day, informing the staff of what had happened,” Brian says. “I felt a little bad for the employees, but my mind was already on the task of dumping all of the beer that was fermenting in the tanks and taking this whole thing apart, with no tools!” Well, they bought tools, drove three hours to find the only suitable rental truck, rented a crane and began dismantling and packing it all up, which took a couple of days. With about five tons of stainless steel, a mile of piping and a coolant system stuffed in the back of the truck, Brian hit the road, and DeDe flew home to get back to their kids. “It was a long trip,” Brian says, “rain, tornadoes, cheap hotels. It was actually kind of fun.” Upon returning to Salt Lake and unloading their big purchase into the garage, Brian said, “I guess we’re in the brewing business.”
After months of looking, the Colemans found the right place for the brewery, located at 6856 S. 300 W. in Midvale. Brian had always referred to his garage as the 2 Row Brewing, named for a type of barley used in brewing beer. “I saw no reason to change it, and I was surprised that no one else had used it already, so I went with it,” Brian says. Much of the last year has been the slow process of applying for permits to convert the building into a proper brewery. “I can’t believe how many people have offered up their time to help get things up and running,” Brian says. “It’s made the whole process easier and more enjoyable.” 2 Row Brewing is debuting with four beers, all of which will be above the standard 4-percent ABV Utah beers. Look for: 24K Golden Ale, a light but flavorful hopped 5.7-percent-ABV ale; The Accelerator IPA, an aggressively hopped American IPA, full of juicy and fruity bitterness at 7-percent ABV; Random Double IPA, the big brother to The Accelerator but with rotating hop combinations at 8.5-percent ABV; and Dangereux-Farmhouse Strong Ale, a 9-percent-ABV Americanized Saison with assertive hops and Belgian spiciness. All of 2 Row’s beer is in 12-oz. bottles and is available at the 2 Row’s brewery bottle shop and at better beer bars around the Wasatch Front. Due to the fact that these beers are small batch beers (three barrels per release) and Brian is concerned about their freshness, for the time being, they won’t be sold at DABC stores. “I just love making beer for people that love beer,” Brain says. “To see the looks on their faces—there’s no better feeling.”