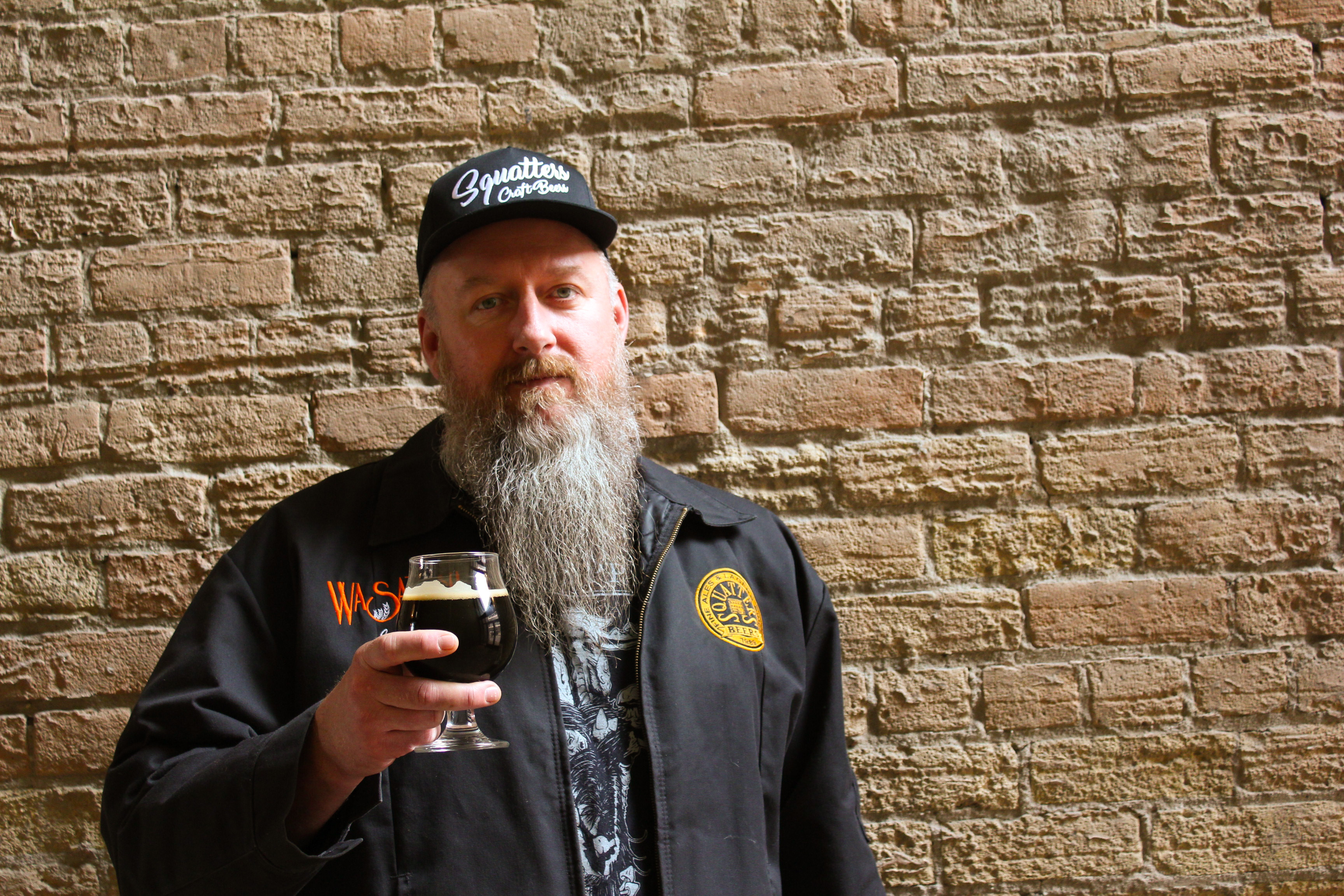 In the world of beer, there is something for everyone. Whether you like your beer to taste like fruit, coffee, citrus, Lucky Charms or you simply just want your beer to taste like, well, beer, you’re covered. Based on the official Beer Judge Certification Program Style Guidelines, there are over 30 main categories of beer and even more subcategories within each. We had the pleasure of spending some quality time with five head brewers from around the valley who specialize in some of the most popular beer styles that derive from around the world. It was enlightening to learn why these different beers are so important, as well as getting an understanding from the experts about what we should expect when we are enjoying them. Each of these masters were eager to open up about their favorite beer styles and tell why we need to get out and explore the many different beers out there. 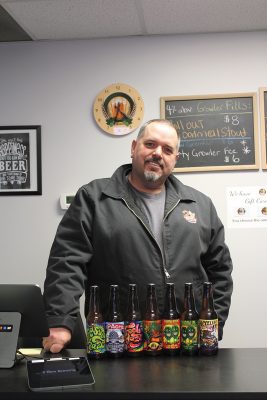 SLUG: What’s the history of the style?

Coleman: It was brewed with lots of hops because [the British] knew hops were anti-microbial—they were able to keep infection down … They brewed it stronger to put on the boat to their trip to India. … So when they got there, obviously, they tasted it in its form without watering it back down and decided they loved it that way.

SLUG: What can someone expect an IPA to taste like?

Coleman: Mostly hops. But once you get a refined palate for IPAs, flavors can vary quite a bit. You know—your herbal flavors, your fruitiness, your citrus. A good hazy beer will give you some of the malt flavors that are left over. In our beers, the haze is actually made from wheat. … In most good hazy beers you can taste that wheat behind the hops. The wheat comes out more than the barley. So, when you drink those, you can get a nice, wheat-y flavor from it if you’re paying attention to it closely.

SLUG: What do you do for your iteration of the “hazy” subcategory?

Coleman: The tough part with the hazy beers is getting the haze in suspension and having it last. … With our new process that we’ve discovered maybe six months ago … we’ve seen the haze actually stay up in suspension without shaking the bottle. We’ve seen that haze last well over seven months without completely dropping out. 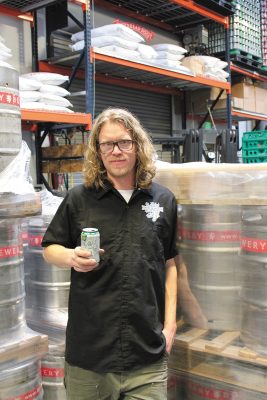 SLUG: Do you put your own twist on the Pilsner style?

Erickson: Our flagship [pilsner, the 1842 Czech Pilsener,] is kind of our take on a true, honest representation. … Then when we’ve done other batches. BrewSki is a beer that we have out right now, which is a great example of a German-style pilsner. [Original owner] Joe “Six-pack” [Petras] would say, “It’s just a pilsner,” but they are worlds apart if you appreciate the subtleties. A German pilsner is hoppier, dryer.
Czech pilsners have a softer hop impression because they use softer water, which is kind of what inspired the original Pilsener. So, even within pilsners, there are all different kinds of pilsners.

SLUG: What can someone expect a pilsner to taste like?

Erickson: A good Czech pilsner is a hoppy [lager] beer and perceived as not bitter. Like, you taste the bitterness—there’s a lot of bitterness, but it’s not harsh. … And then the lager yeast is another thing. What defines lagers and ales is the yeast they’re made with. … It’s not a ton of yeast character, or very little character. That puts the focus on the malt and the hops.

SLUG: What can someone expect a pilsner to smell like?

Erickson: The aroma is very clean and clear. The Czech Pilsner is defined by that Saaz hop. A lot of people pick up black pepper, but to me it’s a very herbal, grassy-type hop. Saaz hops are pretty well defined. 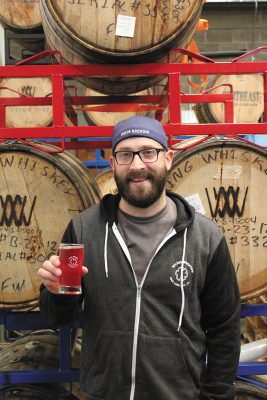 SLUG: What can someone expect a sour to taste like?

Turnbow: I’m looking for you to know that it’s a fruited sour, so I definitely want that fruit to pop. A lot of times, sour can be overwhelming, where you drink it and all you taste is just a shock to your palate … The idea for me is balance. … I’m making this as a fruited sour beer, and I would like you not to only be able to taste the fruit, but have it shine.

SLUG: Do you put your own twist on the sour style?

Turnbow: We are definitely doing more of the Americanized-style sour beers here. We’re doing kettle sours, nothing that is crazy-long barrel-aged stuff like the traditional European styles. Even our Berliner Weisse, we’re not doing a traditional Berliner Weisse with a sour mash, but we’re doing more of the Americanized version where we are just leaving things in the kettle with Lactobacillus [yeast] culture for 48 hours.

Turnbow: I’m sure that the history of sour beer goes for all—honestly, I’m sure that beer made in Mesopotamia was sour. I don’t imagine they had great control just getting brewer’s yeast. But to me, historical sour beers starts with Lambic. Cantillon, to me, are the people that, they are the originators, in my opinion … So to me, it’s the Brussels-area people that are making true, spontaneous, Lambic-style beers. 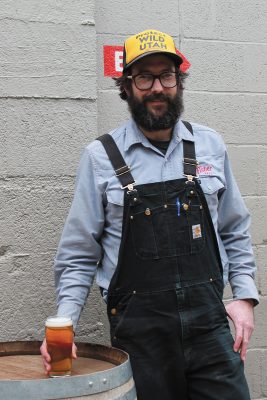 SLUG: What can someone expect a cream ale to taste like?

Frazier: Usually, they’re light and easy-drinking beers. Some are on nitro. I like a nitro cream ale, too.

Frazier: As far as the history of cream ale, I mean, I think there are examples in Europe—Sam Smith Cream Ale. There are some older examples of the style that maybe come to mind, but around town or in American craft brewing, I think you see a pretty wide variety of what could constitute a cream ale.

SLUG: Do you put your own twist on the cream ale style?

Frazier: It’s the rye, really. We use probably 25 percent rye, actual grain. … It’s a light-bodied ale. We fine it—I don’t have a filter, but it appears to be filtered. It’s nice and bright, and it has a kind of a robust, grainy spiciness from the rye. Ours is easy to drink and light—really crisp—and your pilsner drinker can have that when he is sick of drinkin’ my pilsner. … It really does have a distinct rye flavor. It kind of a rich, grain, straight-from-the-field flavor.

SLUG: What is the best way to enjoy it?

Frazier: Aw, man. Ice, ice fuckin’ cold. Any kind of glass you wanna put it in, on a summer day. It’s a lawnmower beer. 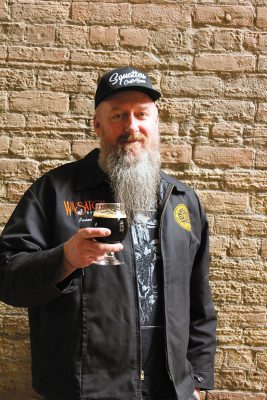 SLUG: Why do you love stouts?

Stock: I think mostly the complexity of the flavors. I like that it’s a little misunderstood, too. I don’t know why that appeals to me. I mean, I’m kind of a metal head, so it’s seen as dark and strong.

SLUG: What can someone expect a stout to taste like?

Stock: Stout is an interesting style in that there are lot of subcategories. So, a dry Irish Stout is going to lean more roasty … [and] should have a little hint of sourness to it. … Milk stouts are typically sweeter. … I find Russian imperial stouts [such as Outer Darkness] probably a personal favorite … With Squatters, we always have Captain Bastards—that’s one of our stouts that’s been around longer than I have, so I can’t take any credit for it—but we still brew Captain Bastards, and I think it’s a great example—kind of middle-of-the-road American-style stout. … It’s a really cool style to play around with because I think it lends itself to a lot of flavor additions—fruits or coffees work well in it.

SLUG: Do you put your own twist on the
stout style?

Stock: I’m kind of a traditionalist when it comes to brewing, honestly, for the most part. My mentor, Jenny Talley, really engrained the respect of beer styles into me, and I’m grateful for that. … We do play around with the style as far as adding fruit or coffee, things like that—or barrel aging.

There is so much we can learn about the variety of beer in these classic styles, but this is only the tip of the iceberg. As head brewers get creative and the people speak with their dollars, new styles are being created, defined and eventually recognized as another official beer style. Thanks again to Brian Coleman, Brian Erickson, Colby Frazier, Clay Turnbow and Jason Stock.  Cheers!

More on SLUGMag.com:
Beer of the Month: Chasing Haze
The Night Shift