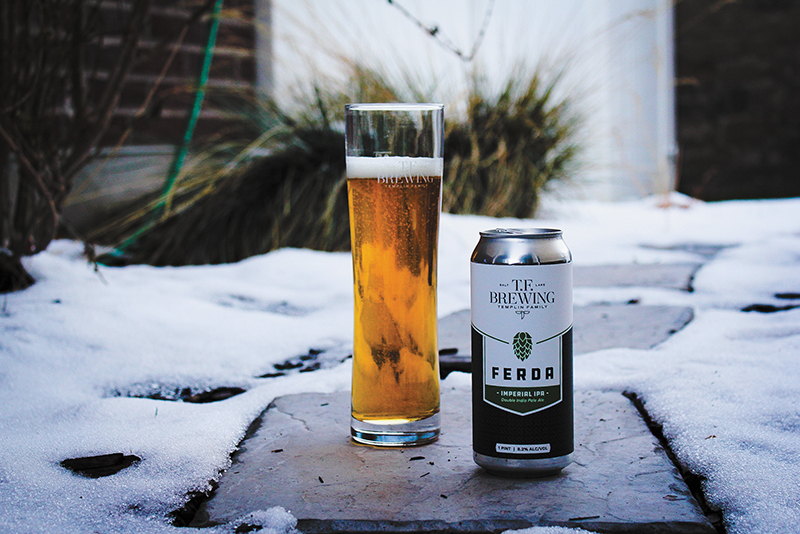 Beer of the Month: Ferda

By Chris and Sylvia Hollands
January 3, 2019

Guess who’s back? After short time away, Kevin Templin, former head brewer of Red Rock Brewing Co., once again successfully immersed himself into the Salt Lake City brewing scene. Although, Kevin and wife Britt Templin weren’t just taking a vacation from the beer world, a life they have known for well over two decades. They were putting forth fantastic effort that they’ve brought to the booming Granary District, another must-visit location for adult beverages. Launched this past October, Templin Family Brewing hit the ground running. The amount of detail put into the project is remarkable, and even more so how quickly it appeared to come together. Though T.F. Brewing will be focusing heavily on lager beer, every aspect of the operation looks to be seamlessly thought out, including the first canned beer, a big Double India Pale Ale. T.F. Brewing features a modern space, diverse food trucks, a variety of beer, and even the glassware selection hits the mark. All proof that Templin’s true grit prevails, producing a selection beyond the assortment of wholesome lagers is the Imperial India Pale Ale, Ferda.

Description: A tall 16-oz. aluminum can showcases Ferda’s sleek label design with the classy moniker T. F. Brewing. The proper glassware is a slam dunk. It is slender yet large enough to fit every drop of goodness. Cracking the can, a liquid surge of bright-copper haze consumes the big drinking vessel. The bubbling froth forming at the top is clean, white and initially thick, protecting the treasure below. First whiffs of this Double IPA present hints of classic West Coast IPA flavors and citrus. Ferda’s mouthfeel is crisp and sharp while delivering a precise display of hops and sweetness. With balance from the tropical hops, the finish presents hints of fresh grass and slight yet welcome bitterness. For a super-hoppy beer, it’s well crafted and hides the alcohol well. This is a beer well-suited to start out the night or to close it down.

T.F. Brewing offers a heavy selection of exceptional lagers, proving that Kevin wants to do what he loves and to love what he’s doing. With a personal affinity for German beer styles, Kevin sought to open a place mimicking the traditional family breweries he is so fond of. We have found many brewers clearly united in their love for a good lager and the amount of care it takes to get them right. Unlike a hoppy beer, there is little to hide behind in a clean German-style beer. Yet, another common sentiment among the brewing community is that the IPA is king, so it makes sense to ensure that one is available as casual patrons pass on through.

Head brewers have admitted that recipes aren’t always dialed in when working with a brand-new system. It could take a few batches to get accustomed. It’s Templin’s dedication to perfection that allowed the first batches of Ferda to shine so early on. We are sure that he is always working to make each beer the best it can be because he has always been a perfectionist in this aspect. Templin Family Brewery is meant to be a place to visit and enjoy the environment, people and beer. Though Kevin once told us the next big thing in beer was “the German pilsner,” he will make sure that his family brewery has something for everyone. If history is on Kevin’s side, Ferda will become a staple offering—much like another popular local Double IPA that Templin had his hand in during his previous gig, Red Rock’s Elephino.