SLUG Mag Soundwaves
Episode #395 – Cotes
00:00 / 18:06
Spotify Stitcher
RSS Feed
Share
Link
Embed
The idea for The Hive Winery originated when Jay and Lori Yahne, who both work as engineers, began experiencing difficulties with the recent economic crash. The Yahnes had been home brewing for around 15 years, so starting a business focused on brewing seemed natural. In addition to using local honey and fruit in their production, The Hive also sells a few local honeys and fruit spreads at their site in Layton.

Finding the Drink of the Gods: The Hive Winery and Mead 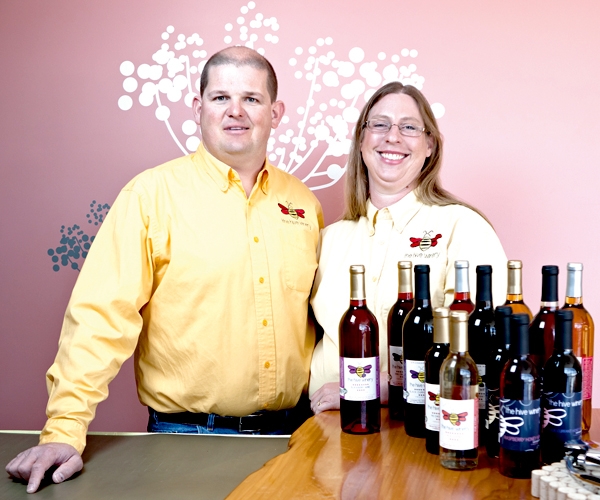 Variations of mead have been around for over 9,000 years, though there are plenty who believe that, because mead doesn’t require any cultivated grains in order to be produced, the origin of mead could predate that of any beer. Regardless of which came first, mead production has clearly had an influence on the development of beer. One just has to look at some of the varieties of mead that have been around for centuries—like metheglin, which is mead mixed with herbs or spices, or melomel, a mead prepared with fruit—to see techniques that have been mimicked in various stouts, ales and hefeweizens. Of course, the most important aspect of any mead is honey, because, in the simplest terms, mead is created through the fermentation of honey and water. Mead is even referred to as “honey wine,” which makes the Beehive State the perfect place to create the perfect mead.

The idea for The Hive Winery originated when Jay and Lori Yahne, who both work as engineers, began experiencing difficulties with the recent economic crash. The Yahnes had been home brewing for around 15 years, so starting a business focused on brewing seemed natural. “Lori came up with [the idea]. She planted it in my head, saying, ‘Hey, if we start a winery, maybe we can take a vacation,’” says Jay. “She kind of left it at that, but then, two weeks later, I came back with a little bit of a business plan. As ideas kept growing and expanding, it was like, ‘Maybe we can make this a full-time living.’” With that, Jay and Lori officially opened their doors last June. In addition to using local honey and fruit in their production, The Hive also sells a few local honeys and fruit spreads at their site in Layton.

Around the world, mead is still quite popular in terms of production, while here in the US, it is less common. Jay believes this may have resulted from the way Prohibition affected smaller alcohol manufacturing markets, but mead has also been affected by the controlling nature of the grape wine industry. In fact, Jay says, “There are certain states where you can’t make anything but grape-style wines.” That’s right, there are restrictions on liquor in other states that the Utah legislature has yet to throw at us.

With variations of mead even fewer and harder to come by here in Utah, we’re lucky to have a place like The Hive that produces mead locally … and they don’t just brew it locally, they use local ingredients as often as possible. “I don’t feel it’s right to go outside the state if you don’t have to. I want to support local farmers and keep it local. I pay a lot more for my local raspberries [used in both the Raspberry Honey Wine and the Raspberry Wine], and they’re worth it to me. They have a much higher flavor, and they’re just a better all-around raspberry. I try to keep it as local as I can, and also try to recycle and try to keep it within America,” says Jay. The honey for their mead, of which they’ve gone through over 3,000 lbs. worth this year alone, comes from Cox Honeyland of Utah—a beekeeping/honey-producing company who began their business over 100 years ago in St. George, but have been operating in Cache Valley for about the last 70. Having a good local supply of honey was one main reason they decided to add mead into their inventory. Mead production at The Hive is broken up with the four seasons, with flavors ranging from dry in the winter to sweet in the fall, as the flavor of the honey changes throughout the year. Aside from the seasonal meads, their Black Currant Honey Wine, a fruit melomel, is easily a fan favorite. The alcoholic content of The Hive’s mead averages between 12–15 percent, which could be reason enough for all the Utah beer drinkers to switch over.

As you might have guessed from their name, The Hive Winery also produces a number of wines, but not quite the wines you might be used to. Since grapes don’t grow well here in Utah, Jay and Lori decided to focus their wine production on fruit wines, using as much locally grown fruit as possible. Most batch sizes are fairly small, with production ranging between 50 to 1500 bottles, but the Yahnes believe this will increase as their meads and wines become more popular. The Hive’s unique use of local supplies from local businesses creates an end product that is particularly representative of Utah and incredibly delicious.

Swing by The Hive Winery Monday through Saturday from 1:30-6:30 p.m. for a tasting or to buy some mead. You can also find them online at thehivewinery.com or on Facebook at facebook.com/hivewinery.