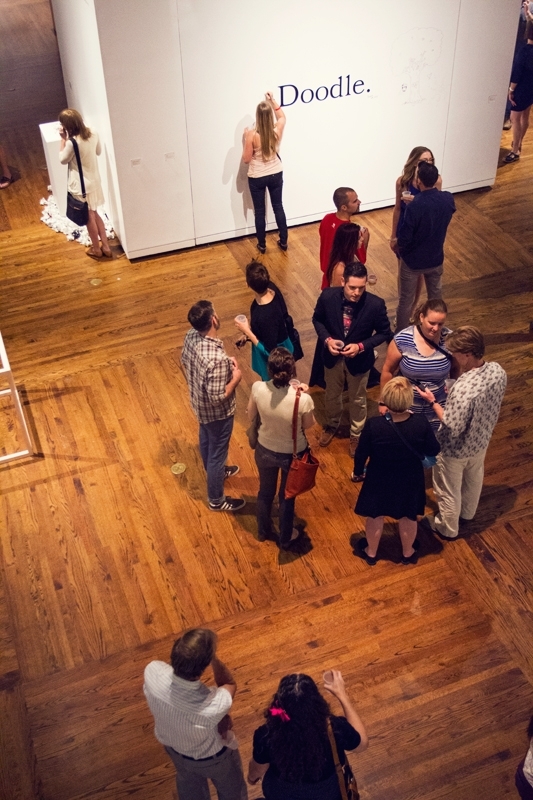 People converse next to the doodle wall, one of the do it exhibits’ interactive pieces. Photo: Talyn Sherer

When your editor calls you up and asks if you want to drink local craft beers and look at contemporary art, the first answer is “hell yes!” immediately followed by the question, “we can do that in Utah?” I would expect this sort of event in Boulder, Colorado but I had never heard of such an event in Utah. That’s exactly what Phil Handke president of the Utah Brewers’ Guild thought. Beer and arts parings were offered at the National Craft Brewers Conference first in Washington, D.C. in 2013 and then this year in Denver. Handke loved the idea and decided it was time to bring this concept home to Utah. Seven local breweries participated in Fluid Art a night of beer and art pairings at UMOCA. As a beer and art lover, it was a match made in heaven!

Epic Brewery started out my evening. They chose to pair their Santa Cruz Brown Ale with the Boarders and Migrations exhibit in the Street Level Gallery. The exhibit features work depicting the unique nature of the U.S. / Mexican boarder and the large role it plays both socially and politically. The show really digs into the personality of the boarder, its aesthetics and international symbolism. The particular piece Epic selected comes from artists Jorge Rojas and Diego Aguirre entitled US-Mexican In-Dependence Flag. Epic Spokesman Phil Handke liked the merging of the two flag and compares it to the merging the dark chocolate malt and the Pacific Northwest hops that creates the tasty Santa Cruz Brown Ale.

In the New Genres gallery we celebrate the red planet with Red Rock’s Imperial Red Ale. This 9.5 % beer has a bold hoppy front end with a smooth malty finish, not so much like the red planet, but it’s all about interpretation with Melik Ohanian’s Welcome to Hanksville exhibit, as he uses the Utah desert as a precursor for Mars exploration.

Several breweries selected works from the Do it exhibit in the Main Gallery. This exhibit pays homage to the DIY sector and the makers of the work, which of course must include the craft beer makers. The idea behind the do it came from Hans Ulrich Obrist, who solicited 12 artists to make works and descriptions on how to recreate them. The work would live on in an instructional binder sent to galleries all over the world, and each piece would be recreated by someone new, using the same instruction. The results could be likened to a cookbook, same recipe but slightly different results based on person following the instructions.

Paired with the Wishing Tree, a concept contributed by Yoko Ono and donated by Cactus and Tropicals, we find the Shades of Pale Ale Brewing company and their Publican Pale Ale. A Publican is also known as a Saloon Keeper, the person who keeps all your dark secrets, hopes and wishes.

Bohemian Brewery brought their Viennese Larger. Don’t let the aluminum can fool you, this beer has a smooth and refined taste with the original roots dating back to Vienna Austria in the 1840s. This true lineage was the inspiration for the pairing with The Black Wavy Line, the center of a wall piece with alternating blue, red and yellow lines and customized to recreate the topography of the Wasatch front.

In a light and happy Belgian living room sits the perfect dinning room table until … wreckage is everywhere, tables turned over, a cow skull sits. What happened, how did we get here? The pristine white living room is likened to Wasatch Brewery’s White Label Belgian Style White Ale, which presents itself as pristine and clean but with a little mischief brewing. Look for hints or coriander and orange with low hops and lite citrus taste.

All the sweet things from your childhood sitting in a single room, how can you not feel nostalgic and instantly at home. Allison Knowles pays homage to her childhood in the piece Each Red Thing. Squatters Brewery recreates that feeling in every bottle of their Bumper Crop Honey Ale, made with local lavender and honey from Cache Valley. A favorite of the evening and perfect for summer nights this beer is mild with a slightly sweet finish.

Finishing out my tour in the Project Gallery, I found Desert Edge Brewery and their Courtney Maries Kolsch, a crisp pale ale that begs for more discovery, which is what drew the brewery to the work of Charles Callis. Charles work for UMOCA’s local artist spotlight is very detailed and intricate and begs the viewer to come closer to get the full story.

I hope to see events like this popping up at every art gallery in Salt Lake City.