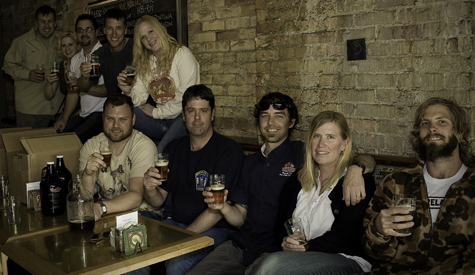 Jump for joy, hallelujah and praise the Lord.  Home brewing is now a legal pastime in Utah. I’m betting (which is not a legal pastime in Utah) that just because home brewing is now legal, homebrew is not going taste any better than it did before the law was changed, which was not very good in my humble opinion.  In fact, I firmly believe that good old illegal homebrew will probably taste better than the new and improved legal stuff.  Home brewing was more exciting when it was illegal.  It had that secret ingredient of risk that seemed to enhance all the good flavors and slightly mask all the bad ones.  The thrill of getting away with mixing up a batch of flat, sour, nasty tasting “brew” when it was against the law somehow made it taste better.  It was sort of a rebellious hobby then.  Now it just doesn’t seem to have that edge-of-your-seat excitement.  You know the thought in the back of your mind while boiling away your brew in the kitchen that, at any minute, the beer police would come swooping down in their black helicopters, smash through your windows, and throw your bootlegging ass in the slammer?  That nervous, intense paranoia of getting busted really seemed to be the secret ingredient in homebrew that somehow made it taste palatable.   Now that it’s legal, it seems like, well, just mixing up a batch of beer-flavored Jell-O for the company picnic (If somebody ever makes such a flavor, I’ll definitely start eating Jell-O again!).  In my opinion, the last few batches of home brew that acquaintances have forced, I mean, let me taste, have been the worst ever.  I’m going to start a new slogan or two—“I like illegal homebrew” or, “illegal homebrew is better.”  How about, “legal homebrew is for wussies?”

That brings me to my main point about brewing.  Let the pros do it.  Several of Utah’s great craft breweries have collaborated on a special beer called HB51, named after the bill that legalized home brewing.  This delicious collaboration ale is an amber colored, American-style pale ale that can be found at Red Rock, Hoppers, Desert Edge, the Brewers Co-op and Squatters Brewpub.  It is currently available only on draft at the above locations.  Who knows, if it has strong sales, it could be bottled and sold at local grocery stores around the state.  All of these breweries were allowed to enhance the basic recipe any way they desired.  This means that the several variations of HB51 Ale will taste different at each brewery.  See if you can detect each of their signature flavors.  That is, every brewery has a distinctive characteristic all their own.  Many beer drinkers can tell a brewery’s product brand without having to look at the label.  So go try this “homebrew” at each of Utah’s participating breweries and see if you can taste the difference between each variation and see if that difference matches the brewery’s signature style. Don’t you wish all your homework was this fun?

Now don’t get me wrong, I love home brewing.  It’s how I got started in the brewing business and I’m confident in saying that that’s how most commercial brewers get their start. I strongly recommend that if you enjoy drinking good beer and plan on trying to make a career out of it, you start home brewing immediately. The best and only way, in my opinion, to learn a new trade is to get out there and do it.  Just remember, however, that it’s now perfectly legal to brew beer in your home.  That heart pumping anxiety of hearing explosions in your basement (because you thought you’d make your homebrew extra strong by adding extra sugar to the bottles) and thinking it’s the beer police coming to get you, will be gone.  From now on, it’s just going to be a plain, old, boring, legal mess to clean up.  If America’s alcohol policy continues to be shaped and written by prohibitionist groups like Mothers Against Drunk Driving (MADD), homebrew might be the only alcohol available to any of us in this country very soon.

Description: This filtered version of the HB51 pours off the tap crystal clear, a deep orange honey color with an off-white head that leaves behind some mild lacing. Off the nose there is a light amount of hop character and a mild, bready backing. Off the tongue there is quite a bit of bread in the mouth followed by a decent hop pinch that finishes with a dry, bready, caramel malt.

Overview: Next to Desert Edge’s version of this beer, I found this one to be the standard to rate all the other ones off of. The one thing that did make this stand out a bit more than the others was the refined floral aroma of the hops.

Description: Squatters’ version hits the pint an average orange color with a tawny yellow hue and an average amount of head and lacing. The aroma leads you right into politely pungent floral hop character with just a hint of orange citrus, all backed up by some light malt. The hops manage to make themselves a bit more present in the taste, which all leads into a dry finish with a touch of malt.

Overview: Now this is a pint that I wouldn’t mind ordering with my meal. The Amarillo hop character that came off its aroma thanks to the hopback that Jenny at Squatters decided to run it through made it pleasantly light to drink, but still maintained a nice hop nose.

Description: Unfiltered, this guy eases its way into your pint a hazy orange with an off-tan head that leaves some “sticky-as-a-sum-bitch” lacing around the rim. The aroma is a dominantly bread malt with a light kiss of floral hop. This light drinker pulls off some flavors of caramel, sweet dextrine malt, and touch of some herbal hops.

Overview: Nothing bad here. This was one that I could look to as an easy sessionable drink. Hopefully when this issue is in print you can catch this beer right where/how it deserves to be served … on cask!

Description: Pouring into the pint, this brew is a hazy orange but still mildly translucent with a tan head that leaves a bit of foam. The aroma is something to be studied: There is just the right amount of oak, a strong orange fruit aroma and a pinch of some caramel malt. The flavor is nothing short of the aroma—there is some fruity yeast right off the get-go followed up by some bready malt and hops that is all finished off by some oaky dryness.

Overview: There is absolutely nothing negative for me to say here. My only problem is that Donovan (Head Brewer for Hoppers) will not keep this on tap much longer. The oaky character mixed with whatever European-based yeast strain, made this one of the most complex HB51 beers that I sampled. Finding the oak was a little rough at first, but when you find it, the beer is all the better for it.

Variable: A shit-ton of hops

Description: Off the pour, this brew from the guys at Wasatch is a simple, light amber color with an average head. The nose is … hops, a little more hops and then just a pinch of hops. Oh yeah, and then there is a bit of malt. The taste is dominantly floral hopped with notes of citrus and some herbal hop kick that still maintains some malt character with a dry finish.

Overview: I think that the guys up at Wasatch must have been confused when they were told to brew an amber, because they shot for a pale ale. As a “hop head,” I had no problem with this guy—I actually drank this one faster than all the others. It was a killer variation to the recipe they were given. Cheers!