00:00 / 16:39
Spotify Stitcher
RSS Feed
Share
Link
Embed
Since the craft beer boom of the early ’90s, the package of choice for breweries was the good old brown bottle. For too long, people had complained that the tried and true can was making their favorite beverage taste like metal, and the new craft movement wanted no part of that. So, the can was resigned to become the bastard child of the beer world until one innovation came along—the plastic-lined can. 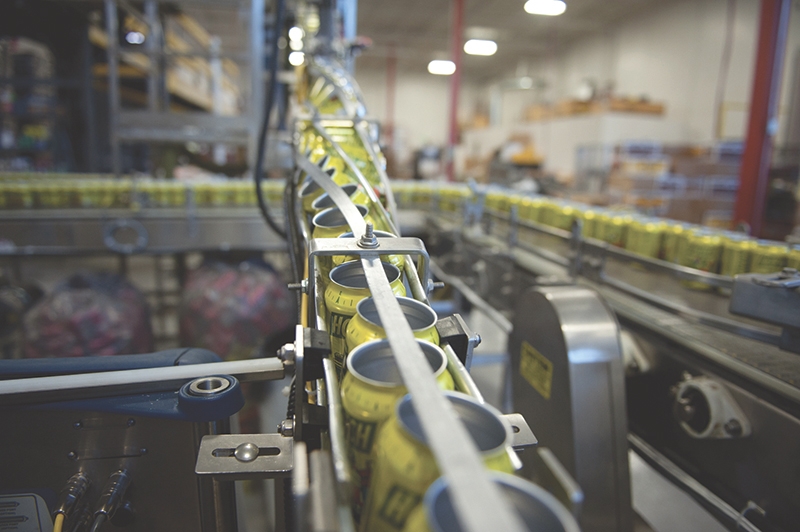 Empty cans of Uinta Hop Notch IPA make their way down the line to be filled. Photo: Russel Daniels

Back in 1935, the world of beer was being reborn in the United States. Just two years previous, you couldn’t legally buy a beer. That goddamn Volstead Act (which enforced national Prohibition) was the law of the land—any beer swilled at that time was most likely being made in your bathtub or something equally attractive. Don’t get me wrong, people were happy to have it, but they were yearning for the days of professionally crafted beer.

Once the Volstead Act was gone and the 21st Amendment was a reality, America was once again a beer nation. During their long hiatus, the beer companies weren’t just sitting on their hands waiting to fire up their brew kettles: They were busy trying to come up with a way to conquer the thirsty world that awaited them.
Anheuser-Busch, Schlitz and Pabst experimented with canning “near beer,” but weren’t very successful until Krueger Brewing of Newark, NJ debuted the first cans in 1935.
Since then, billions of cans have been made, filled and have become the base for many frat-party kitchen fortresses.
Since the craft beer boom of the early ’90s, the package of choice for breweries was the good old brown bottle. For too long, people had complained that the tried and true can was making their favorite beverage taste like metal, and the new craft movement wanted no part of that. So, the can was resigned to become the bastard child of the beer world until one innovation came along—the plastic-lined can.
Suddenly, our favorite beverage vessel was a real option again, and many craft brewers wanted it in their lineup. Uinta Brewing recently embraced the can as part of their new “rebranding” project. We spoke to Steve Kuftinec, VP of Sales at Uinta, to find out why cans were a good fit now. “Cans have been in the works at Uinta for the last couple of years,” Kuftinec says. “We just never had the room for a canning line. Now that we do, we can pursue a different market that we’ve always had our eye on.”
There is still that stigma out there that’s attached to cans. How does a long-established brewery overcome that? “It wasn’t an easy decision to arrive at,” says Kuftinec. “Cans were perceived as [a] less expensive, ‘cheaper’ product, but what really legitimized it for us was seeing large brands like Sierra Nevada and New Belgium starting to embrace cans. We felt better about making that decision seeing the success that these noteworthy breweries had achieved with cans.”
People are stubborn—they don’t like change, but Kuftinec says this new packaging has not affected sales on Uinta’s already strong line of bottled beers. “We haven’t seen any drop in our bottle sales. It’s not like there’s this huge cannibalization happening where people are switching from bottles to cans—people are drinking Uinta in cans. I don’t know what they were drinking before, but they seem to be embracing our cans,” he says.
But what about the taste? There have to be plenty of people out there that say there is a difference between the beer in a bottle versus in a can. Kuftinec says, “The cans have been very consistent. We’ve gone to great length to keep things like ‘dissolve oxygen levels’ to ‘CO2 levels’ consistent to our bottled products.”
Utahns are notoriously outdoorsy people, and cans seem to fit in nicely here. Kuftinec agrees that they’re a great match for our local lifestyle. “Uinta has been very fortunate to have strong support from outdoor enthusiasts such as campers, rafters, bikers and skiers. This type of package works better for active lifestyles—it’s easier to pack in and pack out. That was one of the major forces driving us to cans,” he says.
Uinta may have to make a choice here in the coming days, though. The state of Utah is giving them a single option in regard to their Hop Notch IPA. “You can sell it in bottles or cans, but not both,” Kuftinec says, quoting what they were told by the DABC. They’re not giving Uinta a reason for their decision, which is frustrating for the Uinta crew, as Kuftinec pointed out that Sierra Nevada Brewing sells both bottles and cans in state stores. If this is going to be the case, what would you prefer? Uinta would like to hear from you, so visit their website, uintabrewing.com, and voice your opinion.
I should point out that Uinta isn’t the first brewery to embrace cans. Bohemian and Moab Breweries have long been in cans, and the Utah Brewers Cooperative, makers of Squatters and Wasatch beers, is purchasing a canning line soon. Uinta’s cans are available in damn near every grocery and convenience store in the state. Look for Cutthroat, Baba, Wyld and Sum’r. Hop Notch, for now, is only available in bottles. Love ’em or hate ’em, craft cans are here to stay.
Photos: