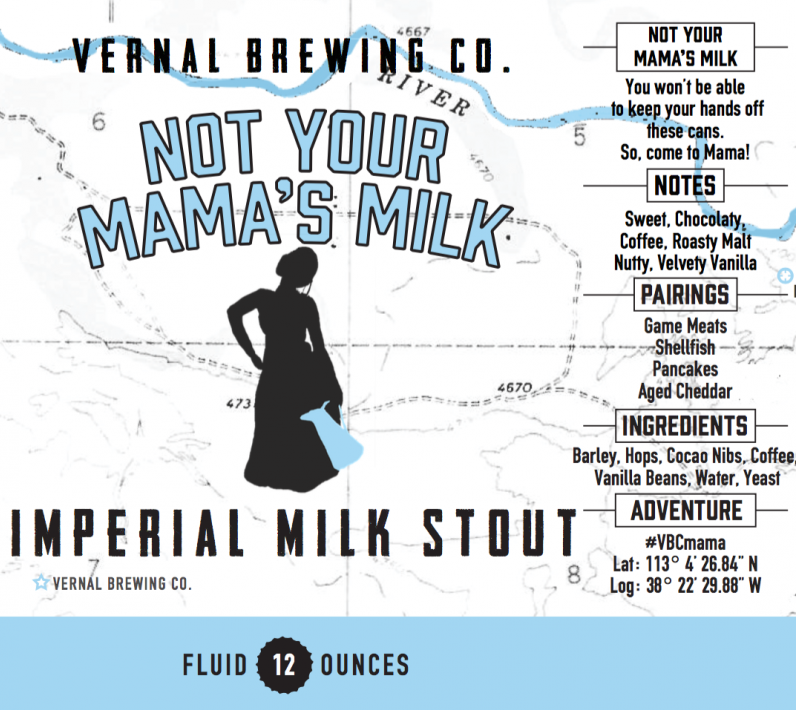 Beer of the Month: Not Your Mama’s Milk Imperial Milk Stout

Description: Milk in a stout? Well, yeah, sort of. This isn’t a cocktail or a trendy shooter. Milk Stouts, or “sweet stouts,” are a true beer style that are a relatively new beer phenomenon in the beer world. They have been around for about a century or so, and in case you’re keeping score, that’s a short amount of time in beer years. The reason they’re relatively new is due to the sweetening technique used. When brewing beer, sugars extracted from the malts are the key to fermentation. The amount of sugars present in the wort (unfermented beer) affect alcohol content and how the beer will taste. Adding too much sugar can actually dry out the taste of beer because most of the sugars are converted into alcohol, making them boozy and dry. If you sweeten after fermentation, you risk post-fermentation in the bottle or the keg, which creates high levels of CO2 gas that can make beer containers explode. When late 19th Century brewers discovered that lactic sugars were not fermentable, that changed the sweetening game. Not only did these unfermentable sugars give the brews more sweetness, but they also added body without creating more alcohol than desired. Vernal Brewing Company’s Not Your Mama’s Milk Imperial Milk Stout is a great example of Milk Stout that takes advantage of what the stout and lactose have to offer.

Poured from a 12-ounce can, this beer slowly gurgles out like oil seeping from an old engine block. This black, viscous liquid immediately begins coating the sides of the glass, creating an opaque base for the dense, latte-colored head to perch upon.

From a foot away, the nose punches out with some big, crème brûlée aromas. There’s a beautiful blend of caramelized and slightly burnt brown sugar and an almost dominating vanilla thump coming from beneath. If you keep your sniffer in there long enough, you also get a creamy, milky aroma of marshmallow that gives way to a slight, bitter cocoa. The aroma is amazing—spend a few extra moments taking it in.

Upon first hitting the tongue, there are nice custard flavors with heavy cream and more of the sweet crème brûlée from the nose. At this point, the malt from the actual beer begins to show itself, providing caramel and nuttiness with some assertive, roast-espresso flavors. The vanilla continues to assert itself throughout without dominating as it did in the nose. As the beer begins to warm, the stout begins to reveal itself with notes of bitter chocolate, toffee, red berries and roasted malts that tie this beer together and really round out the back end.

In the mouth, the carbonation feels light and creamy, which adds to the milkshake character of the beer. The body is on the high side of medium. The beer’s 8.5-percent ABV is well hidden, which makes this beer dangerous, as you tend to forget that this is in fact a beer and not a caramel macchiato.

Overview: I may be a little biased with regard to the taste of this beer. These types of flavors tend to put Mikey in his happy place. Some of you may find that the milk sugars could be overwhelming the base beer. As the name states, this is Not Your Mama’s Milk Stout. It is unapologetic in what it is: a beverage that blurs the line between beer and confection. Not Your Mama’s Milk is just beginning to find its way into the market. It’s currently stocked in its home base at Vernal Brewing Company (55 S. 500 E., Vernal, Utah). It is also nearing its debut in DABC stores very soon. Seek it out when you can and please share your thoughts. We’d love to hear from you!