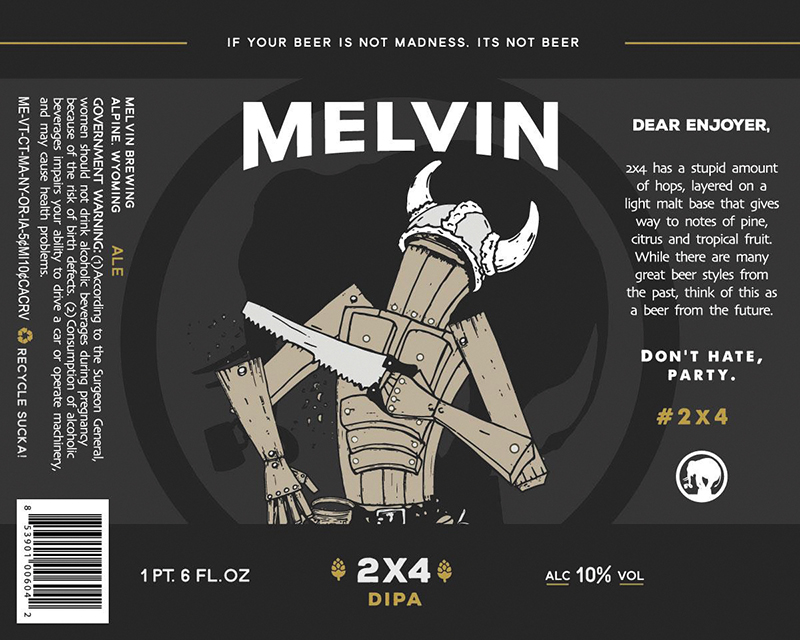 About five years ago while attending the Great American Beer Festival in Denver, Colorado, I came upon a small, unaffiliated beer competition that was all about IPAs—the hoppiest of all IPAs, to be exact. It was called the Alpha King Challenge. Its main purpose was to find and crown the biggest and baddest India Pale Ale in the country. The winner of this monster beer competition turned out to be from a tiny brewpub in Jackson Hole, Wyoming, which also had a Thai kitchen attached to it called Thai Me Up. The DIPA was simply called 2×4, and after hearing of this incredible DIPA, I shuffled my ass over to the festival to seek out this beast. What I found was not beastly, but was in fact a miraculous blending of malt and hops. When I found out that this beer was making its way south to Utah, I had to snag a fresh can and write it up for y’all. By the way, Thai Me Up/Melvin Brewing retained their crown the following year.

Description: Melvin’s 2×4 pours a somewhat hazy golden-amber color. Initially, there are about three fingers of frothy and sudsy off-white head. It slowly recedes to one finger over the course of a minute, leaving behind a thick, somewhat dense curtain of sticky foam that encircles the glass with a curtain of lace. As the head settles into a more permanent thin layer on top of the beer, you begin to get a sense of the beautiful aromatic nose. Off the top, there’s a pleasant mélange of tropical fruit and piney hops, full of juicy papaya, peach and mango. There is no fruit here, but the hops trick my nostrils with each sniff.  Alongside the fruit are complementary notes of grapefruit, tangerine, lemon and dank pine resin, all resting upon a bed of mild caramelized sugar sweetness. When a beer has the ability to grip your attention like this without so much as a sip, you know you’re in for a sensory ride.

The taste follows the nose. With the foundation already laid down, you can now get a sense of the beer’s architecture. First, there is some doughy, bready malt, heavy with caramel sweetness. The fruit from the aroma makes itself known next—now, it’s accompanied by a healthy dose of hop bitterness. I’m surprised to find a bit of pineapple and cantaloupe along with the papaya and grapefruit from the nose. As I get toward the end, peachy malt flavors round out the bitterness before the dank resiny pine reasserts itself, drying the back of the throat. The finish is earthy and has a very persistent drying effect, mingling with the slick fruit flavors that are left over from the tip of the tongue. It has a medium- to full-body feel as it sits in the mouth. The moderate carbonation levels feel more creamy than prickly on the tongue, keeping the senses from being overwhelmed as the beer comfortably slides down the hatch.

Overview: This DIPA is undeniably an impressive force of nature in a beer world that’s dominated more and more by resiny hop bombs. It’s a classic example of the West Coast IPA style. Though the tropical fruitiness can be somewhat overwhelming at times, I still find that the balance of super-drying hops complement the perceived slickness. This is one of those beers that reminds me of why I got into craft beer to begin with. To create such a symphony of flavors with just barley, hops, water and yeast must be the work of witches and wizards. The 2×4 DIPA is available at certain beer bars around the Wasatch Front, but it can only be purchased through special orders from DABC stores. I’m told this is being done so that these tasty beers don’t end up dying on the warm shelves of many of our local liquor outlets. The order form can be found at abc.utah.gov.