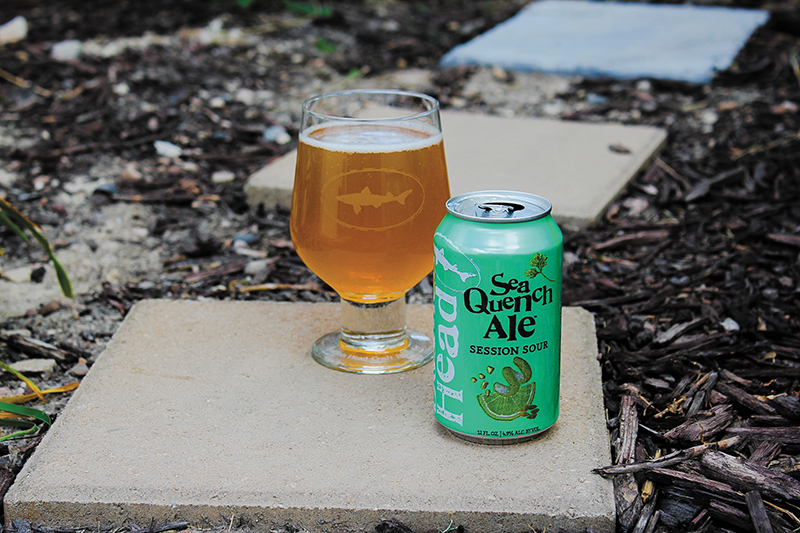 Beer of the Month: SeaQuench Ale

By Chris and Sylvia Hollands
November 1, 2018

Something weird this way comes to our beer market. Sam Calagione, founder of Dogfish Head Brewery (and arguably one of the most recognizable names in craft beer), raised the Utah flag surrounded by a sea of silver brewing equipment—and we are rightly stoked, to say the least. We are amped when big-name breweries come knocking on our door. Calagione helped spearhead the growth of the first wave of craft beer by positioning his Delaware-based brewery as one of the leaders in thought-provoking, experimental brews. Founded in 1995 with a tagline of “off-centered ales for off-centered people,” Dogfish Head has surely made a name for itself. Years ago, this brewery’s beers were among our most sought-after when we traveled out of Utah.

The initial lineup slated for our state includes several classics: Flesh and Blood IPA and the popular 60- and 90-minute IPAs. But the most interesting offering thus far is the session sour, SeaQuench Ale, a unique mixup of a gose, berliner and kölsch. It is a lower-alcohol-content beer brewed with black limes, lime peel, sour lime juice and sea salt.

Cracking the cold can, we can almost hear it whisper a hissing “welcome”—or maybe it’s just our excited ears playing tricks on us. Nonetheless, we transfer it into a name-branded goblet, which seems to fit this multi-category beer well. Loads of bubbles generate, creating a white, foamy head that dissipates swiftly. It pours a light-straw yellow that falls on the hazy side of the spectrum. As we dive in for the first investigative sniff, hints of graham cracker, citrus and zest are picked up. From the preview, we are expecting the beer to be extremely salty or overly sour. To our blissful surprise, the beer is neither. DFH has crafted a beer that is tremendously subdued in the sour department. Seeking to build on the adjunct ingredients, tart lime bursts upfront followed by sweet bread from the malts with a small touch of salt to polish it off. The flavor is well-balanced, crisp and refreshing. It’s a great thing that these were made sessionable for how crushable they are.

Dogfish Head Brewery is known for pushing the creative liquid limits. SeaQuench Ale seems to represent mature thinking, or a more mainstream approach. This is a beverage that will appease all types of drinkers—not limited just to beer, but wine- and margarita-lovers, too. From a brewery that has brewed beer using everything from corn chewed up and spit out by their staff to high-end ingredients like saffron, we may have been expecting something a little more adventurous. The initial offering coming to Utah via Delaware may seem a bit tame, but likely, this brewing powerhouse will slowly infiltrate the market with plenty of the odd ales we have come to know and seek out. Many of the local high-end beer bars have already started to special order additional DFH products, and there is no shortage of interesting beer to try. As mentioned before, we are always pleased when we get breweries to enter our shops. We just wish that this one was five years sooner because a beer like SeaQuench Ale would have been epic exploratory magic circa 2013. As of now, it’s just a pleasant, easy-to-drink, well-balanced beer we really enjoy.