You may have noticed a new advertising scheme that has developed over the past few years: co-branding and product collaborations. By utilizing this marketing tool, local and domestic brands can step outside their designated target audience and embrace those with similiar ideals. Brewvies, X96 and The Arts Fest are a few local organizations that have figured out the best collaborations are those that include alcohol.

Stop, Collaborate and Brew It! 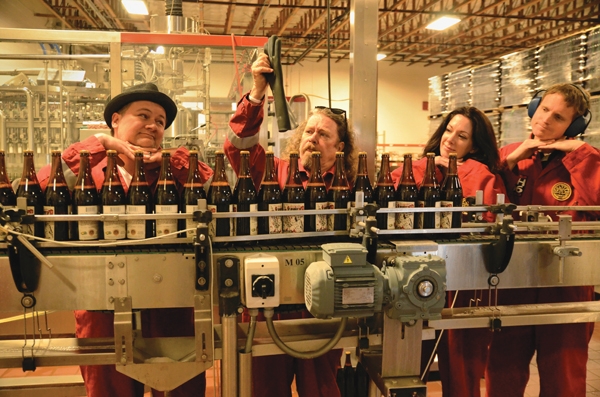 Kerry Jackson, Bill Allred, Gina Barberi and Richie Steadman, the hosts of X96’s Radio From Hell, played brewer for a day as they watched the first batch of Squatters’ Red as Hell Ale roll off the production line. Photo: Meredith Newsome

You may have noticed a new advertising scheme that has developed over the past few years: co-branding and product collaborations. By utilizing this marketing tool, local and domestic brands can step outside their designated target audience and embrace those with similiar ideals. Taco Bell and Doritos recently collaborated with the Locos Taco—yeah, everybody who eats tacos obviously likes chips (fatties)—but combining the two has been a complete failure. The taste is the same, but instead of greasy meat hands, I’m left with a cheesy substance in my palms that even a power washer has trouble penetrating. What they should have done is teamed up with a brewery! Brewvies, X96 and The Arts Fest are a few local organizations that have figured out the best collaborations are those that include alcohol.

Brewvies has been showcasing a unique co-branded beer since 2008: the Brewvies Irish Red provided by Roosters Brewing Company of Layton. “We wanted to provide our customers with a classy beer that couldn’t be found elsewhere,” says Andy Murphy, Brewvies’ General Manager. The idea had been in the air for years, but it wasn’t until Murphy was able to get together with Steve Kirkland, Roosters’ Brewmaster, that the collaboration came to fruition. “We had a void in the Irish Red Ale area. [Steve] mentioned he had been working on a nice red while home brewing, and came up with a 3.2 recipe that Roosters could make and provide for us,” says Murphy. By filling in the red category on the taps, Brewvies achieved a full range of local and domestic brews while providing a long-term partner with increased sales and a unique oppurtunity. The beer is offered exclusively on tap at Brewvies and has become a staple that continues to be one of the top sellers.

The Radio From Hell Red as Hell Ale came about when the co-hosts of X96’s Radio From Hell morning radio show, Bill Allred, Gina Barberi and Kerry Jackson, approached Squatters brewery with a request to co-brand. “We always thought it would be cool to have our own beer,” says Jackson. “We knew some guys somewhere that had a brewery and put a new label on an existing brew as a way to broaden their exposure.”  When they approached Squatters with the same idea, they said, no, “we have something special.” Although they had no ingredient input, the RFH hosts had the perfect idea for the label design, which was created by Mandate Press. The label artwork was originally concieved as a poster, which Mandate’s owner, Ben Webster, designed for the show as something to give away to fans. Jackson, Barberi and Allred fell in love with the poster while working on the beer at the same time, and suggested the poster to serve as the beer’s label art. “It was three like-minded parties coming together,” says Webster. After some tweaks to the original artwork to meet label requirements, it was up to the brewmasters. “We didn’t know what the beer was going to taste like until it came off the assembly line. It was cold, we tasted it and said OK, alright,” Allred says. Even Jackson, who admitted to not being a huge beer drinker, approved, and the product was shipped off to all Squatters locations, the Beer Store and state liqour stores around the valley. Offered exclusively in bottles, the 5.5% ABV ale has become a local favorite and will be entered into this year’s Great American Beer Festival, where it’s a front-runner for best Red Ale. The brew is currently sold in all liquor stores in Utah, but Amy Coady, Squatters’ Director of Sales and Marketing, warns that it isn’t unusual for stores to sell out within a few hours of delivery.

Over its 35 years, the Utah Arts Festival has always featured microbrews, but it wasn’t until the fall of 2010 that executive director Lisa Sewell was able to convince Uinta to collaborate on the Arts Fest Amber Ale.  The local brewery is currently the only featured microbrew at the festival. “[We thought] this would be a fun collaboration, since craft brewing is indeed an art form, and what better way to celebrate art than by drinking it?” says Sewell. The team over at Uinta came up with a light, refreshing amber ale and invited the Arts Fest committee over to partake in the process and first batch tasting. Eighty kegs were brewed and offered exclusively at the festival. “We had no idea whether the ale would be a hit or not. It was a jump into the unknown, but it was wildly popular! We kept tabs on sales and made bets on when it would run out. It was fantastic!” says Sewell. The Arts Fest Amber will once again be on hand at this year’s festival as a way to enhance the culinary arts experience.

Whether it’s to gain exposure outside a business’ typical market, offer a unique product or just for fun, brand collaboration has had an immediate impact on marketing. With more and more companies working together outside their designated realms, consumers will have the opportunity to try something new and support several local businesses. So take that little nest egg you earned selling smack on down to the nearest liquor store, movie theater or arts fest and help spread unity through the love of beer!