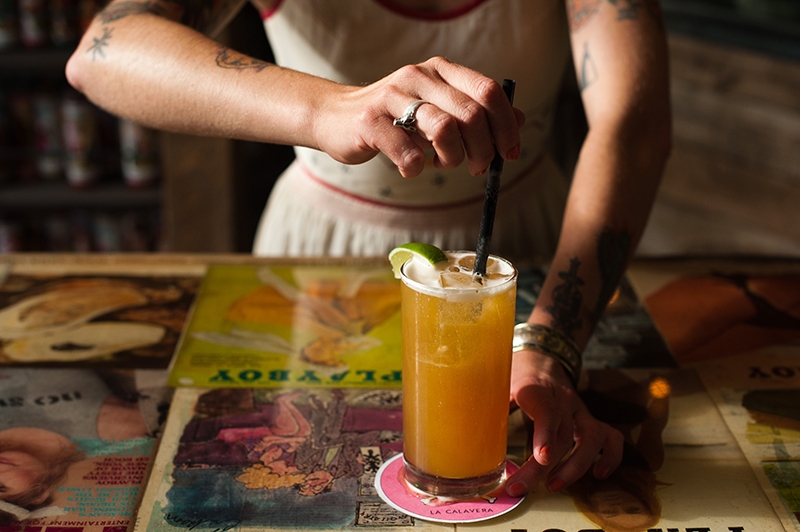 Tales of the Beer Cocktail

Photos: Russel Daniels
Made at Bodega, the Gabacho, garnished with a rosemary sprig contains gin, lemon juice and IPA. Photo: Russel Daniels
At its simplest, a beer cocktail is merely this: a drink with beer in it. Since there are no known texts on beer cocktails and no formal taxonomy that I know of, I’ve developed three categories of them. The first is Beer-Plus. This is the most basic and old-school type of beer cocktail, which is just beer with stuff added to it. The michelada (beer, lime juice, hot sauce, salt rim) and the boilermaker (beer with a shot of whiskey in it) are prime examples of this style. The second category is Classic Beer Swap. This type manifests when beer replaces an otherwise fizzy component in a classic, spirit-based cocktail, or when beer is simply added to an existing cocktail. The final classification is Transcendent/Innovative: beer cocktails that somehow go beyond the two previous categories and establish themselves as something more than just a drink with beer in it. For research purposes and, ultimately, to find a Transcendent/Innovative beer cocktail, I set out on a multi-day bar crawl in Salt Lake City. After spending nearly $200 and throwing back several disappointing drinks, I did experience some excellent beverages.
My first stop was O’Shucks, home of the $3.50 quart of beer, and I knew it would be the perfect place to drink some Beer-Plus drinks. After my drinking companions and I finished our requisite quarts of beer, I bought us all a round of the classic—albeit trashy—boilermaker, the Irish Car Bomb (stout, Irish cream, whiskey). We dropped our respective shot glasses of half Bailey’s and half Jameson into our glasses of Guinness beer and swallowed them in three seconds flat. I asked the bartender, Ronan, his thoughts on the whole thing. “I don’t judge,” he said, which must mean that he actually does judge, as do I—this drink sucks, and everyone knows it. It’s not Ronan’s or O’Shucks fault, though—we should have stuck with great beer at a great rate.
Beer Bar was my second destination. My first drink, made by bartender Britt Jursik, was great. It was the Dark and Stoutly (Gosling’s black rum, lime juice, simple syrup, ginger juice, stout), a Classic Beer Swap version of the Dark and Stormy. It uses Red Rock’s Oatmeal Stout instead of ginger beer to provide fizz and volume, and replicates the original with a boost of warming malt flavor. Jursik says that a good rule of thumb for beer cocktails is to match lighter spirits with lighter beers for refreshing drinks. For warming, feel-good beer cocktails, Jursik suggests dark spirits and dark beer. After the rum and stout’s fortification at Beer Bar, I traveled onward for more.
Walking into Bodega, I didn’t know that there I would find the best beer cocktails in Salt Lake.  When they first opened in 2013, the street-level tavern was fun and quaint beer bar—but basically a glorified waiting room for the downstairs cocktail bar, The Rest. Bodega has since expanded its square footage and its list of food and drink offerings, and has become a drink destination in its own right. Bartender Tristan Loughlin suggested a couple of his creations: the Gabacho (gin, lemon juice, IPA, fresh rosemary) and the Simpatico (almond tequila, orange juice, lime juice, hefeweizen). Although these are both variations on the classic Collins or fizz (spirits, lemon juice, sugar, soda), they were so delicious and unique-tasting that I put them in the Transcendent/Innovative category. Loughlin says that the Simpatico was his variation of the Brass Monkey (malt liquor, orange juice, Beastie Boys), but the balance of Almendrado almond tequila with lime juice really elevates it. Aside from the Simpatico and Gabacho, Bodega has a super-spicy michelada and several interesting boilermakers I’ll have to try.
A few days later, I made my final stop: Avenues Proper. I usually go here specifically to try Rio Connelly’s newest beers, but this time, I ordered all three of the menu’s beer cocktails. Although two of the three fell flat for me, the Proper Shandy (house Sam Dogger Lager, St. Germain, dandelion & burdock bitters, lemonade) was amazing. The shandy (beer, lemonade/ginger beer) is a classic Beer-Plus drink for people who don’t like the taste of beer in the first place, so I was surprised to actually enjoy this updated version. Instead of masking the flavor of a great beer, the additional ingredients greatly enhanced it. At risk of seeming too agreeable, I’m putting the Proper Shandy in the Transcendent/Innovative category, too.
I wanted to visit every bar in town and try every beer cocktail they’d make me, but that would have been beyond the reaches of my budget and my health. Like I said, this is an incomprehensive guide—I did the footwork, and now it’s your job to follow up. Sometimes you’ll think you should have stuck with beer, but when you find a good one, you won’t forget it. If drink research and taxonomy isn’t your thing and you’d rather just drink, meet me at Bodega’s monthly beer cocktail events throughout the summer. Follow @bodegaslc on Instagram or check out bodega331.com for details.
Photos: