Sure, paper menus are fine, but there’s nothing like having a real-time digital menu at your fingertips. After a few months, with little feedback on this tiny option in a tiny corner of The Bayou’s website, something odd began happening.

The Wheel of Beer 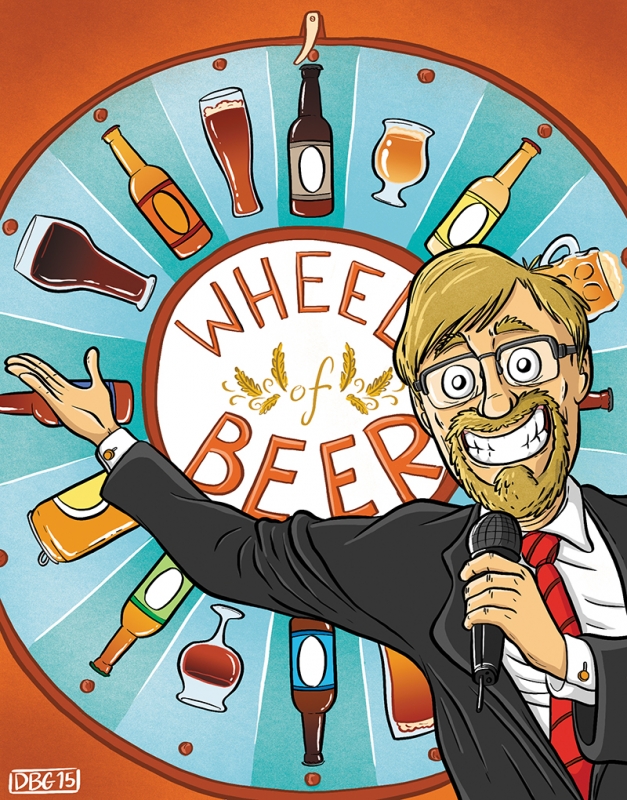 The Bayou owner Mark Alston implemented “The Wheel of Beer,” which randomly generates lists of 10 beers from The Bayou’s menu in real time on utahbayou.com. Illustration: D. Bradford Gambles

When a bar offers 300 beers for sale to its customers, the options can become a bit overwhelming to even the hardiest of beer drinkers. With practically every beer style under the sun at our fingertips, our brains can turn to mush fast, and the same, old, tired beers tend to creep their way back into our glasses. That’s one of the issues that The Bayou’s owner, Mark Alston, was trying to work out when he was revamping The Bayou’s menu and website. “Sometimes, I’d just get in a rut with the beers I was drinking,” he says. “I’d forget about all of these great beers that were sitting in the fridge or to revisit styles that I had steered away from for one reason or another.” His answer was to develop and integrate a random-beer generator as part of The Bayou’s new website. “The Wheel of Beer provided a fresh set of eyes and made me look at the menu in a new way,” he says. “It reminded me of why I loved craft beers as a whole, and it helped steer me away from my comfort zone when I needed to break away from the usual beers. I hoped my customers would find it useful as well.”

Well, the timing couldn’t have been better, since every palm in North America now has a smartphone surgically grafted to it and the real-time menu and website are easily accessible from the bar or table. Sure, the paper menus are fine, but there’s nothing like having a real-time digital menu at your fingertips. After a few months, with little feedback on this tiny option in a tiny corner of The Bayou’s website, something odd began happening. A group of The Bayou’s regulars began using the Wheel of Beer option on their smartphones, and took the random-beer generator to the next level and made their own little drinking game out of it. “When I first heard about how some of the customers were using the Wheel of Beer, I thought that it was pretty cool,” says Alston. “Ever since I opened The Beer Nut (a homebrew supply store) in the mid-’90s, I’ve tried to educate people about beer and what sets it apart from other adult beverages. I’m glad that customers are taking to it as enthusiastically as they are.”

The concept is simple. Using your smartphone, tablet, laptop or whatever, locate the Wheel of Beer link under the beer header on The Bayou’s website, utahbayou.com. Before touching the “Wheel of Beer” icon, you must commit to a number. Instead of randomly picking a number, it was decided by the mob (rule makers) that players should use the digits on your device’s clock to help you randomize the randomization even more. Since the Wheel of Beer randomly generates 10 beers and the clock time is based on numerals, you’re going to use the last number of the time displayed. Basically, if it’s 9:07, your number is 7. It doesn’t matter if you spin together or one at a time. Each participant must use their own device. This ensures that every list of beers will be different—no 10 beers will ever be the same for everybody, which adds more suspense to each individual outcome. There is no time limit in between spins, but you need to inform at least one of your friends that you’re spinning to avoid cheating. Feeling a little squeamish? You get one mulligan a week. Don’t piss it away.

Now, let’s “spin the wheel!” Remember, 7 is our number, counting from the top (or bottom, if you prefer). Take a look at the handy example we’ve provided. In this scenario, your selection would be an Anchor Liberty Ale from Anchor Brewing in San Francisco. Many consider this beer to be the original American IPA. This is the beer you’ve committed to drink—or take a mulligan on, if you haven’t used it yet. In order to keep your wits and your ability to get home intact, share your beer if needed. It adds to the camaraderie and keeps you honest in the game.

One night, I hung out with Kent and Bryan. Both men are regulars at The Bayou and know the beer menu fairly well. First up, Bryan spins, and his beer is Powder Hound from Big Sky Brewing. “Yes!” Bryan screams. “Love that beer.” Kent is up next. His beer is a Koningshoven Quadrupel. He’s not too happy. “I fucking hate quads,” he says, but Bryan and I are laughing hard as he runs his hands down his face. “I’m not drinking this all by myself.” We gladly help him enjoy his beer. My spin earns me a Rogue Double Chocolate Stout. I like mine—it’s like chocolate mousse in a glass. Kent was a little bummed, but Bryan and I drank ours (along with a bit of his) with stupid fucking smirks. Like any game of chance, you win some, lose some—that’s why we play them—but since this is beer we’re playing with, there really are no losers.

“I’ve currently got our new electronic menu board showing some random beer selections, if you want to bypass the phone idea,” Alston says. “Ultimately, it would be nice if I could just rig a button or something cool like that for people to use.” Once Alston implements that, the cheers and jeers that made our night better can be shared throughout the bar! He is also working on a Bayou app for iOS and Droid devices. To begin playing Wheel of Beer at The Bayou, visit their website at utahbayou.com.