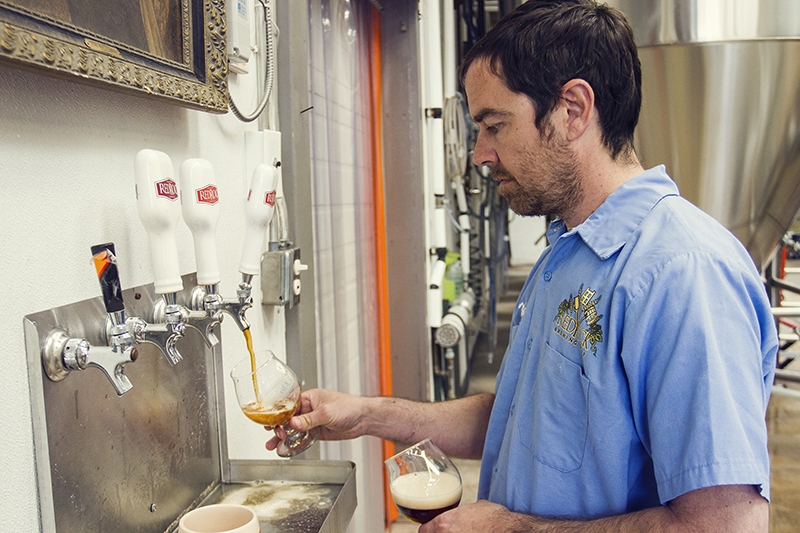 Malted barley, hops, water and yeast—if there’s one thing that beer has going for it in the world of fermented beverages, it’s the great diversity of flavors that a brewer can coax out of these four main and important ingredients. For many beer drinkers, when the word “beer” comes to mind, tastes of light-toasted grain and grassy/floral bitterness pops into mind. This is what mainstream beer has been for so many people over the last 120 years, but there is a style of beer that goes back centuries, which owes its existence to necessity and ungovernable factors: the wild ale.
Known typically as “sour” beer, this ale’s origins are derived from often-uncontrollable variances in yeast and hygiene. Wild ales were and are considered to be infected, spoiled or “green” mistakes in the brewing process. You definitely don’t want yeast strains such as Lactobacillus, Brettanomyces (Brett), and Pediococcus showing up in your IPAs, pilsners and stouts—they’ll destroy an otherwise tasty beer. But when you want some “funk,” a little “cheese” and some jaw-locking tartness, those “critters” mentioned above can create beautifully complex and extraordinary beers in those same styles—if done properly.
Locally, there are three breweries that have been experimenting with wild yeast strains to make some funky sour beers: Epic’s Elder Brett and Old Sage Brett, Squatters’ Fifth Element Farmhouse Saison and 529 Oud Bruin, and Red Rock’s Rêve Tripel and Paardebloem Dandelion Ale.
For years, I’ve been referring to Red Rock’s Brewmaster, Kevin Templin, as the “Beer Yogi” in my writings. His Zen approach to brewing gives his beers focus that incorporates a total togetherness of body and mind. Whoa … that’s some serious hippy beer shit right there! Because Templin has his annual release of Red Rock’s very special wild ale, Paardebloem, out right now, Templin’s name was the first to pop into my head. He has the perfect insight to describe wild ales to newbies. Plus, I got the chance to try the beers that have become such an important part of his life.
As Kevin and I walked around the Red Rock Brewing Company brewing facility, he had a lot of great insight on wild ales that breaks them down into terms that are easily understood. In 2001, while at the Great American Beer Festival, Templin came across a Brett beer that was aged in Chardonnay barrels. It was a life-changing experience for him, and after acquiring the recipe, he immediately got to work at home to duplicate it. That was almost 15 years ago. In that time, Templin and the rest of the brewhouse crew have had a lot of time to hone their skills on the wide variety of beer that have that “funk” factor, and can now turn them into some seriously challenging beers. “It’s like artwork,” Templin says. “It’s a version of what someone else has done before—it’s just a different interpretation on it.”
His interpretations have taken traditional styles and turned them into a slightly funky, stronger but quite drinkable version of themselves. “In the case of the Belgian Tripel, Rêve,” says Templin, “the way the tartness from the bugs plays off the sweetness of the base beer—it brings a nice balance of sweet and sour that I think transforms the beer into something else entirely.” Because of their transformative qualities, a good sour ale can last for hours instead of minutes in the glass. You’ll find layers upon layers of complexity that you won’t find in other styles of beer. Templin recommends that you “get romantic with the beer.” Treat them gently with a nice piece of stemware. Get to know what you like and dislike about different styles, but don’t just dive into into the most “sour puss” styles you can find. Fond of wines? Templin says these are great gateway beers that have some very some nice vinious qualities that can make them very appealing to those that typically don’t like traditional beers.
Red Rock’s Paardebloem (Flemish for dandelion) is a collaborative ale that was made with New Belgium Brewing Co. It was made during the hop shortage of 2007. Since brewers were having a tough time getting the hops they needed, beer makers had to be a little more innovative when it came to recipes. The two breweries decided to go with dandelion greens for bittering instead of hops. Combining these unorthodox ingredients with used Chardonnay barrels, more “funky critters” and a little time, they created a wild ale that is deeply complex and constantly evolving.
Paardebloem has earned numerous awards, including a Gold Medal at the 2012 Great American Beer Festival in the experimental beer category, a Gold Medal at the 2012 North American Brewers Association’s Mountain Brewers Festival, and recently, it won Gold in the Experimental Beer category at the 2014 World Beer Cup. Because it’s brewed in limited quantities, it’s only available at Red Rock’s three restaurants and bottle shop at 443 N. 400 W. in Salt Lake City. Looking to the future, Templin believes that sour/wild beers are the way of things to come in regard to the evolution of craft beer. Sour beers take you out of the beer box and put you into an exciting, ever-evolving brewing world. The world of beer is so vast and ever changing, I don’t think brewers have even scratched the surface of what beer really can be. Cheers!
Photos: