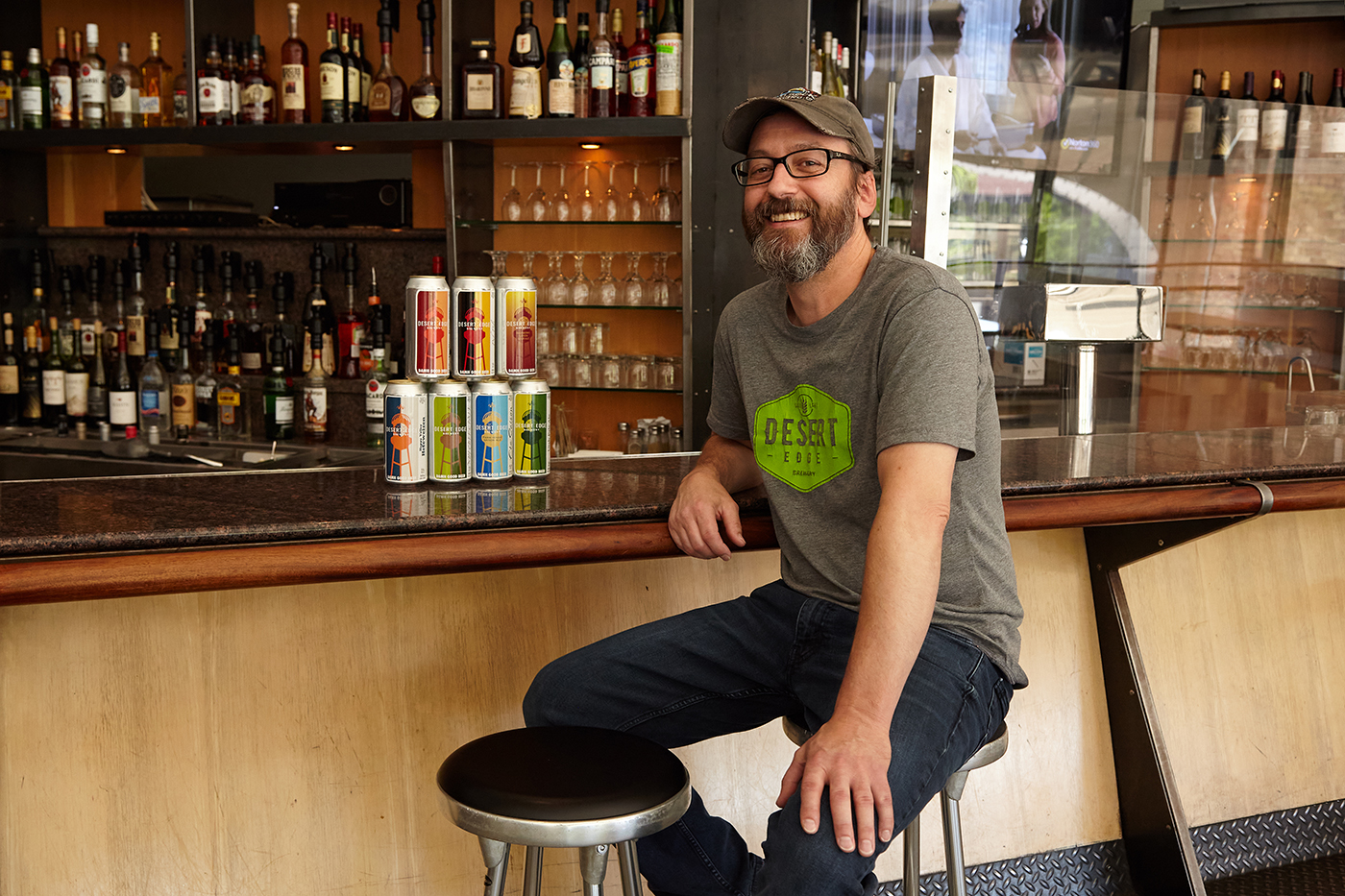 Desert Edge Brewery is Home to the Canned-Beer Comeback Kids

Desert Edge Brewery is a quaint, sophisticated and enduring little pub that’s been nestled in a far corner of the beautiful, historic Trolley Square for numerous years. Having survived the better part of three decades, Desert Edge has come to know its dedicated customers like family. Bouncing back with their enthusiasm for small-batch brews after a tough year, this established neighborhood pub has made the creative pivot to help its loyal customer family grow via their now-available small-batch canned beers to-go.

“It was such a cool change to small-scale pub brewing.”

Head Brewer Chad Krusell joined Desert Edge five years ago after his first official beer-making stint with Uinta, having gone from homebrews to Staff Brewer to head of brewing there over a decade-long tenure. “It was such a cool change to small-scale pub brewing,” he says with a grin, speaking to the decision to change lanes from Uinta after numerous years. Krusell is now essentially a one-man band in the back room of Desert Edge Brewery, with support of his occasional assistant and staff servers.

Desert Edge has been housed in Trolley Square perennially, offering a stable presence for Downtown locals who love good food and good brews. In 2020, Krusell and his Desert Edge team faced a stark adjustment to their forms and functions amid the pandemic’s slamming closures. “It was taking it day by day—‘don’t fill the tanks all the way; adjust batch sizes and reduce how many beers we offered,’” Krusell says. “Before the shutdown, we had 10 [then] went down to just our four staple beers [the Latter Day Stout, Happy Valley Hefeweizen, Pub Pils and Utah Pale Ale].” That drop in business was part of the pub losing two-thirds of its usual traffic over the ordeal, which is only starting to speed up over the past month or so, according to Krusell.

Talk of expanding their offerings into packaged products had occasionally come up among Desert Edge staff and longtime customers for a while, and the shock of 2020 opened the valve on revisiting the notion. “We originally went towards canning to get around the draft law and offer IPAs with higher ABV,” Krusell says. “We hoped to do maybe three beers, and when the shutdown happened, we decided to pivot.” Late last year, Krusell acquired a small hand-canning setup that he lovingly wedged against the back wall of the already-cramped brewing space and proceeded to get truly crafty. He wanted to keep the operation as fresh and small-batch as possible maintaining the highly personal and intricate aspects of Desert Edge’s general modus operandi.

“We originally went towards canning to get around the draft law and offer IPAs with higher ABV.”

Krusell carefully curates every step of the canning process, including designing and affixing each label to every can. Each working day, Krusell and Desert Edge staff pop in their headphones and fill, label and stamp each can by hand. “That’s what we like; that’s the basis of this business. We’re the old neighborhood pub—everything is made and served right here,” says Krusell. Truly, Desert Edge’s packaged beers are as artisan and “handmade” as any drinkable creation can be. It’s a remarkable thing to hold a cold, fresh beer that was made so painstakingly. Their canned beer is currently available only at the pub and one other location, Stella Grill, attesting to the extremely limited production density and availability thus far.

Krusell hand-cans beers based on what’s on tap or seems needed. The spontaneity and immediacy of the process requires his constant attentiveness and commitment, the mark of a dedicated brewmaster. His current array of canned beers includes Desert Edge staples Pub Pils, Happy Valley Hefeweizen and Utah Pale Ale, along with several emerging versions of his Trolley Rye IPA. Krusell is also currently working on a couple higher-ABV porters and barley wine styles for a planned fall series, marking the potential for several specific seasonal offerings on rotation.

“It’s so new and evolving, but our plan at the moment is to always have a high-point IPA, our staples and another seasonal, high-ABV offering,” Krusell says. “I’d like most of our canned beers to be our high ABVs.” Eventually, Desert Edge plans to consistently offer the three aforementioned staples plus three additional high-point canned beers year-round. Krusell takes pride in the freshness and consistency of flavor in his beers, and the canning process is no different. Although he attests to minimal or no flavor changes to the beers in packaging, he remains committed to canning fresh and small batches to assure that customers will crack open the best true-to-form flavor.

“It’s so new and evolving, but our plan at the moment is to always have a high-point IPA, our staples and another seasonal, high-ABV offering.”

So far, customers are excited that Desert Edge has joined the canned–craft beer cohort in Salt Lake City. The intimate, micro-batch nature of their endeavor stands out in the ever-growing local brewery community. “My biggest hope is to remind folks that we are here,” Krusell says. “We don’t have plans for massive growth and world domination; we’re just a neat place to come.” Desert Edge is a resilient member of our dining culture and a wonderful oasis that deserves to be better known. Desert Edge is open for lunch and dinner (dine-in and take-out, which includes their canned beers) every day. Find out more at desertedgebrewery.com.