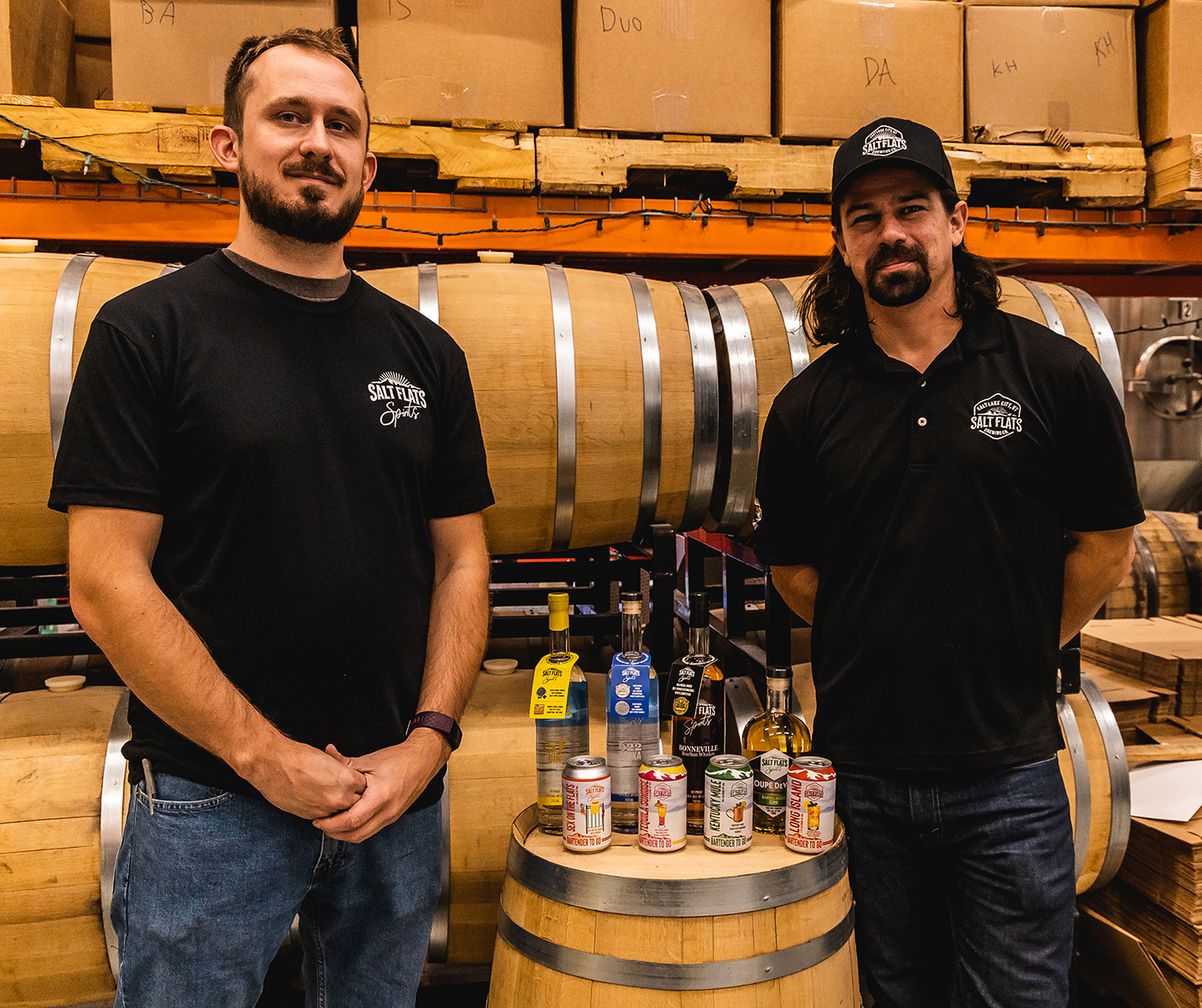 It’s no wonder that Steve Pruitt, owner of Salt Flats Spirits, would be a driving and dynamic force in Utah’s growing local liquor market because of his background as a professional race car driver and team owner. “Salt Flats is unique in the aspect that we have a rich history blended into each and every product,” says JC Straub, the Operations Manager of the distillery and its sister company Salt Flats Brewing Co. Housed in Pruitt’s former racing facility, Straub says the building has “a rich history of racing culture,” which can be seen in the cars, tools and trophies that still fill the space. He adds that “the racing history in our operation inspires us to be high end and competitive.”

With its eyes set on the finish line, Salt Flats has achieved an award-winning line of spirits since beginning operation in 2019 with featuring a selection of bottled vodka, bourbon, whiskey, gin and rum. Each product pays homage to racing culture beyond simply slapping a checkered flag onto its products. Rather, Salt Flats seeks to “celebrate the cues, signals, symbols and aspects of being a true race fan,” according to its website. This is best seen in its sleekly designed bottled spirits, many of which feature an image of the Bonneville Salt Flats and bright, race-stripe-esque designs. They also feature racing-inspired names like GT Gin (standing for Grand Tourer), Bonneville Bourbon Whiskey and 622 Vodka after Gary Gabelich’s car that set the land speed record in 1970 on the Salt Flats.

“We have a rich history blended into each and every product.”

Additionally, Salt Flats has a Bartender To Go line of canned cocktails, which can be found in liquor stores or its bottle shop. “We have put together a variety of canned cocktails that don’t exist in the Utah market,” Straub says. “They are innovative and different from what [our] competitors are doing. We only use all-natural ingredients and everything is made in-house, including the ginger beer we use in the [Kentucky] Mule and the cola we use in the Cuba Libre.” Other canned cocktails include the classic Long Island, Tequila Sunrise made with fresh orange and cranberry juice, Sturgis Lemonade, Gin Spritz using fresh lemon juice and Sex on the Flats (a classic take on a sex on the beach, only renamed to be more fitting to Utah).

Salt Flats Spirits operates under Equiwest Hospitality Group, which includes the sister brewery, the Garage Grill in Draper and Toscano Italian Bistro in Sandy, with a second Garage Grill in Herriman set to open soon. Products from Salt Flats Spirits (and the brewery) are used in cocktails at both Toscano and Garage Grill, directly connecting them to consumers and allowing for a distinctive refining process. “We also operate multiple restaurants, and this gives [us] a chance to hear a vast amount of direct consumer feedback so we can continually adapt and improve our products,” Straub says.

“We only use all-natural ingredients and everything is made in-house.”

When asked what his favorite spirit is, Straub says it is hard to say because each spirit is unique to the “time and place.” However, he adds, “I will say our 622 Vodka is a premium product that is distilled from organic french wheat and corn and is incredibly smooth. 622 is newly listed with the state liquor stores and will be available within the next month. It is—of course—always available at our distillery.”

With a “bright” future ahead, Straub says Salt Flats currently sells products in three states and “are continuing to grow each and every day.” You can find Salt Flats Spirits at saltflatsspirits.com or visit both the distillery and brewery at 2020 W. Industrial Circle on Sun.–Mon. from 11:30 a.m. to 3:30 p.m. or Tues.–Sat. from 11 a.m. to 7 p.m.