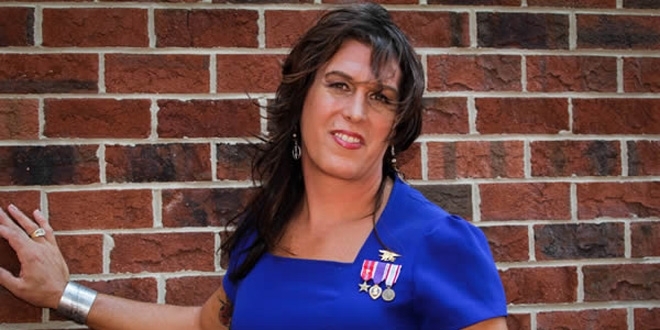 Being Human is Not a Crime: Interview with Kristin Beck

The month of November shares two important observances in the U.S.: Veterans Day, which honors U.S. service members, and Transgender Day of Remembrance, which memorializes those who have been killed as a result of transphobia. One might think it inconceivable that the two could be celebrated by the same population, though retired United States Navy Seal Kristin Beck—along with the estimated 15,000 transgender service members and veterans in the U.S.—is eager to change such a mindset. SLUG spoke with Kristin about her experience on the front lines of this fight and her lifelong service in the name of justice for underrepresented people.

Though our conversation began with small talk, I quickly discovered that nothing in Beck’s life experience is small. The day prior, she was interviewed on Al Jazeera in Washington D.C., and then spent some time at the White House advising staffers on how to better implement Obamacare for the country’s trans population.

The documentary film Lady Valor, which won the Audience Award at this year’s Damn! These Heels LGBTQ Film Festival, documents Beck’s decorated military career and current life in the public eye. In 1990, Beck joined the U.S. Marine Corps and later became a Navy Seal. Over the following 20 years, she took part in 13 deployments, seven of which were combat deployments. She retired from the Navy in 2011 and began her latest, most challenging mission in 2013 after publically revealing her gender identity— to raise awareness of transgender issues. Since coming out with her gender identity, Kristin has become one of the highest profile transgender figures in the U.S..

Living a life against the grain has been the norm for Beck since her teenage years. In high school, Kristin sported a mohawk and listened to punk and hardcore bands such as Black Flag, Suicidal Tendencies and Circle Jerks. A downhill skateboarder since the ’70s, Kristin also shredded on a Burton board in the early ’80s. “It was this basic piece of bent plywood with no edges, no nothing. It wasn’t anything like snowboarding nowadays.” Her early days as a skateboarding punk, and the internal conflict of having her gender identity diverge from the gender she was assigned at birth, honed Beck’s empathy. “Just because you have an outfit on, you can’t judge a person by that,” she says. “I still lived a life of integrity and still sought out justice in my own ways,” she says. Much like the skateboarder’s slogan “Skateboarding is not a crime,” Beck sums up the trans struggle with, “Being human is not a crime.”

Beck’s high profile transition thrust her into a national spotlight. Such a position has attracted the attention of supporters and detractors alike. One problem Beck is up against is misgendering, or referring to a person using terms that express the wrong gender, either accidentally on purpose. It’s a huge issue that the transgender and gender non-conforming communities still face. “It does bother a lot of transgender people,” she says. “It bothers them that they have before photos, and it bothers them that people use the old name or bring up anything about your old life. We’re always judging people by how they look. Nobody wants to see the real person.”

When asked about her service in the military, as a now openly trans woman who would be barred from serving under the Department of Defense’s instruction 6130.03, Beck doesn’t hold any regrets or bitterness. “My old life is still my life,” she says. “That person Chris, that Navy Seal, that bearded dude—that’s still me. Just because you changed your clothing and your hair gets a little longer, it doesn’t change who you really are.”

“Once people make a mistake,” Beck says, “I can’t be angry at ’em, ’cause maybe that’s what they still see, or they haven’t noticed or haven’t seen a change. I have to give them the benefit of the doubt, at least for a little while, and let them grow or understand in their own way. And you know when somebody is being offensive, when somebody starts misgendering and saying ‘He’ and using all male pronouns and using my old name—I know if they’re doing it to bring offense. You can tell. If they start doing it offensively, then yeah, I’ll make a point to it, I’ll say something.”

It is difficult to alter one’s perception of an individual based on years of an already established relationship, but it is a challenge worth taking on. “Most people—my friends and even my family—when they’re [misgendering], they’re going to figure it out,” Beck says. “And if they don’t, then they don’t, and that’s their own loss—it’s their loss for not seeing somebody’s spirit.”

To those who still resist giving transgender individuals the respect that is any human being’s birthright, Beck is still hopeful. “All they see is this outer covering, all they see is the clothing or the hair—the spirit is what people should see,” she says. “They color of my skin doesn’t count, how long my hair is doesn’t count, it’s who you are inside that counts. And that’s what a lot of people come to see—they see me for who I am, regardless of what my name is or what my gender is or anything else—you need to see me. We’re all individuals, we’re all equal, we should all be treated with respect and dignity.”

While there are many within the radical trans community who would prefer to abolish the military altogether, Beck is proud of her service—and bridging gaps between divided communities and bringing attention to underrepresented groups is essential to her new mission. “I’m proud of my service,” she says. “I’m proud of my country. We do make mistakes and it’s not always perfect. It’s not always exactly right. I’m proud of the fact that there are a lot of people working really hard to always do the right thing. I’m proud of the overall goodness that our country does bring to this world.”

Follow Kristin Beck on Facebook and Twitter @TheLadyValor as she continues to travel the country to educate about transgender communities—you may even see her on the Utah slopes or drinking Polygamy Porter at one of our local bars. Watch Lady Valor on Amazon On Demand.