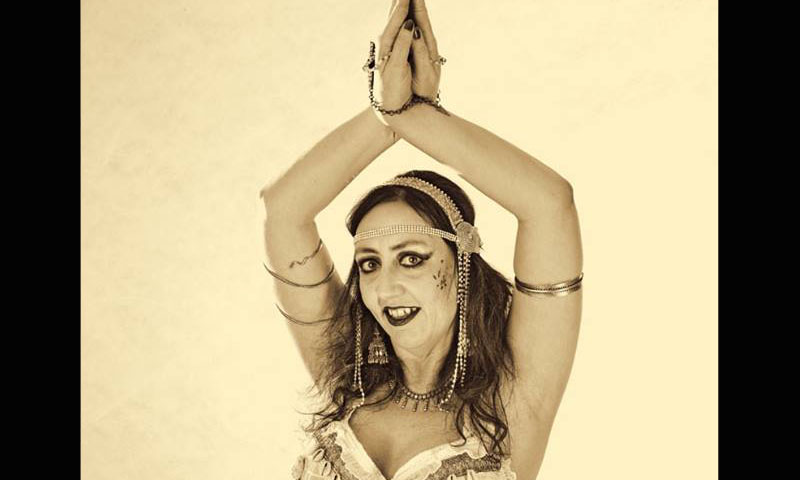 Nikia Amira, a favorite dancer from Ogden, Utah has only been dancing for six years. Six years ago she had never watched a belly dance performance. When a friend invited her to a belly dance class, she didn’t think she would like it very much. After one class with Mashara Rabia, she was bitten by the bellydancing bug, and, four months later, she was performing at Tribes. Nikia Amira’s extensive training in classical ballet, jazz, and musical theatre, made belly dancing a natural fit. She brings her dance background, her sweet personality, and her acting ability to the belly dance stage and performs her magic. She loves Egyptian Cabaret and Egyptian Pop style of Middle Eastern Dance, and her interpretations are fun, flirty, and refreshing. Nikia Amira’s drum solos are spectacular, exciting, and dead on.Nikia’s classes with Mashara Rabia were her introduction to belly dancing. “Mashara moved so beautifully and was so sensual. It was the most beautiful dancing that I had ever seen,” said Nikia. “I fell in love with the mystery and the femininity of the dance. Mashara gave me a solid foundation in belly dancing.”

In 2001, Nikia began taking classes with Midnight Mirage and within six months, she was asked to join the Midnight Mirage Dance Company. As a member of the troupe, she traveled and danced all over the Western United States and competed in the Wiggles of the West dance competition, which they won in 2002.

“My dance style was really formed by Midnight Mirage,” Nikia explains. “I was their baby. My love of Egyptian pop and Egyptian Cabaret was a directly influenced during my year with Isis, Jamileh, and Calypso. The women of Midnight Mirage were my mentors and still are.”

Nikia Amira has also studied with Suhaila, Jillina, Hadia, Suzanna del Vecchio, Delilah, and Aziza. “My favorite dancer today is Hadia,” said Nikia. “I really appreciate the way she captures the essence of the dance. I love the way she dances. It’s so non-invasive.”

After a year with Midnight Mirage, Nikia Amira left to have her second baby, Sophia. Today, she is the creator and director of the Whispering Sands School of Dance with 40 students, and a dance company that has been together one year. Nikia Amira and the Whispering Sands students will be performing at the Utah Belly Dance Festival the end of August, the Idaho Belly Dance Festival in September, Tribes in the fall, and the Hot Air Balloon Festival at Wolfcreek Resort. She is also a regular performer at the Athenian Restaurant in Ogden on Thursday nights.

Nikia Amira is a talented, beautiful, and delightful dancer and person. Her drum solo work is deadly! Her students perform continually with sophistication and professionalism. At age 27, she has been in a nationally acclaimed dance company, performed around the United States, and has a successful school of dance. With people like Nikia Amira, belly dancing in Utah has a bright and creative future.