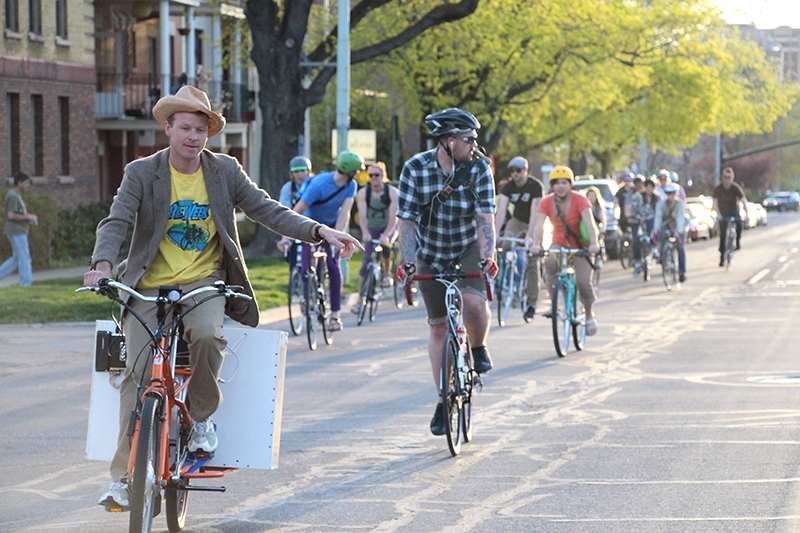 Meeting up at Colin’s house, I watched as the two loaded a customized speaker box onto the back of Colin’s Yuba Mundo Cargo bike. “On our first ride, we had a smaller Block Rocker stereo that didn’t carry sound very well to the whole group of riders, so we built this,” Colin said as he secured the large, white speaker box they call “The Violator” onto his cargo rack. The weight of the box lifted the front tire off the ground as Phil explained the beginnings of the SLC Bike Party. He says, “Almost two years ago, there was a concerted effort during Bike Month to hold a ride that was billed as a Critical Mass ride, which kind of had a connotation of riders running red lights and blocking intersections and traffic, but a lot of riders wanted to follow the rules … and a lot of people didn’t know what was going on. It seemed like people wanted a ride that was following the rules of the road and was still fun.”
Phil had seen a bike party while in San Jose and thought the idea could take hold in Salt Lake as a less intense option for cyclists wanting to enjoy a ride in the city with a big group, so he began talking with Colin about getting a party going in Salt Lake. Nearly a year ago this May, they set out on their first bike party, which grew throughout the summer as they continued to hold monthly themed parties on wheels that they primarily promote on Facebook.
Once The Violator was in place and blasting Kriss Kross’ “Jump,” we were off. Colin and Phil certainly brought the party as we headed to the rendezvous spot at the City County Building Downtown. People pumped their fists in the air to the music as we passed. The mere sight of our small group on bikes blasting music created the atmosphere of a parade everywhere we went, and we hadn’t even met with the other riders yet.
Arriving at the City County Building, we found a group of 20 or so other riders waiting for us. Each ride has a theme, and tonight’s was “Thrift Store Fashion Show.” Some riders sported shabby-looking jackets with mismatched pants and crazy hats. After a group photo, Phil took a moment to recap the general rules of the road before the group set out. Will Smith’s “Summertime” a bit preemptively yet, nonetheless, appropriately blared out of The Violator as we all straddled our bikes and pedaled into the warm evening air. There was no specific route in mind for the night, but no one seemed to care as some riders waved an arm to the music or moved their heads rhythmically as they rode. “Originally, we tried planning the routes,” Phil says, “but eventually, we decided to just have Colin lead the group, since he has the music and probably knows Salt Lake City better that anyone I know.”
Colin described a typical ride as roughly eight miles, and takes just around two hours as the party weaves throughout the Salt Lake grid. “This is a great ride for all abilities and ages. If you slow down, we’ll wait,” he says.
We rode toward South Temple and then toward City Creek and the Temple. Not a horn was heard, and the only screams we heard from onlookers were enthusiastic or singing along with The Violator. Our ride continued on through The Gateway Mall and then back up to Main Street as we all enjoyed the cooling air and an amazing sunset. Periodically, a rider or two would drop off, only to be replaced with another random, two-wheeled companion who happened to be passing by, and within moments, we were all singing together like old friends. Colin and Phil modeled the friendly atmosphere well as they greeted all in sight and quickly got to know all who rode beside them. After our ride took us through Liberty Park and back to the City County Building, all riders had dropped off, and as Phil, Colin, and I took a moment to take in the evening, something that Phil had mentioned earlier really set in for me. “I never made a friend because I was driving in my car.” I knew then that I would be back again next month to ride, sing and party.
The SLC Bike Party meets once a month, and to find information on upcoming rides and themes, you can follow them on Facebook at facebook.com/SLCBikeParty.